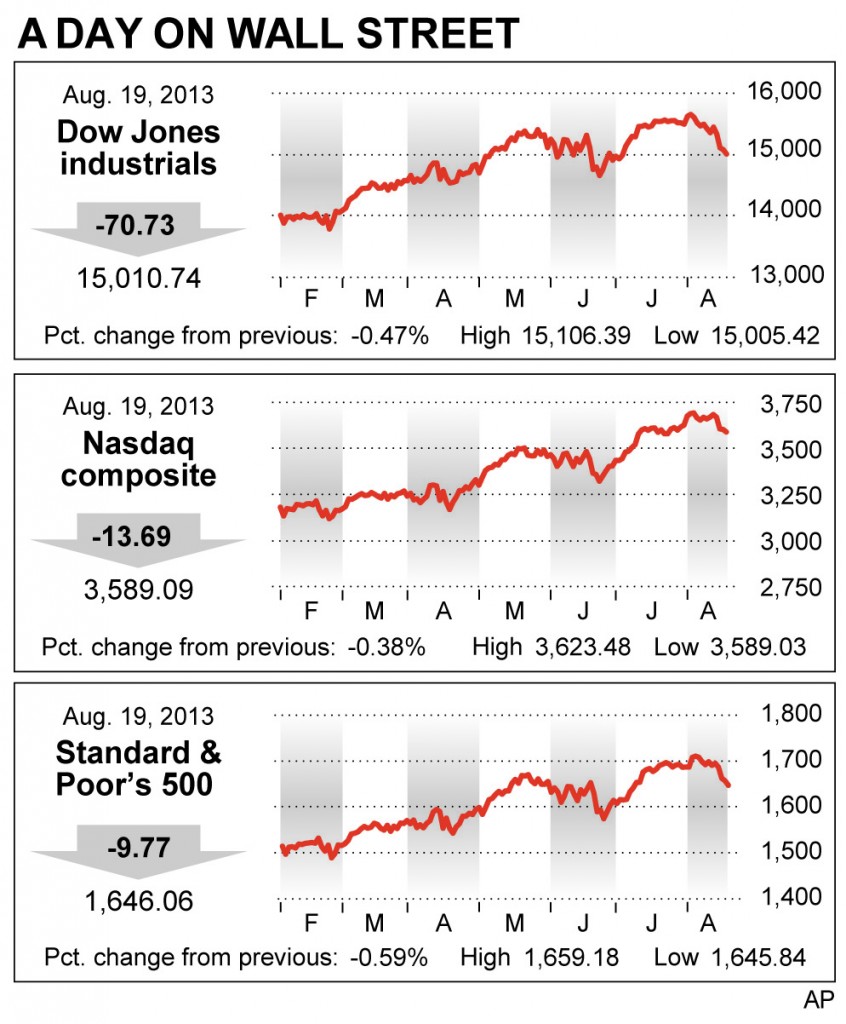 U.S. stocks dropped for a fourth day in a row Monday as investors continued to express worry about the recent rise in bond yields. Banking stocks also dragged down the broader market.

Investors had little data to digest Monday, so the focus for many remained the ongoing climb in bond yields. The yield on the benchmark 10-year Treasury note rose to 2.88 percent from 2.83 percent Friday. Yields are at their highest level since July 2011.

The 10-year yield has been rising sharply from a recent low of 1.63 percent reached in early May as the economy has improved and as investors anticipate an end to the Federal Reserve’s huge bond-buying program as early as next month. The program has been keeping interest rates low to encourage borrowing and hiring.

Homebuilders were hit hard on Monday as traders worried that higher mortgage rates could upset a recovery in the housing market. Lennar, PulteGroup and D.R. Horton all fell roughly 4 percent.

Some investors expect that the 10-year note could rise above the psychologically important 3 percent mark as early as month’s end.

Bank stocks moved lower after a report from the Federal Reserve appeared to indicate that large bank holding companies — firms such as JPMorgan Chase & Co., Citigroup, Bank of America and others — could need to raise additional capital.

In the report, the central bank said large banks had made “substantial improvements” in how they plan for future potential financial crises; however the Fed also said there was “considerable room for advancement.”

Banks have faced intense regulatory pressure to increase their capital ratios — the amount of money they hold in reserve — since the financial crisis five years ago. Several banks that failed, including Washington Mutual, Lehman Brothers and Bear Stearns, were criticized for not holding enough capital to protect their balance sheets from the losses stemming from bad mortgages.

Investors should expect more focus on the Fed this week. On Wednesday the Federal Reserve will publish the minutes of its July policy meeting, and on Thursday the Fed starts its annual conference in Jackson Hole, Wyoming.

The Fed minutes will be the most important item for investors this week, said Kristina Hooper, head of investment and client strategies for the U.S. at Allianz Global Investors.

“It will give us insight into what the Fed is looking at to decide,” Hooper said. “I don’t think the Fed has made up its mind on what it’s going to do in September yet.”

A sell-off in retailers continued Monday. Saks, the luxury retailer, reported a wider loss two weeks after agreeing to be bought by the Canadian retailer Hudson’s Bay, the parent company of Lord & Taylor, for $2.4 billion.

The retail sector got off to a dismal start last week after Wal-Mart, Macy’s and Nordstrom cut their sales outlooks for the year. This week, J.C. Penney, Target, the Gap, Home Depot, Sears and others report quarterly earnings. The retail industry is often closely watched by investors because consumer spending makes up a large chunk of the U.S. economy.

One bright spot in Monday’s sea of red were technology stocks. Intel was biggest gainer in the 30-member Dow after getting an upgrade from PiperJaffray. The investment bank predicted strong sales for chips used in tablet computers and mobile devices. Intel rose 37 cents, or 1.7 percent, to $22.28.