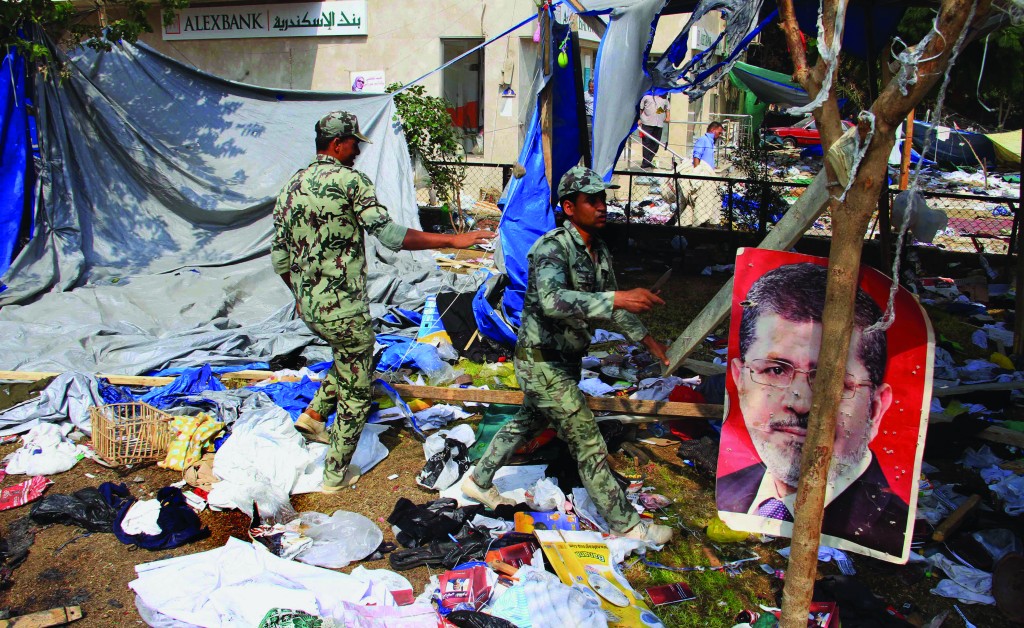 Supporters of Egypt’s Muslim Brotherhood stormed and torched a government building in Cairo on Thursday, while families tried to identify hundreds of bodies piled up in a Cairo mosque a day after they were shot by security forces.

Egypt’s Health Ministry says 638 people were killed and thousands wounded in the worst day of civil violence in the modern history of the most populous Arab state.

Brotherhood supporters say the death toll is much higher, with hundreds of bodies as yet uncounted by the authorities, whose troops and police crushed protests seeking the return of deposed President Mohammed Morsi.

State media quoted the Interior Ministry as saying the security forces would use live ammunition again to counter any attacks against themselves or public buildings.

The U.N. Security Council was expected to meet on Thursday to discuss the situation after a meeting was requested by council members France, Britain and Australia.

International condemnation has rained down on Cairo’s military-backed rulers for ordering the storming of pro-Morsi protest camps after dawn on Wednesday, six weeks after the army overthrew the country’s first freely elected leader.

The U.S. State Department said it would review aid to Egypt “in all forms” after President Barack Obama cancelled plans for upcoming military exercises with the Egyptian army, which Washington funds with $1.3 billion in annual aid.

“The United States strongly condemns the steps that have been taken by Egypt’s interim government and security forces,” Obama said.

“We deplore violence against civilians. We support universal rights essential to human dignity, including the right to peaceful protest.”

His Defense Secretary Chuck Hagel warned Egypt’s army chief that “the violence and inadequate steps towards reconciliation are putting important elements of our longstanding defense cooperation at risk”.

Western diplomats have told Reuters that senior U.S. and European officials had been in contact with Egypt’s rulers until the final hour, pleading with them not to order a military crackdown on the protest camps, where thousands of Morsi’s followers had been camped out since before he was toppled.

There were reports of protests on Thursday but no repeat of the previous day’s bloodbath. In Alexandria, Egypt’s second largest city, hundreds marched, chanting: “We will come back again for the sake of our martyrs!”

Brotherhood spokesman Gehad El-Haddad said anger within the 85-year-old Islamist movement, which has millions of supporters across Egypt, was “beyond control”.

“After the blows and arrests and killings that we are facing, emotions are too high to be guided by anyone,” he said.

The Brotherhood has called on followers to march in Cairo later on Thursday, while funeral processions for those who died could provide further flashpoints in the coming days.

In the Giza section of Cairo, Morsi supporters set fire to a governorate building, and state media said two police officers were killed in an armed attack on a police checkpoint.

Army chief General Abdel Fattah al-Sisi removed Morsi from power on July 3 in the wake of huge protests by people frustrated at a lack of progress on economic reform and wary of what they saw as a creeping Islamist power grab.

The subsequent crackdown suggests an end to the open political role of the Brotherhood, which survived underground for decades before emerging as Egypt’s dominant force after autocrat Hosni Mubarak was toppled in a 2011 uprising.

“It’s not about Morsi any more. Are we going to accept a new military tyranny in Egypt or not?” Haddad said.

Shocking scenes, including footage of unarmed protesters dropping to the ground as security forces opened fire, have been seen around the world, but many Egyptians support the crackdown and resent international criticism of the army.

“What happened was the only logical way to end their sit-ins, which did have weapons and … violent people,” said Ismail Khaled, 31-year-old manager in a private company. “Thank G-d the police ended them. I wish they had done so sooner.”

The authorities and their allies, which control nearly all media inside Egypt, insist those inside the pro-Morsi camps were heavily armed, although international journalists have seen only limited evidence of weapons beyond sticks and rocks.

Churches around the country were attacked and many torched on Wednesday, stoking fear of an Islamist backlash among the Christian minority, 10 percent of the population of 85 million.

Most large Egyptian companies remained open and shipping sources said the Suez Canal was operating normally, but the stock exchange was closed and the central bank told all banks to stay shut. Some international firms halted production in and around Cairo, including Electrolux and General Motors.