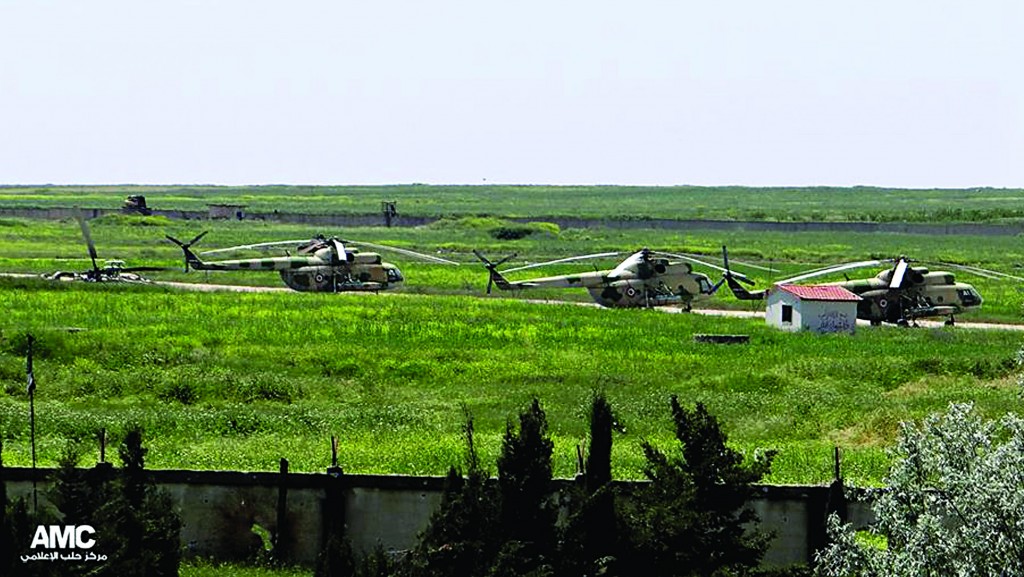 A car bomb in a pro-regime district near the Syrian capital killed at least 18 people on Tuesday while rebels captured a major air base in the north and swept through a string of villages in the heartland of President Bashar Assad’s minority Alawite sect in the west.

The push by the opposition fighters is shaping up to be one of their strongest campaigns against government forces, which have recently captured significant territory in central Syria.

There was no immediate claim of responsibility for the attack. Rebels fighting to oust Assad have frequently targeted areas where regime supporters and members of the government and security forces live. Rebel groups linked to al-Qaida have claimed some of the deadliest car bombings and suicide attacks in the capital and beyond.

In the north, rebels captured a major air base, depriving Assad’s forces of a main post near the border with Turkey and opening up a key road for supplies for their fighters from the neighboring country.

The Britain-based Syrian Observatory for Human Rights said members of the al-Qaida-linked Islamic State of Iraq and the Levant led the battle for the Mannagh helicopter base.

After months of trying to take it, the rebels launched an all-out offensive on Monday, when a Saudi suicide attacker blew up his vehicle outside the command center, the Observatory said. They captured the sprawling compound before dawn Tuesday, according to another activist group, the Aleppo Media Center.

State media denied the base had fallen, and SANA said the nation’s “armed forces are confronting terrorists with great courage” inside the base. Assad’s regime refers to opposition fighters as terrorists, claiming they are part of a conspiracy by the West and Gulf Arab countries like Saudi Arabia to destroy Syria.

At least 10 rebels, including foreign fighters, were killed in the fighting, according to the Observatory, which also said rebels had taken prisoner a number of government troops. Rebel victories have been comparatively rare in recent months, and Assad’s forces have been on the offensive in central Syria.

Mannagh, in the northern Aleppo province, is deep inside territory dominated by the Syrian opposition. Rebels have been trying since last year to capture it, but faced strong resistance.

Rebels seized a part of the base in June and since then its fall had been widely expected. It’s the largest base to fall to the rebels since opposition forces captured the Taftanaz base in the northern province of Idlib in January.

Syria’s main opposition bloc, the Western-backed Syrian National Coalition, hailed the capture of the base, saying rebels “fully liberated the Mannagh air base and will transfer it from a regime tool for oppression to a minaret of liberation.”

“Thanks to G-d, the airport was fully liberated and here are the spoils,” a narrator said on an amateur video, as rebels posed in front of an APC and green wooden ammunition boxes.

The capture of Mannagh could now free hundreds of opposition fighters to reinforce other fronts.

Syria’s conflict has taken on an increasingly sectarian tone in the last year, pitting predominantly Sunni Muslim rebels against members of Assad’s Alawite sect, an offshoot of Shiite Islam.

In the predominantly Alawite province of Latakia on the Mediterranean coast, the rebels captured 11 villages, edging closer to Assad’s ancestral home in the region, the village of Qardaha.

The opposition’s gains in Latakia, an Alawite stronghold that has been peaceful for much of the Syrian conflict, is a symbolic blow to the regime and a boost to the rebels.

But those gains have been overshadowed by reports from activists that more than 80 people were killed in two of the villages overrun by opposition fighters.

Syria’s crisis started as a largely peaceful uprising against Assad’s rule in March 2011 but turned into a civil war after opposition supporters took up arms to fight a brutal government crackdown. More than 100,000 people have been killed in the violence.