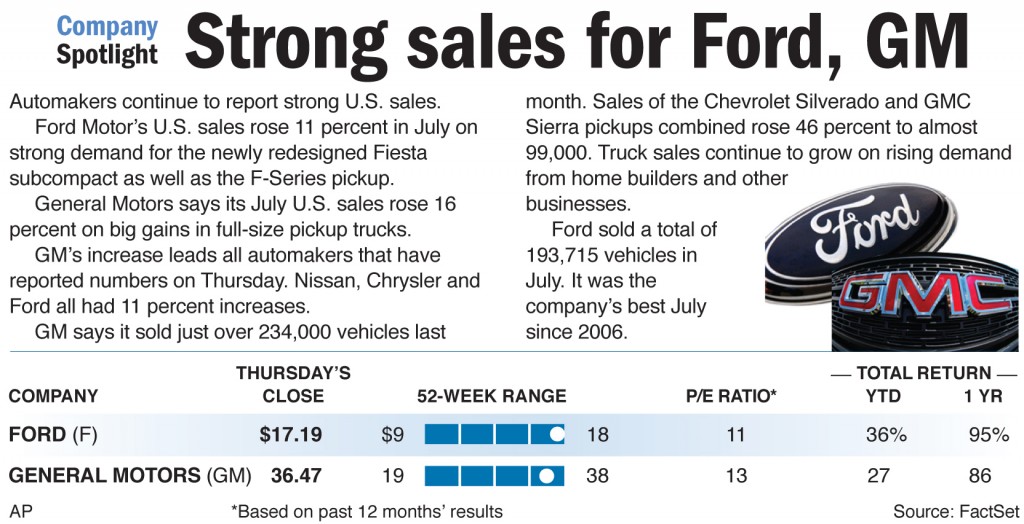 General Motors and Toyota led automakers reporting U.S. vehicle sales gains for July, as the most leasing in at least a decade paces the industry’s continued recovery.

GM deliveries rose 16 percent with all four of its brands reporting increases of more than 13 percent, while sales of cars and light trucks for Ford, Chrysler and Nissan all climbed 11 percent. Toyota sales rose more than 16.5 percent, the company said in an emailed statement that didn’t include final results.

High used-car prices, low interest rates and Americans’ tendency to buy vehicles based on the monthly payments are fueling more leasing in a U.S. market on track for its best year since 2007. Once primarily a tool for selling luxury vehicles, leases are becoming more common among hot-selling mid-size sedans, such as Ford’s Fusion and Honda’s Accord.

Analysts had predicted even bigger sales growth than automakers reported Thursday. GM trailed the average of nine analysts’ estimates for a 20 percent increase in a survey by Bloomberg News, which projected gains of 17 percent for Ford and 16 percent for Chrysler. Nissan missed the 13 percent average estimate of seven analysts.

U.S. car and light truck sales may have climbed 15 percent in July to 1.33 million, the average estimate of nine analysts in a survey by Bloomberg News. The annualized industry sales rate, adjusted for seasonal trends, probably accelerated to 15.8 million, the average of 15 estimates, from 14.1 million a year earlier.

GM forecast an industry sales rate in the range of 15.7 million for July, in an e-mailed statement from the Detroit-based company. Chrysler estimated a 15.8 million industry pace, including medium- and heavy-duty vehicles, which typically account for at least 200,000 deliveries per year.

Deliveries of the Chevrolet Impala surged 38 percent, to 12,915, in July. The automaker is winding down sales of the outgoing version of the model, amid rave reviews for the redesigned iteration.

The 2014 Impala was rated by Consumer Reports as the best sedan on the market — a first for a U.S. automaker in at least 20 years. It’s among a wave of new or refreshed models that will flip GM’s lineup from one of the stalest to one of the freshest.

Chrysler, majority-owned by Fiat, extended its streak of U.S. sales gains to 40 months, as it began building a Jeep sport-utility vehicle crucial to maintaining its momentum.

Chief executive officer Sergio Marchionne is introducing the new Jeep Cherokee SUV in 2013’s second half, to continue an expansion that’s been fueled this year by Ram trucks. Sales of the Ram pickup surged 31 percent in July, to 31,314.

“The second half is not doable without a proper launch of the Cherokee,” Marchionne said during a July 30 conference call after reporting an increased second-quarter profit. “It’s an absolute necessary condition for the achievement of the targets that we set for ourselves.”

The industry’s sales pace for the month keeps the U.S. on track for its best year since 16.1 million vehicles were sold in 2007. It’s also more proof of the diverging fortunes of the American auto industry and the city of Detroit, which filed the nation’s largest municipal bankruptcy in history last month.

Leasing’s share of U.S. new-vehicle sales has been at least 22.5 percent in every month this year, according to J.D. Power & Associates. The four top months for lease penetration in the last decade, the extent of Power’s data, were in 2013, and each of the year’s first six months rank among the top nine, the Westlake Village, Calif.-based researcher said.

GM said it outpaced the growth in leasing for the rest of the industry, which was up 2.5 percentage points to 24.3 percent of all sales.

Toyota is using $199-a-month leases on its Camry to keep it the top-selling car in the U.S., much as it did to recover from record recalls and Japan’s 2011 tsunami. Deliveries across the Toyota City, Japan-based company’s lineup probably rose 17 percent, the average of seven analysts’ estimates.

Competitors including Ford, Nissan and Honda are closing in on Camry, the top-selling car in the United States for the past 11 years. Ford is preparing a second Fusion production site in the third quarter, to boost output of its sedan that is gaining on the Camry.

Sales of the Fusion in July fell 12 percent to 20,522, Dearborn, Michigan-based Ford said on its website. Deliveries of F-Series pickups climbed 23 percent to 60,449.

A 20 percent surge in Honda’s Accord sales during the first half cut its deficit to Camry by 65 percent from a year earlier, to less than 21,000. Deliveries across their lineups probably rose 16 percent for Tokyo-based Honda and 13 percent for Nissan, each the average of seven estimates.

The Altima, one of seven models that Yokohama, Japan-based Nissan lowered prices on beginning in May, has trimmed its shortfall to Camry by 30 percent, to about 40,000. Ford had pared Camry’s lead on Fusion by 40 percent, to less than 47,000.

Combined U.S. sales of Volkswagen AG’s VW and Audi brands rose 0.3 percent to 48,843 in July, less than the 2.2 percent gain that was the average of four estimates. Deliveries for the VW brand slid 3.3 percent while Audi sales rose 12 percent, according to company statements.

Combined sales for Hyundai Motor Co. and its affiliate Kia Motors Corp. may have risen 3.4 percent in July, the average estimate of seven analysts. The Seoul-based carmakers have trailed industrywide sales growth in every month since September.