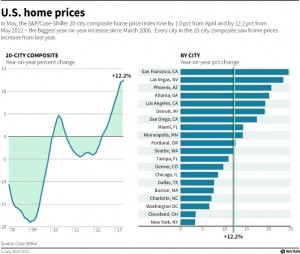 U.S. home prices jumped 12.2 percent in May compared with a year ago, the biggest annual gain since March 2006. The increase shows the housing recovery is strengthening.

The Standard & Poor’s/Case-Shiller 20-city home price index released Tuesday also surged 2.4 percent in May from April. The month-over-month gain nearly matched the 2.6 percent increase in April from March — the highest on record.

The price increases were widespread. All 20 cities showed gains in May from April and compared with a year ago.

Prices in Dallas and Denver reached the highest level on records dating back to 2000. That marks the first time since the housing bust that any city has reached an all-time high.

Home values are rising as more people are bidding on a scarce supply of houses for sale. Steady price increases, along with stable job gains and historically low mortgage rates, have in turn encouraged more Americans to buy homes.

One concern is that higher mortgage rates could slow home sales. But many economists say rates remain low by historical standards and would need to rise much faster to halt the momentum.

Svenja Gudell, senior economist at Zillow, a home price data provider, said a big reason for the recent price gains is that foreclosed homes make up a smaller proportion of overall sales. Foreclosed homes are usually sold by banks at fire-sale prices.

“Typical home values have appreciated at roughly half this pace for the past several months, which is still very robust,” Gudell said.

Gudell said higher mortgage rates and a likely increase in the number of homes for sale in the coming months should slow the pace of price gains and stabilize the housing market.

The index covers roughly half of U.S. homes. It measures prices compared with those in January 2000 and creates a three-month moving average. The May figures are the latest available. They are not adjusted for seasonal variations, so the monthly gains reflect more buying activity over the summer.

Despite the recent gains, home prices are still about 25 percent below the peaks they reached in July 2006. That’s a key reason the supply of homes for sale remains low, as many homeowners are waiting to recoup their losses before putting their houses on the market.

Dallas and Denver, the two cities that reached record highs, were not hit hard by the housing bust and therefore didn’t experience the sharp price swings like cities in Nevada, Arizona, California and Florida.

In Dallas, prices fell only 11.2 percent from their previous peak in June 2007 through February 2009. That’s far less than Las Vegas, where prices plummeted by more than half. Since bottoming out, home prices in Dallas have increased nearly 14 percent.

The biggest price gains are occurring in many of the states that experienced the worst housing bust.

Prices jumped 24.5 percent in San Francisco in May from a year earlier, the largest increase. Las Vegas reported the next-biggest gain at 23.3 percent, followed by Phoenix at 20.6 percent. All three remain well below their peak prices.

The smallest yearly gains were in New York, at 3.3 percent, followed by Cleveland with 3.4 percent and Washington, D.C. at 6.5 percent.

Higher home prices help the economy in several ways. They encourage more sellers to put their homes on the market, boosting supply and sustaining the housing recovery. And they make homeowners feel wealthier, encouraging consumers to spend more. Banks are also more willing to provide mortgage loans when homes are appreciating in value.

Mortgage rates have surged since early May, though the increase would have had little impact on the current report. The average rate on a 30-year fixed mortgage has jumped a full percentage point since early May and reached a two-year high of 4.51 percent in late June.

In recent weeks, Bernanke and other Fed members have stressed that any change in the bond-buying program will depend on the economy’s health, not a set calendar date.

Since those comments, interest rates have declined. The average on the 30-year mortgage was 4.31 percent last week.

The Fed begins a two-day policy meeting Tuesday, and could clarify its remarks further when the meeting concludes on Wednesday.

This article appeared in print in the July 31st, 2013 edition of Hamodia.