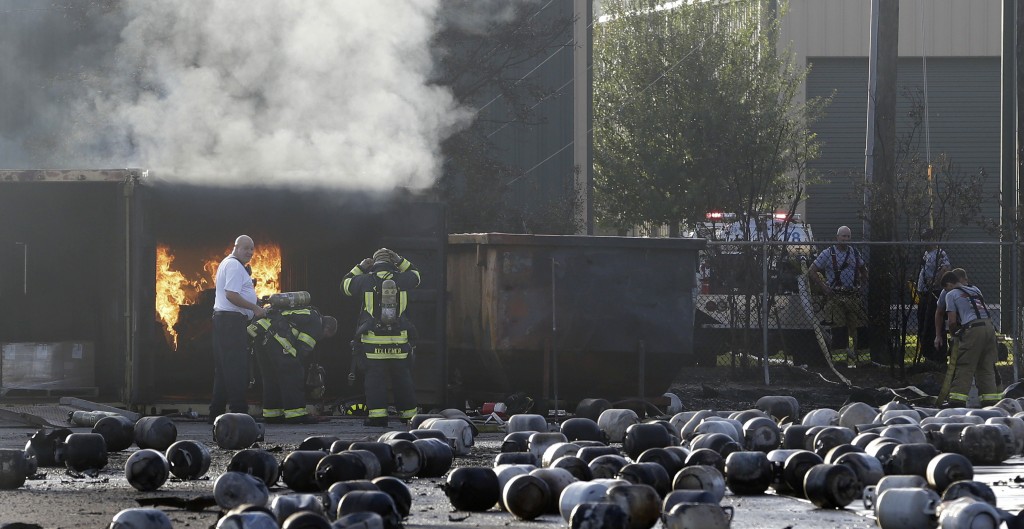 A large series of explosions rocked a gas plant in Lake County, Fla., late Monday, causing multiple casualties and forcing the evacuation of residents at least a mile away, authorities said.

About two dozen people were working the night shift at Blue Rhino, a propane-tank business. By 2 a.m. EDT Tuesday, all employees were accounted for, said Lt. John Herrell, a Sheriff’s Office spokesman.

There were no reports of fatalities, Herrell said.

Seven people were taken to hospitals, he said.

The first explosions began a little before 11 p.m. Monday at Blue Rhino on County Road 448 and lasted for more than half an hour. The blasts began again about 12:30 a.m. Tuesday in tractor-trailers loaded with pallets of propane tanks, Tavares Fire Chief Richard Keith said.

Herrell said the plant, as of Monday, had about 53,000 20-pound propane cylinders on site. There is “no indication whatsoever” how the fire or explosions started, he said.

“I heard loud boom sounds,” said Lisa Garner, 43, who lives in Lakeside, a Tavares subdivision near County Roads 461 and 448. “I thought somebody ran into my house.”

The first blasts happened inside the plant, blowing the roof off, Lake County Sheriff Gary Borders said. After the second round, Tavares Fire Chief Richard Keith pulled his firefighters out for fear that they would be injured.

When the second round of explosions began close to midnight, and the fire spread to another part of the plant, Herrell said, fire officials had to pull their crews back a bit.

The giant flames had subsided a bit by 1:00 a.m., when Herrell met with reporters about a mile from the plant.

“It’s a very dangerous scene,” Herrell said, adding that there were no reports of injuries among the first responders. “All I know in speaking with the fire chief is they have to proceed very cautiously.”

Family members of workers were encouraged to go to the Lake Tech Institute of Public Safety on Lane Park Cutoff in Tavares.

The sight of flames was reported more than five miles away. The vibrations could be felt as far away as Mount Dora.

Scores of people lined Lake Dora on Lakeshore Drive and gathered in a park in downtown Tavares to watch.

County Road 448 was closed for three or four miles east of the plant.

Blue Rhino relocated to Tavares about seven years ago, according to an April 2006 article in the Orlando Sentinel. Its headquarters is in North Carolina.