Regional In Fight for Hospital, de Blasio Gets Himself Arrested
Regional 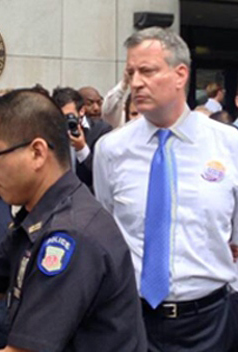 New York City Public Advocate Bill de Blasio was arrested Wednesday together with union members who endorsed his mayoral bid, as they were protesting the possible closure of a teaching hospital in Brooklyn two months before the progressive candidate stands in a tough Democratic primary.

De Blasio, along with others including Councilman Steve Levin, a Democrat representing Williamsburg, were outside the midtown Manhattan offices of the State University of New York, a cash strapped agency which is considering selling Long Island College Hospital.

The years-long feud came to a head with SUNY saying they want to sell the hospital to unknown buyers, reportedly for profit companies. They say that the hospital is losing millions of dollars a year. The protest was partly organized by a health care workers union that has endorsed de Blasio for mayor.

“Save our hospital!” several dozen protesters chanted as a SUNY official stood by. “No hospital, no peace!” they said as police closed in on them and began arrests.

Former Rep. Anthony Weiner and Comptroller John Liu — both mayoral candidates — were at the protest but did not get arrested. De Blasio and Levin were handcuffed, brought to the local precinct in a police van, and cited on a disorderly conduct charge.

“The police were very respectful” while making the arrests, de Blasio said. He was released by 1:30 p.m. and returned to the campaign trail immediately. His campaign released video and photos of the arrest to their media list.

De Blasio has urged Gov. Andrew Cuomo to intervene on the side of keeping the hospital open.

“It’s not about my campaign. It’s about saving hospitals,” he said after he emerged from the police precinct where he and others were given a summons for an Aug. 20 court appearance. “And it’s time to save these hospitals.”

While de Blasio’s mayoral campaign has been talking about the pending hospital closure for weeks, his first official statement as public advocate came shortly after his arrest.

“We are going to lose a vital community hospital in a matter of weeks unless something changes,” he said. The governor must act to save LICH, and SUNY Downstate must stop its end run around a judge’s direct order and commit to keeping this hospital up and running.”

The Long Island College Hospital is one of few serving the northern Brooklyn neighborhood where the de Blasios live. While a percentage of the Orthodox community in Williamsburg used to go there for births, activist Isaac Sofer told Hamodia, recent hardships have forced them to go elsewhere for anything other than emergencies.

Some of his mayoral opponents and many political pundits accused de Blasio of seeking publicity by getting arrested.

“I heard you’re going to get cuffed today,” Liu told de Blasio during the protest; the public advocate smiled but did not say anything.

As police were cuffing de Blasio, a bystander yelled, “Yeah, Bill, you’ve got my vote,” according to Politicker.

“Today, Bill [went over the top],” said former Councilman Sal Albanese, a mayoral candidate stuck in the single digits. “Desperate for headlines, he got himself arrested … The nurses, doctors, and community members who have devoted their lives to saving healthcare in their neighborhoods will now be treated by the press as footnotes to a political charade.”

De Blasio has been arrested four times previously, including at a protest over the closing of a Brooklyn firehouse in 2003, when he was a city councilman.