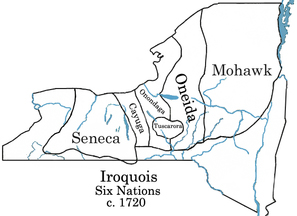 The 400th anniversary of an agreement between the Iroquois and Dutch settlers in upstate New York is kicking off with a paddling expedition to Albany and New York City.

Members of the Onondaga Nation and others are launching the first leg of a trip that will carry a replica of the Two Row Wampum agreement to the state capital on July 14 and the United Nations later this month.

The paddlers will begin at the Onondaga Creek south of Syracuse on Tuesday and there will be a festival celebrating the anniversary at Onondaga Lake Park. In 1613, the Iroquois recorded the agreement with a belt of shell beads in parallel strips representing the Dutch ships and their canoes traveling the same path.