Gang of Fierce Asian Mosquitoes Zeroes in on NJ 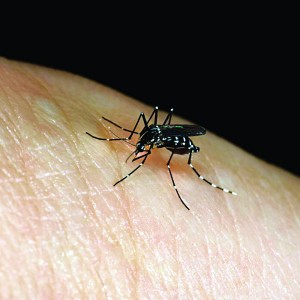 The dire warnings of swarms of cicadas are beginning to fade, but New Jerseyans better be prepared to welcome a new scourge in town. It’s the Asian tiger mosquito, an elegant little bug that looks like it’s dressed for an evening out, but will eat you alive even at midday.

Other mosquitoes are predictable. They came out at dusk, sucked your blood for a while, made it impossible to get to sleep with their infernal whine, and sometimes gave you a fleeting moment of intense, murderous pleasure when you squished one in mid-bite — and then generally left you alone until the next evening.

The Asian tiger mosquito, named for its distinctive black-and-white striped legs and body markings, has no compunction about attacking when you least expect it, zooming in for a meal as you get into the car for your morning commute, for example.

The mosquito was first discovered in Monmouth County in 1995 and has spread far to the north since then. It is a major nuisance in Bergen and Passaic counties, and is an insect that feeds primarily on birds and is known to spread disease, such as West Nile virus, among its hosts.

Pete Rendine, chief inspector with the mosquito control division of the Bergen County Public Works Department, said Asian tiger mosquitoes “are the worst, nuisance-wise, because they are adapting to our climate. They are here to stay.”

Among the 63 different species of mosquito known to exist in New Jersey, relatively few have risen into the ranks of extreme nuisance as has the Asian tiger. Many breed in remote woodland areas and have very short ranges. One has a decided preference for frogs. One survives exclusively on flower nectar. Another, known as the cannibal, eats the larvae of other mosquitoes and grows into an adult that lives on flowers.

“The thing is, if homeowners would only clean up their property we would not even have an albopictus problem,” Rendine said, referring to its scientific name.

“This is how you kill them,” Rendine said, spilling a cup of water and wrigglers onto the ground. “That’s it. That’s all there is to it. Without water, they die.”

This article appeared in print on page 4 of the June 25th, 2013 edition of Hamodia.