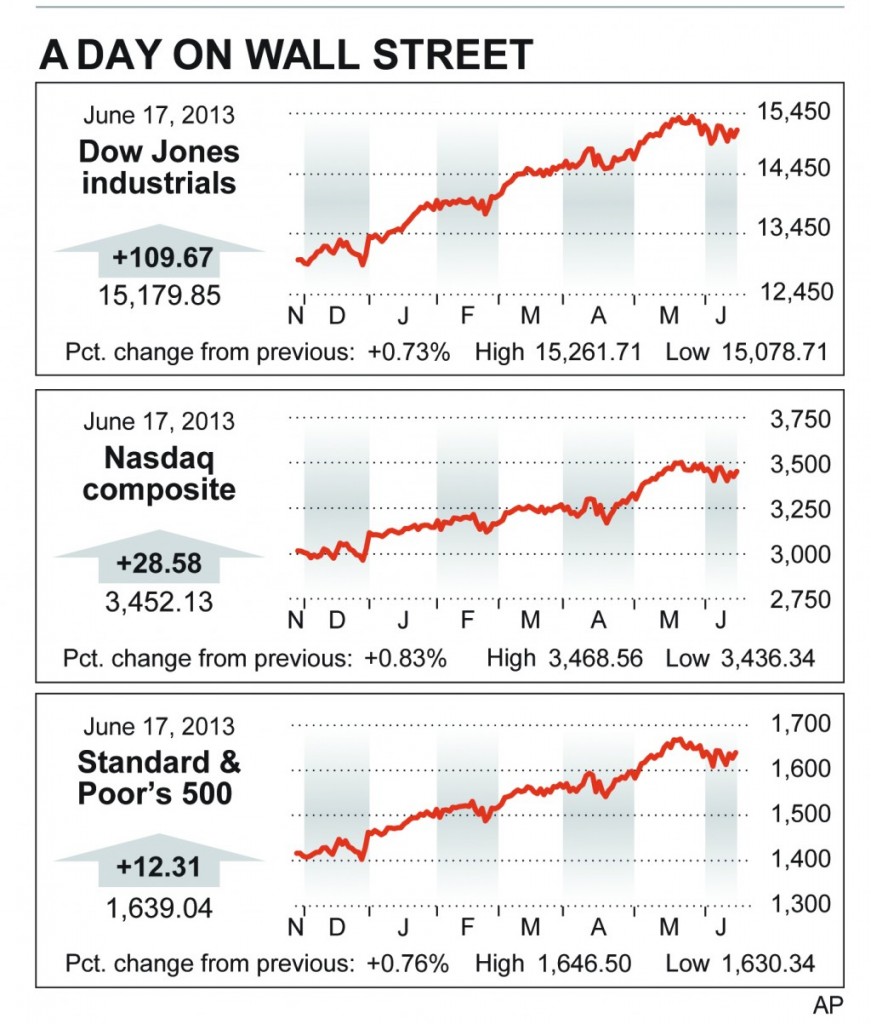 Investors on Wall Street are playing a guessing game with the Federal Reserve.

On Monday, they guessed that the central bank will continue trying to prop up the economy and sent stocks higher.

The major stock indexes all rose about 1 percent in early trading and stayed there for most of the day, before dipping slightly in the afternoon. The Standard & Poor’s 500 index rose 12.31 points, or 0.8 percent, to 1,639.04. It had been up as much as 20 points.

The market’s gains were broad. Telecommunications was the only one of the 10 industry sectors in the S&P 500 to post a loss. Netflix did better than any other stock in the S&P 500.

Overall, though, there were few big company announcements or economic reports. Trading was light, the day more a holding pattern than a referendum. Investors will have to keep guessing about the Fed’s future actions until Wednesday, when it will release a policy statement shortly after midday.

Investors sent stocks up Monday because they think Fed policymakers will determine that the economy isn’t recovering fast enough. That might seem like a contradiction, but a still-weak economy would influence the Fed to continue its programs designed to stimulate the economy: keeping interest rates low to encourage borrowing, and buying bonds to push investors into stocks.

Not everyone thinks that’s a logical pattern.

Doug Lockwood, branch president of Hefty Wealth Partners, a financial advisory firm in Auburn, Ind., said it’s not rational for the stock market to regard bad news as good, and to be yanked back and forth more by the actions of a central bank than the underlying fundamentals of the economy.

The market has been in flux since May 22, when Fed Chairman Ben Bernanke said the Fed would consider pulling back on its bond-buying program if measures of the economy, especially hiring, improve. The comment, made not in prepared testimony but in response to a question from the Joint Economic Committee in Congress, was not expected. In the 17 trading days since then, the Dow Jones industrial average has swung by triple digits 11 times. Overall, the Dow is down about 1 percent since before Bernanke’s testimony.

Earlier this month, the government reported that the U.S. added 175,000 jobs in May — a solid addition, but not enough to cut into the unemployment rate. And on Friday, the government said that a key measure of inflation — the producer price index, which measures wholesale prices — rose just 0.1 percent after stripping out the volatile costs of food and gas. That’s important because the Fed knows that its stimulus measures can stoke inflation; if inflation is low, that gives the central bank more flexibility to keep pumping money into the economy.

Two measures of economic data released Monday were positive, though both are considered less-important gauges of the U.S. economy. A report on New York state manufacturing showed a pickup, and a survey of U.S. homebuilders said they were more optimistic about home sales than they have been in seven years.

Japan, trying to spur its own economy with a central bank bond-buying program, saw its benchmark Nikkei 225 index jump nearly 3 percent, extending Friday’s gain of about 2 percent. Japan’s market has also been ricocheted by investors trying to guess the future of its central bank’s stimulus actions. Monday’s gains were driven by a drop in the value of the yen, which makes Japan’s exports cheaper and more competitive. The Nikkei is still down 15 percent since the day before Bernanke’s testimony.