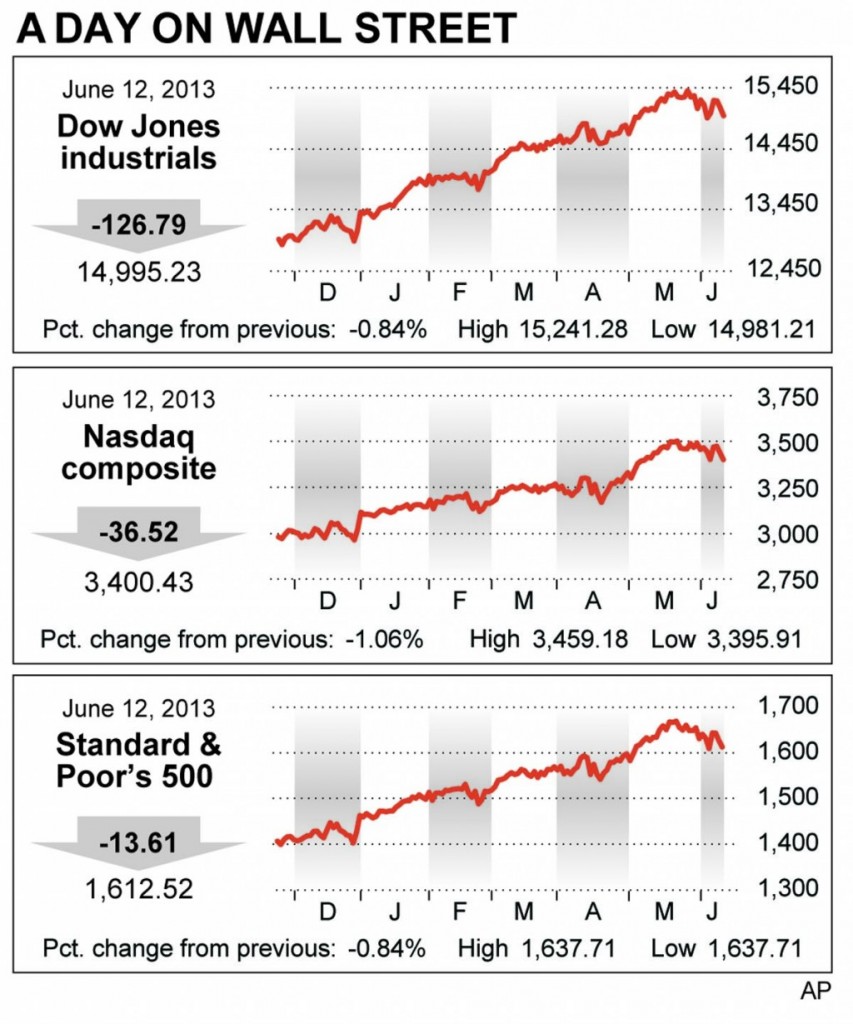 The stock market ended lower Wednesday as traders looked ahead to a critical Federal Reserve meeting next week.

Without any major economic news, traders grappled with the question hanging over financial markets: When will the Fed and other central banks pull back their economic stimulus programs?

“There’s nothing concrete out there to turn us around today,” Russell Croft, co-portfolio manager at the Croft Value Fund in Baltimore. “So naturally enough, people are back to thinking about the Fed.”

The Dow was up as much as 119 points in the first few minutes of trading, then drifted lower throughout the day.

Markets have turned turbulent in recent weeks as traders start preparing for a time when central banks around the world aren’t pumping as much money into the financial system.

The S&P 500 has lost 3.4 percent since reaching a record high on May 21. The next day, Fed chairman Ben Bernanke said the central bank could decide to scale down its bond-buying program in the coming months if the economy looks strong enough.

Since then, the discussion among investors has centered on what will happen when the Fed shifts course. “‘Tapering’ is definitely the word of the month,” Croft said.

Many on Wall Street think the Fed could signal that it’s ready to start cutting back on its $85 billion in bond purchases at the end of its two-day meeting next Wednesday. That’s a key reason bond traders have been selling Treasurys, sending the 10-year yield from a low of 1.63 percent last month to as high as 2.29 percent this week.

Long-term borrowing rates are still near historic lows, but their jump over the past month has grabbed investors’ attention, said Mark Travis, president and CEO of Intrepid Capital Management. “I think people are starting to pause,” he said. “If rates continue to drift up, it’s probably going to be a headwind for the market.”

Despite the losses, there were a few bright spots.

Cooper Tire & Rubber jumped 41 percent after Apollo Tyres, an Indian company, announced plans to buy the tire maker for $2.5 billion. The combined company would be one of the world’s largest tire makers, Apollo said, with combined 2012 sales of $6.6 billion. Cooper Tire gained $10.10 to $34.66.

Gigamon soared 50 percent on its first day of trading as a public company. The Milpitas, Calif.-based company, which makes equipment for computer-network traffic, raised $128 million in its initial public offering Tuesday. Its stock surged $9.47 to $28.47.

In the market for U.S. government bonds, the yield on the 10-year Treasury note edged up to 2.23 percent from 2.18 percent late Tuesday.

Among other stocks making moves: