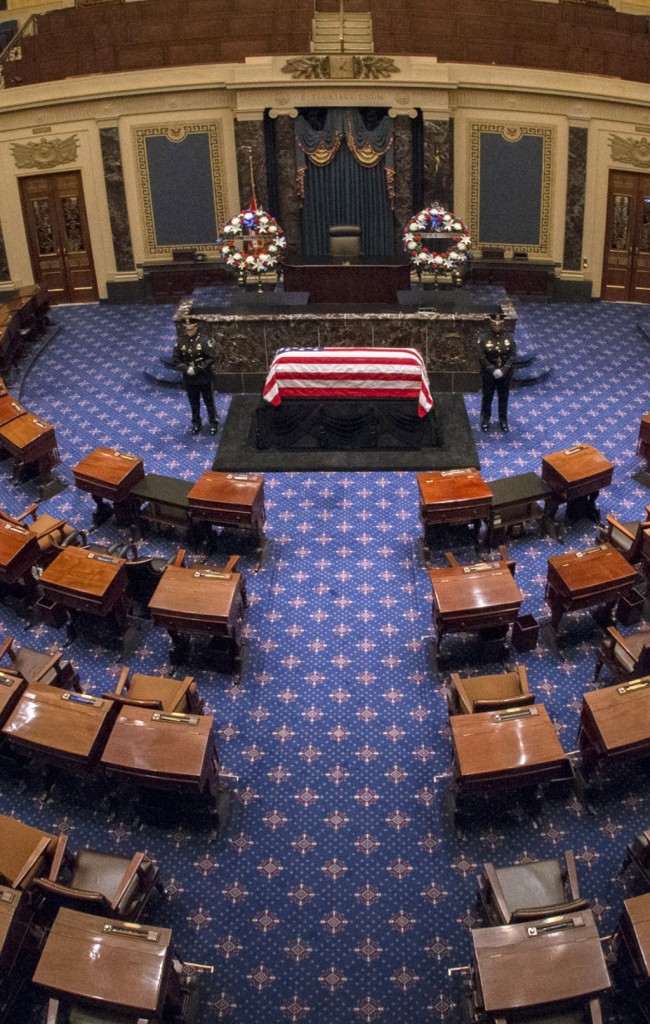 Frank Lautenberg was remembered  on Thursday by Senate colleagues for his leadership and laughter during nearly three decades serving in the chamber.

The liberal Democrat from New Jersey was the Senate’s oldest member and the last World War II veteran to serve there. He died Monday at the age of 89 after suffering complications from viral pneumonia.

A long line of lawmakers, ex-lawmakers and other dignitaries, including Treasury Secretary Jacob Lew, paid their final respects to Lautenberg as his flag-draped casket rested atop the Lincoln Catafalque, a bier built for the coffin of President Abraham Lincoln.

“Sen. Lautenberg was one of the most effective and productive senators ever to serve in this body,” Senate Majority Leader Harry Reid (D-Nev.) said. “His leadership, as well as his laughter and kindness, will be missed.”

Lautenberg will be buried Friday morning at Arlington National Cemetery.

A nine-member military color guard carried Lautenberg’s casket up the Capitol steps to the Senate chamber as members of Lautenberg’s family and congressional staffers looked on.

Lautenberg was never among the Senate’s most electrifying speakers, but he made a mark as a staunch advocate of gun control and a frequent critic of the tobacco industry.

“He was fun, he was tenacious,” said Sen. Barbara Mikulski (D-Md.). “He took on big interests for little people.”

Sen. Chuck Schumer (D-N.Y.) said Lautenberg only had about four jokes that he told over and over again but that his laughter was contagious.

“No matter how many times you heard them, he laughed so hard that you laughed,” Schumer said. “It was like seeing a good movie 10 times.”

“He was interested in saving lives. What higher tribute can you pay to somebody?” said Schumer.