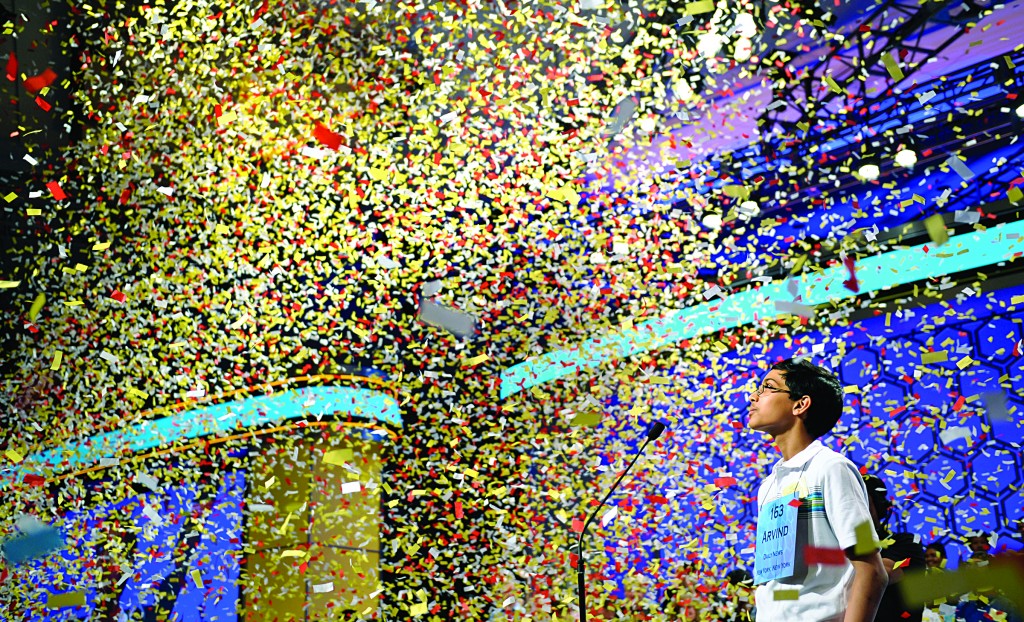 As red and yellow confetti floated into his hair, the champ just stood there and cracked his knuckles, hardly the type of celebration expected from a 13-year-old. His smiles had come earlier, when he won spelling’s top prize.

New York City has its first Scripps National Spelling Bee winner in 16 years. Arvind Mahankali has never had a “knaidel,” but he was able to spell the German-derived Yiddish word for a matzah ball Thursday night to earn the huge trophy and more than $30,000 in cash and prizes.

Arvind finished third the two previous years, eliminated both times on German words. He had everyone laughing two years ago when he pronounced “Jugendstil” as “You could steal” and saluted the crowd when he got it wrong. Last year he flubbed “schwannoma” and quickly proclaimed: “I know what I have to study.”

“I had begun to be a little wary of German words,” Arvind said Thursday night. “But this year I prepared German words and I studied them, so when I got German words this year, I wasn’t worried.”

When Arvind got the word “dehnstufe” earlier in the finals, the audience groaned. Milking the moment, he asked, “Can I have the language of origin?” before throwing his hands in the air with a wry smile when the answer came back “German.” He then spelled the word — which means an Indo-European long-grade vowel — without a hitch.

But after showing all that personality on stage, why didn’t he have a reaction when he finally won — beyond his familiar knuckle-cracking habit?

Arvind, looking a bit overwhelmed, explained it this way: “I actually do not have a proper recollection of what I did these past few hours.”

Arvind admires Albert Einstein and hopes to become a physicist. He’s the first boy to win the bee since 2008, and the first champion from the Big Apple since Rebecca Sealfon in 1997. He’s also the bee’s sixth consecutive Indian-American winner and the 11th in the past 15 years, a run that began when Nupur Lala captured the title in 1999.

Arvind’s father is an IT consultant and his mother is a doctor. The family is originally from Hyderabad in southern India, where relatives were watching live as the event was broadcast from a suburban Washington hotel. His father cited a premium on education and language as reasons for the spate of Indian-American winners.

“At home, my dad used to chant Telegu poems from forward to backward and backward to forward, that kind of thing,” Srinivas Mahankali said. “So language affinity — we value language a lot. And I love language, I love English.”

The last three finalists were Indian-American, including 13-year-old Pranav Sivakumar from Tower Lakes, Ill., who was tripped up by “cyanophycean” and finished second. Sriram Hathwar, 13, of Painted Post, N.Y., placed third.

The week began with 281 spellers and was whittled down to 42 for the semifinals Thursday afternoon and 11 for the prime-time finals, with spellers advancing based on a formula that combined their scores from computerized spelling and vocabulary tests with their performance in onstage rounds.