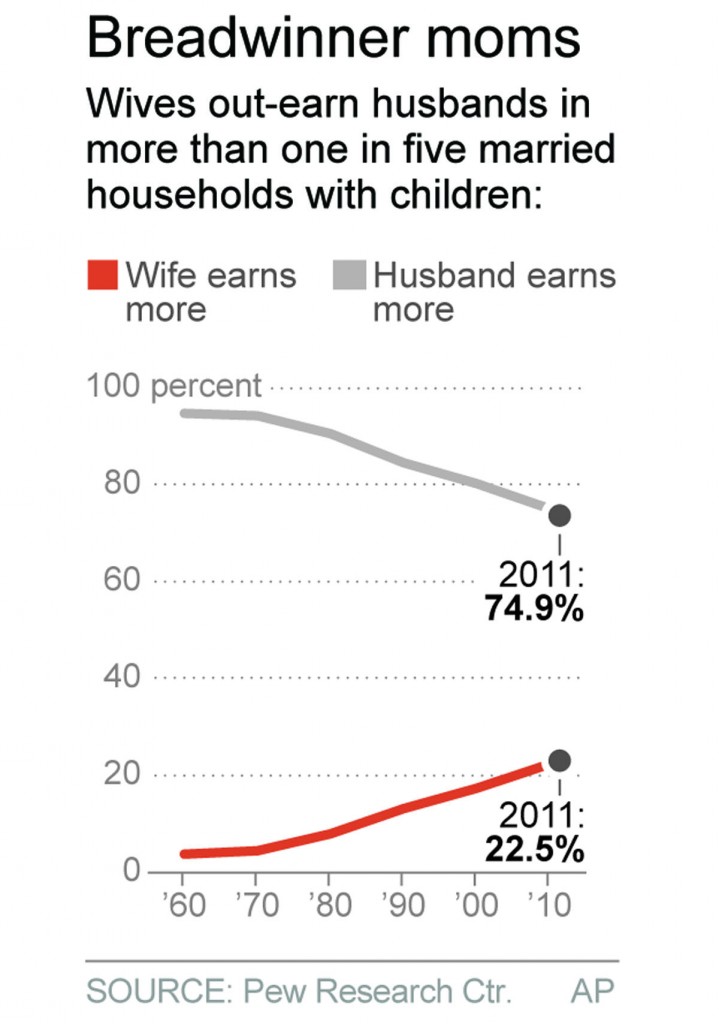 Mothers are breadwinners for a record share of American families, as more women bring up children on their own and more married mothers outearn their husbands, an analysis of census data shows.

The new reality is a dramatic shift from decades ago, the Pew Research Center found in a study released Wednesday. Two years ago, more than 40 percent of American households with children relied on a mother as their biggest or only source of income – a massive jump from 11 percent of families in 1960.

Two factors drove the change: Single mothers now make up a quarter of all U.S. households with children, the Pew analysis of U.S. Census Bureau data found. On top of that, a growing share of married mothers make more money than their husbands, as more women earn degrees and enter the workforce. Wives earn more in nearly one out of four married couples, Pew found.

“I always thought I’d be working – not just for the financial implications, but because I love what I do,” said Karen Potter, a Dana Point, Calif. mother who works as an endodontist and is married to a lawyer. When her baby daughter grows up, “I hope and pray that she knows you can be there for your children and have a career that you’re passionate about.”

Yet even as more American families rely on working mothers, Pew found that many people remain uneasy about moms at work. Nearly three out of four adults surveyed said the growing number of working mothers made it harder for families to raise children. About half said children were better off with their mothers at home, while only 8 percent said the same about fathers.

Those worries persist even though Americans are mindful of the economic benefits for families when moms head to work – and despite the fact that the vast majority of Americans don’t think women should return to “traditional roles,” Pew discovered.

“Maybe in the future, this will just be the norm and it won’t be unusual to anybody,” said Kim Parker, associate director of the Pew Social and Demographic Trends project. “But now, the public is still working through a lot of this stuff.”

Families who don’t fit the traditional mold see those misgivings firsthand. Fathers still outearn mothers in most married families, despite the rise in female breadwinners. Stay-at-home dads, still a small fraction of fathers, are met with surprise and sometimes even suspicion.

When an Ohio preschool called for parent volunteers, “it was called the ‘Mommy Helper Day,'” said Jenna Huff, an Akron physician whose husband is a stay-at-home dad. “My husband was obviously not the mommy – but he was the helper.”

Eleanor Sayre, a Kansas State University physics professor, said elementary school staffers almost always called her to check when her daughter was absent, even though her husband is listed as the emergency contact.