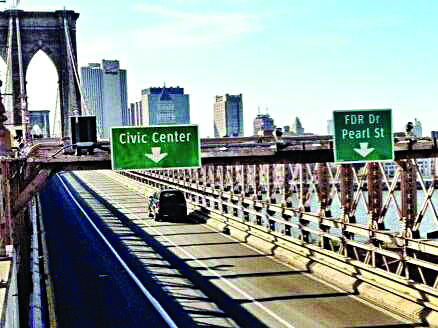 An abandoned SUV on the Brooklyn Bridge brought traffic to a halt for about an hour at the tail end of the Memorial Day long weekend as New York City police temporarily shut down the roadway to determine if the vehicle was a threat.

Authorities said a call about the car, a Dodge Durango with no license plates on the Manhattan-bound lanes, came in around 5:15 p.m. Monday. The vehicle was stopped a short distance into the bridge’s span coming from the Brooklyn side of the East River.

Police shut down traffic in both directions around 6 p.m., causing a traffic headache as drivers were forced to find alternate routes. Authorities declared the all-clear around 7 p.m., with traffic resuming soon after.

The New York Police Department’s bomb squad and other investigators headed to the area to check out the car. Footage showed police trucks stationed on the empty span near the blue SUV as traffic backed up on nearby roadways.

The bridge has been closed before because of suspicious packages.

In October 2010, the bridge was shut down for less than an hour over a report of a suspicious package and in June 2009, three empty black suitcases on the bridge shut it down for an hour.