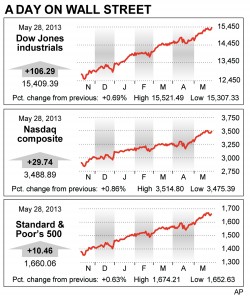 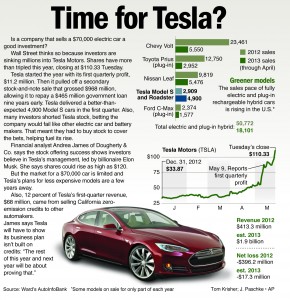 A rally that brought the stock market to record highs this year came back to life after U.S. home prices rose the most in seven years and consumer confidence reached a five-year high. As stock prices rose, investors sold bonds, sending interest rates higher.

The Dow Jones industrial average rose 106 points to close at another record Tuesday, bouncing back from a loss the week before. The Standard & Poor’s 500 index also gained. The S&P is on track for its seventh straight monthly gain, the longest winning streak since 2009.

The yield on the 10-year Treasury note jumped to 2.17 percent, its highest level since April 2012, as investors moved money out of safe assets and into riskier ones like stocks. That’s a big jump from Friday’s level of 2.01 percent. Markets were closed Monday for Memorial Day.

The stock market is coming off a rare loss last week, when both the Dow and the S&P 500 index had their first losing weeks in a month. Investors worried that the Federal Reserve might slow its extraordinary economic stimulus measures, which have also supported the stock market’s advance.

Part of the reason for the increase in bond yields is anticipation that the Fed may ease back on its $85 billion a month in bond purchases. Tim Courtney, chief investment officer at Exencial Wealth Advisors, is among those who see a bleak outlook for the bond market. Rising inflation will eventually lead to higher interest rates, Courtney said, and losses for bond investors.

“The only way that bonds can make money from here is if we go a prolonged period of time with very, very low inflation and rates just don’t move up a whole lot at all,” said Courtney. “Under any other scenario they lose.”

The Standard & Poor’s/Case-Shiller survey, which was released before stock trading opened, found that U.S. home prices rose 10.9 percent in March, the most since April 2006. A growing number of buyers are bidding on a tight supply of homes. Beazer Homes jumped 63 cents, or 3 percent, to $21.96.

Stocks extended their gains in the morning after the Conference Board reported at 10 a.m. that its measure of consumer confidence rose in May to its highest level since February 2008.

The Dow was up as much as 218 in the early going, then gave up some of its gain in the afternoon.

The Dow closed 106.29 points, or 0.7 percent higher, at 15,409.39. The index has risen for 20 straight Tuesdays. The longest streak of consecutive gains for any day of the week was sent in 1968, when there were 24 gains on Wednesdays, according to Schaeffer’s Investment Research.

The gains were broad. Eight of the 10 industry groups in the S&P 500 index rose, led by financial stocks. The only ones that fell were utilities and telecommunication stocks, which investors tend to buy when they’re seeking stable, safe stocks that pay high dividends. All but six of the 30 stocks in the Dow rose.

The Dow has advanced 17.6 percent this year and the S&P 500 index is 16.4 percent higher as investors have piled into stocks.

Unlike the first three months of the year, when the biggest gains were in large, stable companies like consumer staple makers that pay big dividends, in recent weeks investors have been bidding up the stocks of companies that have more to gain if the economy strengths. That shift out of lower-risk stocks and into more “cyclical” stocks, like banks and industrial companies, means investors are becoming more aggressive in seeking returns and more comfortable taking on risk.

Another bullish signal for the market is the strong growth in small-company stocks. Those stocks have a greater potential for appreciation but also tend to carry greater risk than large, diversified companies. The preference for small stocks was on display again Tuesday as the Russell 2000 index of small-company stocks rose 1.3 percent, more than other market indexes, to 997 points, a gain of 13 points. Its year-to-date increase of 17.4 percent is 1 percentage point greater than that of the S&P 500.