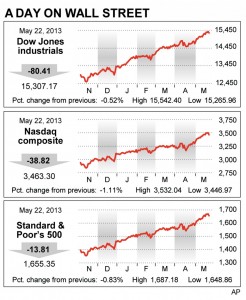 The Federal Reserve took financial markets for a ride Wednesday, pushing stock prices up in the morning then sending them down in afternoon.

Prices surged on congressional testimony by Fed chairman Ben Bernanke early in the day that suggested the central bank would not end its massive economic stimulus program any time soon. But then minutes of a Fed meeting were released suggesting the stimulus could be scaled back as early as next month if the economy picks up, and stocks began dropping fast.

The yield on the benchmark 10-year Treasury note rose above 2 percent for the first time since March 14, to 2.03 percent from 1.93 percent the day before.

The Fed is buying $85 billion worth of bonds every month as part of its stimulus program. That has kept interest rates low and encouraged investors to put money into stocks and other riskier assets instead of bonds. If the Fed slows down its bond purchases, investors fear, it could lead to an outpouring of money from the stock market and back into bonds.

The Dow Jones industrial average ended the day down 80.41 points, or 0.5 percent, to 15,307.17. Earlier, the index had risen as much as 154 points after Bernanke started speaking to lawmakers.

“If you had any doubts about the influence of the Fed, you only have to look at the roller coaster that followed Bernanke’s testimony this morning and the release to Fed minutes this afternoon,” said David Kelly, chief global strategist at J.P. Morgan Funds.

The minutes of the April 30-May 1 meeting showed that “a number” of members expressed a willingness to scale back the Fed’s bond purchases, perhaps as soon as June, if the economy accelerates. The Fed next meets June 18-19.

Earlier in the day, Bernanke had told lawmakers it was too soon for the central bank to pull back on its stimulus programs. Investors were also encouraged by news that sales of previously occupied U.S. homes rose last month to the highest level in three and a half years.

“It’s up, up and away,” said Stephen Carl, head of stock trading at the Williams Capital Group, as stocks were soaring shortly after Bernanke stopped speaking.

In addition to buying bonds, the Fed has been keeping short-term interest rates near zero to encourage people and businesses to borrow and spend more.

In addition to stimulus from the Fed, other factors have been pushing the stock market higher, including a rebounding housing market, a pickup in hiring and strong earnings at big U.S. companies. On Wednesday, S&P Capital IQ reported that earnings in S&P 500 companies had reached a quarterly record.

Investors don’t like when the Fed pulls back from stimulus policies and raised interest rates because it typically has slowed the economy, and has even led to recessions. But JPMorgan’s Kelly notes that when interest rates are very low like now, history suggests interest rates hikes won’t hurt the stock market that much because it means the economy is getting stronger.

“I don’t think that [higher] interest rates will prove bad for the stock market,” he said. “But the stock market has been hypnotized into believing that the only thing keep it afloat is the Fed.”

On Tuesday, stocks rose after James Bullard, president of the St. Louis branch of the Federal Reserve, told an audience in Germany that the central bank should continue buying bonds.