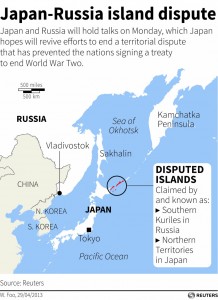 Russia and Japan said on Monday they would revive talks on resolving a territorial dispute that has prevented them signing a treaty formally ending their World War II hostilities, and, wary of Chinaâ€™s rising influence, agreed to bolster trade ties.

At the two G8 powersâ€™ first Moscow summit for 10 years, President Vladimir Putin and Prime Minister Shinzo Abe had Chinaâ€™s economic and political might in mind as they launched a new effort to warm up their relationship.

An end to the dispute over four Pacific islands is not in sight, but reviving long-stalled talks is a first step to improving economic cooperation, which both sides say has failed to live up to its potential.

â€śWe have agreed to revive talks [on the islands],â€ť Putin told a news conference with Abe after a Kremlin ceremony at which about 20 economic cooperation agreements were signed, but said this did not mean the issue would be resolved â€śtomorrowâ€ť.

Abe acknowledged the sides were far apart over the islands but hailed the decision to instruct foreign ministers to resume talks as an important move to end an â€śabnormalâ€ť situation.

Looking relaxed in talks with Putin in an ornate Kremlin hall, Abe said bilateral trade had grown eightfold in the 10 years since then-Prime Minister Junichiro Koizumi held a summit with Putin in Moscow.

â€śNevertheless, our potential for cooperation has not been opened wide enough,â€ť Abe said.

Underlining this, the sides failed to clinch any major deals on energy cooperation.

But Abe said closer ties and more trade would â€śalso make a contribution to the stability and prosperity of our region and the world as a whole.â€ť

This article appeared in print on page 3 of the April 30th, 2013 edition of Hamodia.

Click â€śRenew Subscriptionâ€ť below to begin the process of renewing your subscription.

Enter your email address, and weâ€™ll send you a password reset link.