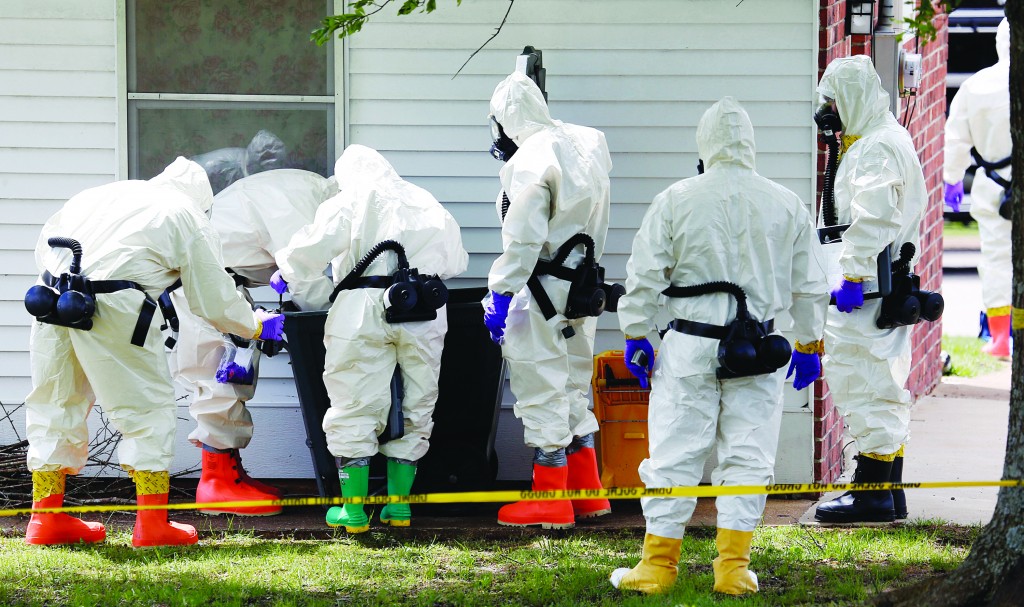 Charges were dropped Tuesday against the man accused of sending ricin-laced letters to President Barack Obama and others, while authorities searched at another man’s home in connection with the case.

The surprising move was announced in a brief document filed in federal court in the state of Mississippi, hours after Paul Kevin Curtis was released from custody. The charges were dismissed without prejudice, which  means they could be re-instated if prosecutors so choose.

Attorneys for Curtis have suggested he was framed, and an FBI agent testified in court this week that no evidence of ricin was found in searches of his home. At a news conference Tuesday, they declined to discuss whether they were told what new information the government had uncovered.

In Tupelo, numerous law enforcement officers converged on the home of another Mississippi man, including some in hazmat suits.

Everett Dutschke said in a phone interview with The Associated Press that the FBI was at his Tupelo home Tuesday for the search connected to the mailing of poisoned letters to Obama, Republican Senator Roger Wicker and a state judge. Dutschke said his house was also searched last week.

Dutschke has maintained his innocence and says he doesn’t know anything about the ingredients for ricin. He said agents asked him about Curtis, whether Dutschke would take a lie detector test and if he had ever bought castor beans, which can be used to make the potent poison.

“I’m a patriotic American. I don’t have any grudges against anybody. I did not send the letters,” said Dutschke, who hasn’t been arrested or charged.

The day’s events began when the third day of a preliminary and detention hearing was cancelled without officials explaining the change. Within two hours, Curtis had been released, though it wasn’t clear why at first. A lawyer later said he was released on bond.

Through his lawyers, Curtis has denied involvement in the letters.

“The searches are concluded, not one single shred of evidence was found to indicate Kevin could have done this,” Defense lawyer Christi McCoy told reporters after a hearing Monday.

McCoy said in court that someone may have framed Curtis. She questioned why Curtis would have signed the letters “I am KC and I approve this message,” a phrase he had used online.

FBI Agent Brandon Grant said in court on Monday that searches last week of Curtis’ vehicle and house in Corinth, Mississippi, found no ricin, ingredients for the poison, or devices used to make it. A search of Curtis’ computers found no evidence he researched making ricin. Authorities produced no other physical evidence at the hearings tying Curtis to the letters.

Curtis was arrested last Wednesday at his house in Corinth, Mississippi. The first of the letters was found two days earlier.

Grant testified Friday that authorities tried to track down the sender of the letters by using a list of Wicker’s constituents with the initials KC, the same initials in the letters. Grant said the list was whittled from thousands to about 100 when investigators isolated the ones who lived in an area that would have a Memphis, Tennessee, postmark, which includes many places in north Mississippi. He said Wicker’s staff recognized Curtis as someone who had written the senator before.

On Tuesday, people in hazmat suits were seen going in and out of Dutschke’s house on a quiet block in Tupelo. Investigators from the FBI, U.S. Marshals Service and U.S. Capitol Police were seen outside the house.

Dutschke said his attorney wasn’t with him and he didn’t know whether he was going to be arrested.

Dutschke said that he knows Curtis but that the two had a falling out. Dutschke said the last contact they had was in 2010 when Dutschke threatened to sue Curtis for saying he was a member of Mensa, a group for people with high IQs.