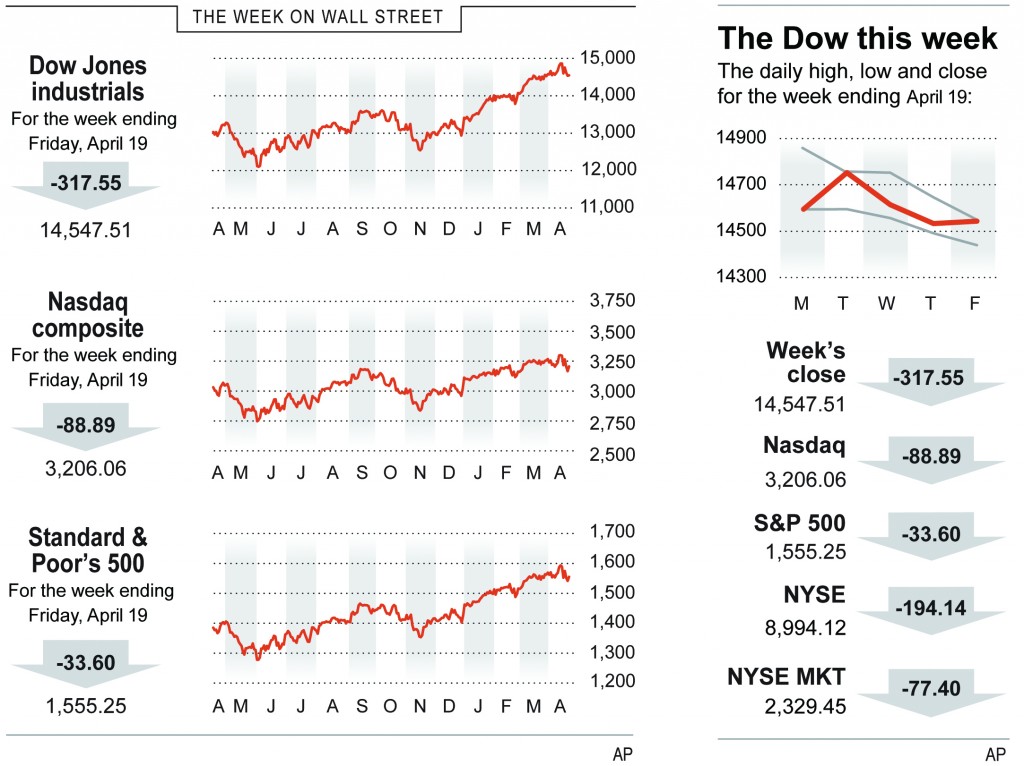 Strong earnings for a pair of technology giants helped the stock market recover some of its losses Friday, a positive end to Wall Street’s worst week in five months.

Google’s stock climbed 3 percent to $799.87. The leader in internet search boosted prices for ads distributed to smartphones and tablet computers.

Traders, like everyone else, were following the news out of Boston, where police were hunting for one of two brothers suspected to be behind Monday’s Boston Marathon bombings. One brother was killed in a gun battle with police overnight. But the news had no impact on markets, traders said.

Friday’s slight gains couldn’t overcome a tough week for the market, when both the S&P 500 and the Dow lost 2.1 percent. That’s their biggest weekly drop since last November.

“Compared to the rest of the week, it looks like we’re going to slide into the weekend on a quiet note,” said Jim Baird, partner and chief investment officer for Plante Moran Financial Advisors.

By many measures, the financial markets have endured a rough five days. News that economic growth had slowed in China set off a plunge in commodity prices on Monday, leading the stock market to its worst day of the year. Gold dropped below $1,400 an ounce for the first time in two years.

The stock market bounced back the next day, then fell again on Wednesday, its third-worst day this year.

Most big corporations have managed to beat analysts’ low expectations for first-quarter profits. Of the 104 companies that turned in results through Friday morning, 70 have trumped forecasts, according to S&P Capital IQ.

Analysts estimate that earnings for companies in the S&P 500 inched up just 2 percent over the previous year, a slowdown from the 7.7-percent rise in the fourth quarter of 2012.

Next week marks another big week for earnings as 10 members of the Dow and 181 companies in the S&P 500 report results.

On Friday, IBM fell 8 percent to an even $190. Quarterly earnings for the country’s largest provider of computer services fell short of forecasts for the first time since 2005. IBM said delays in closing several large software and mainframe computer deals hindered sales.

In the market for U.S. government bonds, Treasury prices slipped, nudging yields up from their lowest levels of the year. The yield on the 10-year Treasury note inched up to 1.70 percent from 1.68 percent late Thursday.

Traders cautiously returned to buying certain key commodities on Friday, including gold and oil, after big sell-offs earlier this week. But copper continued its fall, losing 2 percent to $3.16 per pound.

•SeaWorld Entertainment soared in its first day of trading as a public company. The theme park operator raised $702 million in its initial public offering, with the bulk of the money going to the Blackstone Group, the private equity firm that still controls the company. SeaWorld’s stock jumped 24 percent to $33.52, up from its IPO price of $27.

•Dell sank 4 percent to $13.40 following news that the Blackstone Group withdrew its bid to buy the computer maker. That left Dell with two remaining bidders: a group led by Michael Dell, the company’s founder and CEO, and Carl Icahn, the well-known investor.