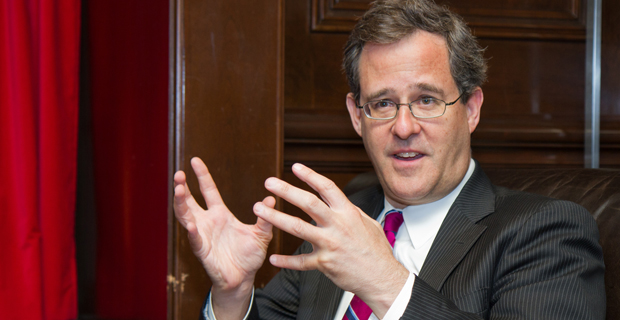 Newspaper executive Tom Allon, who had been the only Jew in the New York mayoral race, gave up his long-shot bid Monday, but he said he plans to keep making his political voice heard through his media outfit, City & State.

“While no longer a candidate, I will continue to passionately and relentlessly pursue a reform education agenda as an education activist, a columnist and blogger” and as a co-owner of a political news organization, Allon said in a statement.

A former public school teacher who went into journalism, Allon switched out of the Democratic Party for his attempt to make it to the 2013 general election ballot. While registered Democrats far outnumber Republicans in New York, no Democrat has won the mayoral election since David Dinkins in 1989.

But with Mayor Michael Bloomberg facing a term limit this year, the GOP field has become more crowded since Allon began eying the mayoralty in 2011. Republican candidates now include billionaire businessman John Catsimatidis, former MTA Chairman Joseph Lhota, and George McDonald, who heads a nonprofit for the homeless. Former Bronx borough president Adolfo Carrion is unaffiliated but running as the Independence Party’s candidate and seeking the Republican nomination.

“I entered this race in 2011 to offer the voters of New York City a choice that was different from the career politicians who at the time seemed likely to be the only mayoral candidates in the campaign-to-come, but the equation has changed in the months since,” Allon said Monday.

Hours after his announcement, Allon had lunch with Lhota, Politicker reported. While they both insisted their meal was prescheduled, Allon did not mind plugging his dining partner a little.

“I have an affection for Joe and, actually, I have to say, one of the reasons I felt comfortable jumping out of the race is because I knew Joe jumped in,” Allon said. “I feel that voters have a good choice now.”

Allon resigned Monday as CEO of Manhattan Media, and bought with an investor Manhattan Media’s City & State, a political biweekly that produces a daily email digest well-read in political circles. Allon said he was withdrawing from the mayor’s race in light of the acquisition.

Allon said that because of his new role with City & State he would not be making an endorsement.

“I would love to make an endorsement,” he said, “[but] City & State never makes [endorsements].”

Allon was the only Jew in the race, although Lhota had said in an interview that his mother was Jewish, making him also Jewish. The Allon surname is Israel, he speaks Hebrew, he has many relatives living there and he has a grandfather buried in Nahariya, according to a Times of Israel profile of the candidate during a visit to Israel last year.

Recent polls had suggested Allon hadn’t made much of an impression on voters: two-thirds or more said they didn’t know enough about him to form an opinion.

But he may serve the city next year, albeit in a different capacity.

“Tom Allon is a friend of mine for 25 years,” Catsimatidis said upon hearing Allon’s plans, “and whatever he does, he has to do his own soul-searching, you know, I always support my friends.”

“Under a Catsimatidis administration,” he added, “I’d love to have him in our education system running things.”

The Associated Press contributed to this story.