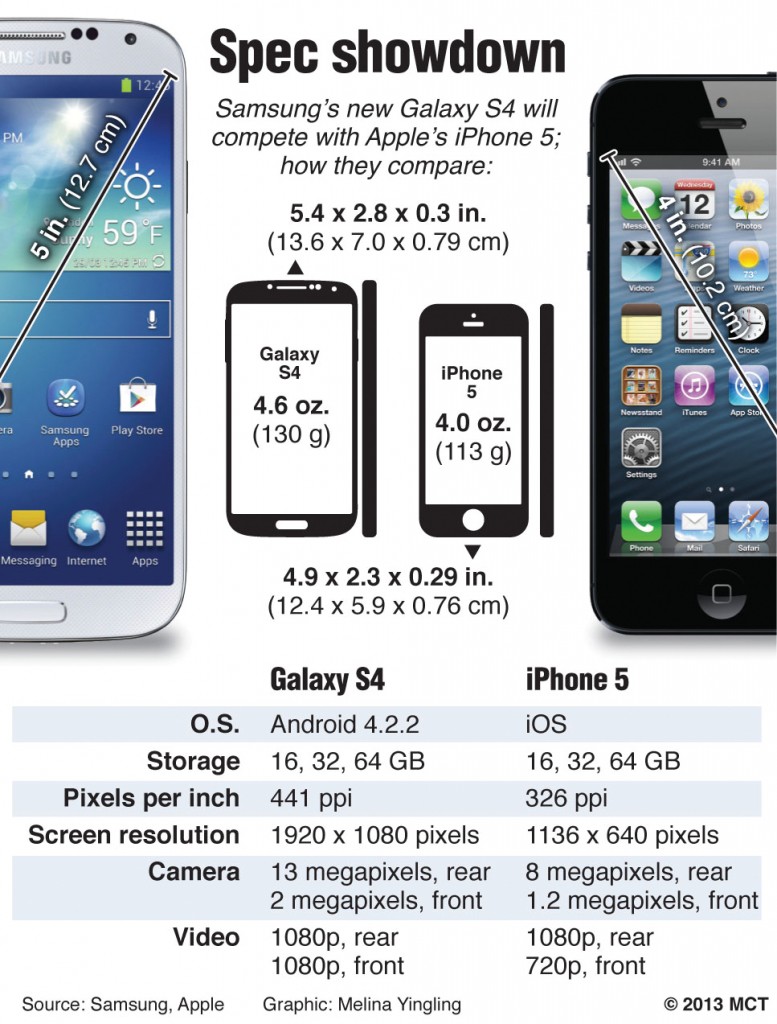 Having grabbed the smartphone lead from Apple, Samsung now seems determined to overwhelm its archrival by announcing a new version of its Galaxy S4 smartphone that’s bigger and better and includes a large laundry list of new features.

With the new Galaxy S4 smartphone that it announced on Thursday, Samsung appears to be trying to prove it can beat the iPhone not only in sales and specs, but in Apple’s bread and butter: software and innovation. But it’s anybody’s guess as to whether the company is taking things too far.

Samsung’s event unveiling the Galaxy S4 is emblematic of the company’s ambitions, its desire to distinguish itself from Apple – and its lack of restraint.

The event was bizarre and over-the-top and in sharp contrast to what we’ve seen from Apple, whose events are typically understated – if overhyped.

That’s true of Apple’s products as well. Each new iPhone has typically had one main feature that distinguishes it from its predecessors and its competition.

The list of new features for the Galaxy S4, by contrast, is both impressive and overwhelming – and maybe more than consumers can get their heads around.

It has a five-inch screen, which is even bigger than its predecessor’s and dwarfs that of the iPhone 5. The display also offers a greater pixel density than Apple’s vaunted Retina Display.

The new phone’s 13-megapixel rear and 2-megapixel front cameras are higher-resolution than those on the iPhone. And unlike Apple’s phone, it includes a humidity and temperature sensor, though it’s not yet clear how that will be used.

It’s true that many of these specs feel more like feature creep than real innovations. For example, if the average person can’t spot the pixels on an iPhone 5, then there really is no need to have a screen with even greater pixel density (and smaller pixels), because no one will be able to tell the difference.

But to a consumer who wants to have a device with the latest and greatest hardware, those specifications may seem impressive.

Samsung, however, isn’t content with just upgrading the hardware. Most of its presentation focused on the new software features it built into the S4. And it’s there that Samsung really may make iPhone fans jealous.

The S4’s camera has several new features. One allows users to incorporate a picture of themselves – taken with the front camera – into a picture or video they take of others. Another will take a burst of pictures and incorporate images from the best of them into one collage. Still another feature allows users to erase unwanted people from photographs.

But the software innovations go beyond the cameras. Perhaps the most innovative involve gesture-recognition and eye-tracking. Users can answer a phone call or turn a page just by waving their hand in front of the phone. The device will scroll pages when users merely tilt it up or down while looking at it, and it will automatically pause videos when users’ eyes leave the screen.

The Galaxy S4 also includes a translator program that’s able to listen to foreign speech and translate it to English and vice versa. It has a feature called Knox that separates work and personal files and applications on the phone. And its video chat feature is now more like a videoconferencing system, able to accommodate three-party calls, allow users to make notes on the screen while talking and stream video from both the front and rear cameras at the same time.

It’s unclear whether any of these new features will catch on with consumers. There are so many of them it may be hard for the company to tout any particular one as the primary selling point of the new phone.

But it’s clear that Samsung is trying to show that the Galaxy S4 is not just as good as or distinct from the iPhone. It’s trying to convince consumers that it’s much, much better.

I’m eager to play with the Galaxy S4 and find out if it is.