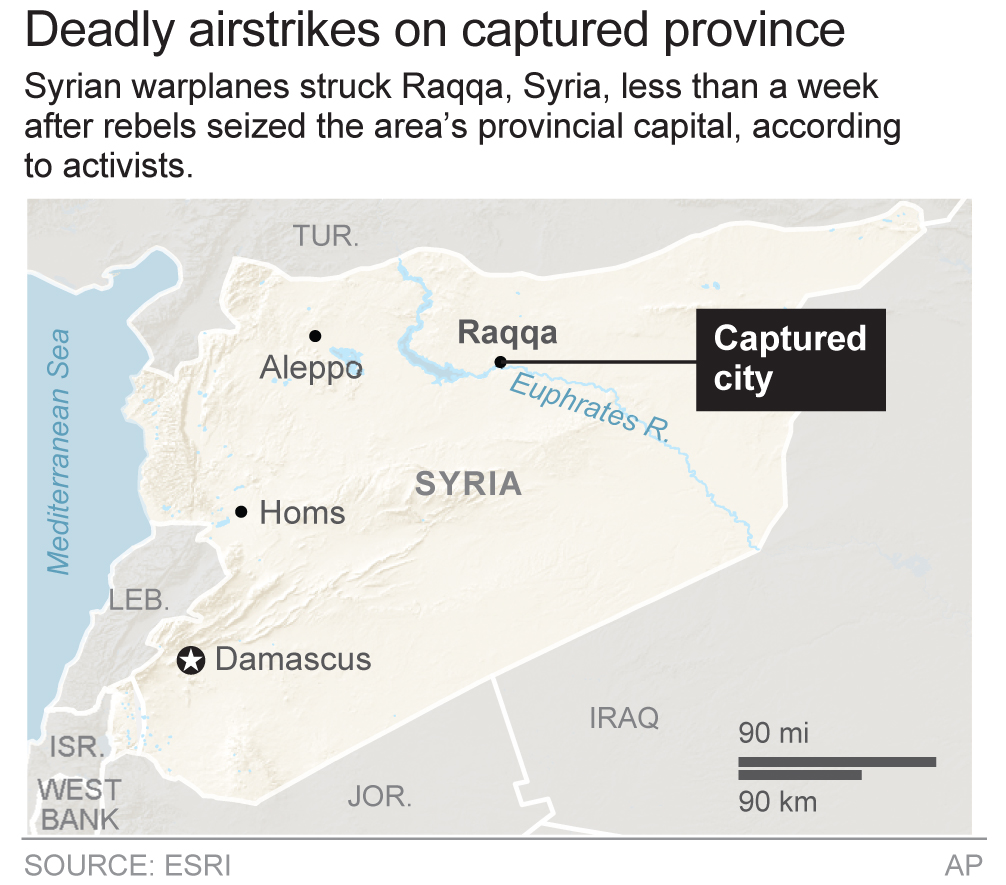 Since rebels seized the capital of Raqqa province in northern Syria from the government last week, they have posted guards at state buildings, returned bread prices to pre-war levels and opened a hotline that residents can phone to report security issues, anti-regime activists said Sunday.

At the same time, they have killed captured security forces in public squares and driven their dead bodies through the streets. The most powerful rebel brigades in the city are extremist Muslims and include Jabhat al-Nusra, which the U.S. government says is linked to al-Qaida.

As the first major Syrian city to fall entirely under rebel control, Raqqa is shaping up to be the best test case yet for how opposition fighters will administer territory amid Western concerns over who will fill the vacuum if President Bashar Assad is ousted. While the city’s new rulers try to govern, they are struggling with the same divisions that have hampered the rebel movement’s effectiveness throughout Syria’s civil war.

The rising power of Islamic extremists in their ranks also could block them from receiving badly needed aid from countries that support the anti-Assad struggle but fear weapons could fall into the wrong hands. The United States recently promised $60 million in new, non-lethal assistance to the opposition inside Syria, and other powers are considering sending arms. Most of these countries would look askance, however, at rebels who seek an Islamic state or stand accused of war crimes.

Rebels in Raqqa reached via phone and Skype on Sunday acknowledged the strength of Islamic brigades but said these groups didn’t seek to impose outside ideologies on the city. “This is not Islamic extremism,” said Abu Yazan, a leader in the Islamist Faithful of Raqqa Brigade. “It is these Islamic movements that freed us from the criminal regime.”

Over the last year, rebels have greatly expanded the territory they hold in the provinces of Idlib and Aleppo along the Turkish border. In February, they extended their control into Raqqa province, seizing a hydroelectric dam on the Euphrates River. After storming a central prison, they seized most of Raqqa city on March 4, solidifying their control over the next two days.

That made Raqqa, a north-central city of 500,000 people, the first of Syria’s provincial capitals to fall entirely under rebel control.

Since then, the city’s rebels have been bedeviled by the same problems that have hindered them elsewhere. Most residents fled during the fighting and have stayed away, fearing the government attacks that often follow rebel takeovers.

Two such strikes hit the province on Saturday, killing at least 14 people, according to activists and a video posted online.

The Syrian government has remained mum on the situation in Raqqa in recent days. It blames the violence in the country on an international conspiracy carried out by terrorists.

Syria’s pro-government al-Watan newspaper denied Wednesday that Raqqa had fallen, while naming officials who had been captured. It said army reinforcements had reached the city and quoted a military official as saying the city would be “freed” in a few days.