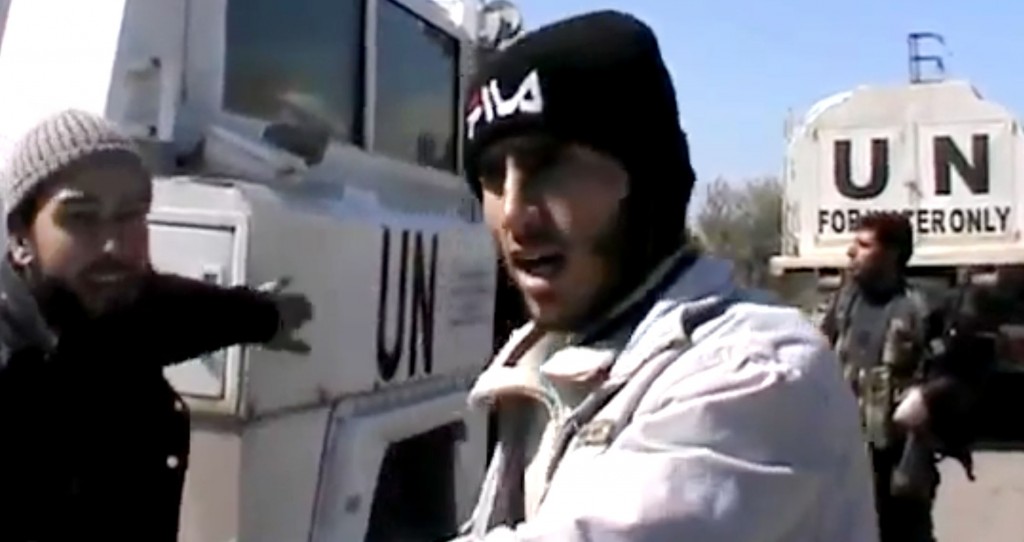 The capture of 21 Filipino U.N. peacekeepers by Syrian rebel forces appeared headed for a peaceful resolution on Thursday night when a rebel officer told the BBC that it was all a mistake.

Brigadier Hossam a-Din Alawak told BBC in Arabic that the Free Syrian Army did not authorize the kidnapping by the Yarmouk brigade, which was acting independently.

The U.N. was negotiating for the release on Wednesday, when their rebel captors demanded the withdrawal of Assad’s army from the village of Jamal in the Syrian Golan Heights as a price for their safe return.

On Thursday, the Yarmouk brigade released a video showing six of the Filipino peacekeepers, who appeared to be in good condition.

Israel has been keeping a low profile during the crisis, monitoring the situation in Syria, which threatens to spill over into Israel as fighting intensifies near the Golan border.

“I don’t believe Israel should do anything, except share with us information that it might learn,”  Filipino Ambassador to Israel Generoso Calonge told The Jerusalem Post. “I don’t expect them to do anything actively or proactively. I would not want Israel dragged in.”

The ambassador said the U.N. was talking with the rebel captors of the 21 peacekeepers who are part of a 333-strong Filipino
contingent in the U.N. Disengagement Force.

Amos Gilad, head of the Defense Ministry’s defense diplomatic-security bureau, told Israel Radio that “restricting the movement of troops in an international force is a significant event” but that the U.N. could be “trusted to persuade” the rebels to free the hostages. He said the rebels were not keen on “getting into a confrontation with the international community.”

But even if the incident does end without harm to the Filipino peacekeepers, Israel is concerned that it could have an adverse impact on the commitment of U.N. members to continue policing the Golan disengagement area.

“This kidnapping is likely to convince countries that participate in this force to bring their troops home, which would undoubtedly create a dangerous vacuum in no man’s land on the Golan,” an Israeli official told AFP, speaking on condition of anonymity. “Since its creation, this force has fulfilled its mission, which was to keep the peace,” he said.

Since 1974, the U.N.’s Disengagement Observer Force (UNDOF) has been monitoring the Syrian side of the armistice line with a force of 1,200 troops, although the number has recently dropped to 1,000 members, supplied by India, Austria and Croatia.

Israeli officials were quoted in the local media as saying they fear the U.N. force in the area would “be dismantled and that al-Qaida members will take control of the buffer zone between Israel and Syria. There is concern that al-Qaida will take over this buffer zone and the villages near Israel,” a 50-mile strip of land.

Meanwhile, clashes between Syrian troops and rebels flared close to the Israeli side of the Golan on Thursday. An observer from a British-based human rights group said the fighting was concentrated on the outskirts of the Syrian village of Jamlah, only one kilometer (three-fifths of a mile) from Israeli territory.

Phillipine President Benigno Aquino told reporters the peacekeepers were being well treated and that the United Nations was in touch with the rebels to ensure their safety. “By tomorrow they expect all of these 21 to be released,” he said, adding their release might occur as early as Thursday.

“The U.N. observers were on a regular supply mission and were stopped near Observation Post 58, which had sustained damage and was evacuated this past weekend following heavy combat in close proximity at Al Jamla,” the United Nations said.

It said the peacekeepers were taken by around 30 fighters.