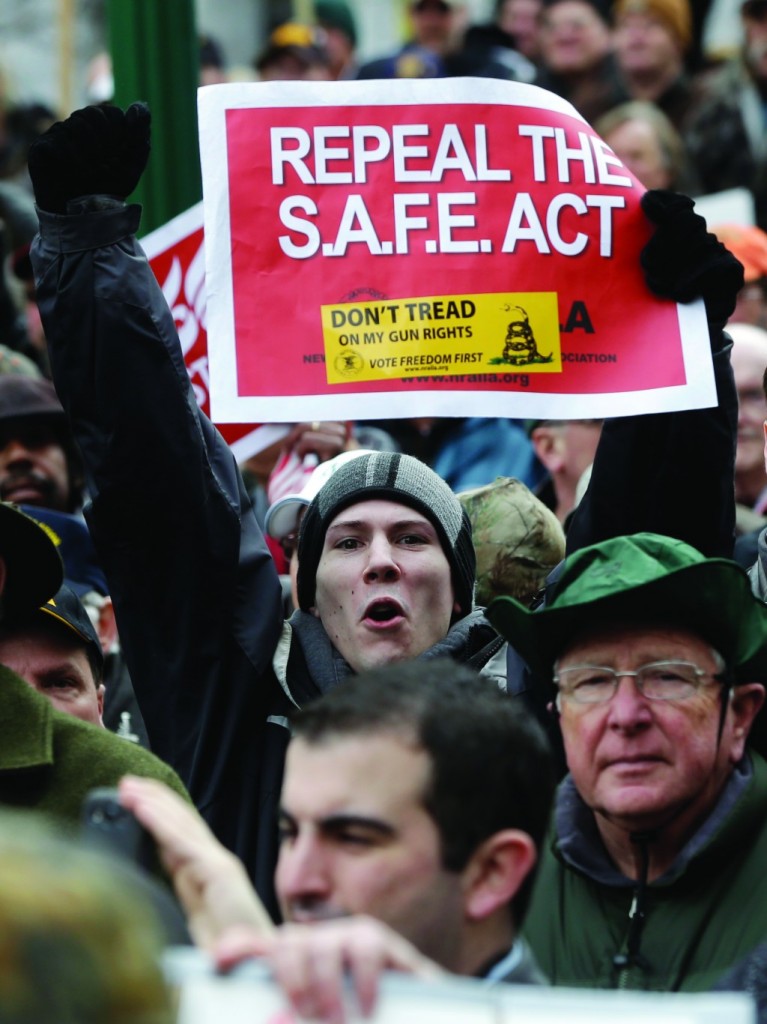 National Rifle Association President David Keene told a rally of thousands of opponents of New York’s new gun control law Thursday that his group will help them ensure that the Second Amendment rights passed down to them will be passed on to future generations.

“We’ve lost battles before. We will not lose the war,” Keene said. He was cheered by the throng that filled the Albany park west of the Capitol, many arriving on buses from across the state and advocating repeal of one of the toughest gun-control laws in the U.S.

“New York has proven once again that it can top Washington in terms of the high-handedness of some of the people that hold its highest offices,” Keene said. “I’m here to join you in protesting the fact that your governor is willing to sacrifice the Constitution, your rights as citizens and the prerogatives of his legislature on the altar of his own ambition and on the ego of Michael Bloomberg of New York City.”

“We will not comply,” the crowd chanted. Several protesters said it is unconstitutional, violating their right to bear arms. They also chanted, “Cuomo’s got to go.”

Administration officials declined to respond directly but noted that a recent poll showed 65 percent of New Yorkers support the law and that the crowd was half the 10,000 organizers said they expected. That Siena College poll showed strong support in the greater New York City area, with opposition in many upstate counties.

Two lines in the morning stretched through the underground concourse of Empire State Plaza in downtown Albany, with a mass of demonstrators waiting to pass through checkpoints and metal detectors to enter the Capitol.

Extra state troopers were on duty. They estimated the crowd at “5,000-plus,”  spokeswoman Kristin Lowman said. No incidents were reported.

The New York Rifle & Pistol Association, organizer of the rally, and other opponents have filed notice of their intent to sue in an attempt to overturn the law. At least 22 counties, whose clerks and sheriffs would be responsible for registration and enforcement, have passed resolutions calling for at least partial repeal.

Thomas Hranek, an engineer from Endicott and military veteran with two sons in the Army, said it’s a significant issue because the Second Amendment “undergirds the rest of our freedoms.” Cuomo had been doing well until forcing through this law, he said, adding that he could never get elected president now.

Cuomo has said the new law “will limit gun violence through common sense, reasonable reforms that include addressing the risks posed by mentally ill people who have access to guns and banning high capacity magazines and lethal assault weapons.”

While the Cuomo administration and legislators are discussing possible amendments, the only ones disclosed so far would clarify that exemptions for filmmakers firing blanks and for police will continue under the new law.