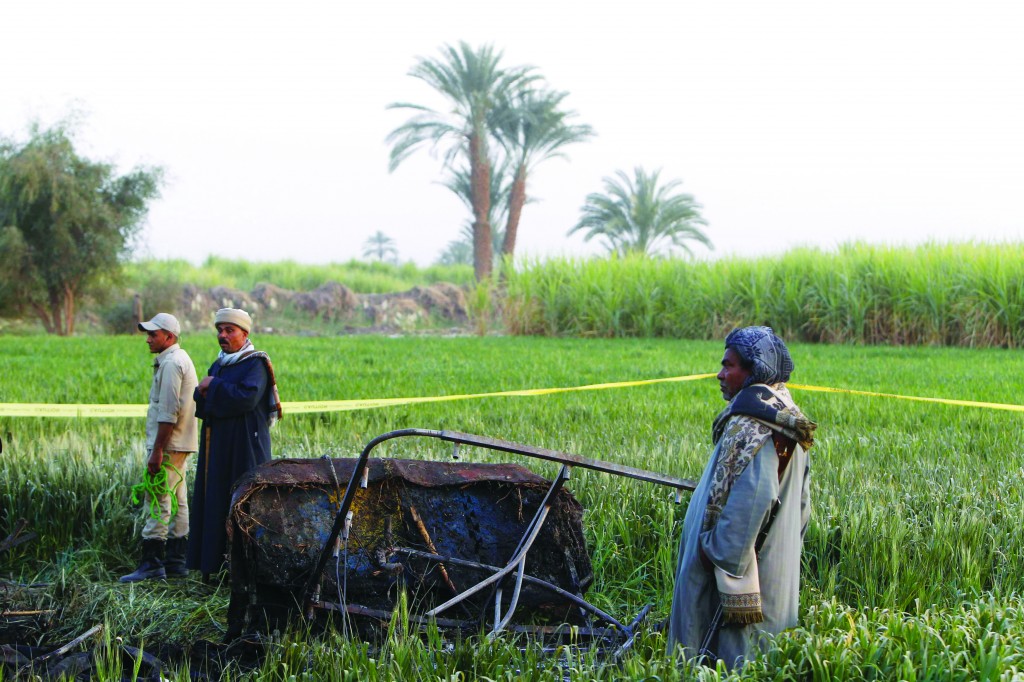 The terror lasted less than two minutes: Smoke poured from a hot air balloon carrying sightseers on a sunrise flight over the ancient city of Luxor, then it burst into flame and plummeted about 1,000 feet to earth. A farmer watched helplessly as tourists trying to escape the blazing gondola leaped to their deaths.

Nineteen people were killed Tuesday in what appeared to be the deadliest hot air ballooning accident on record. A British tourist and the Egyptian pilot, who was badly burned, were the sole survivors.

The tragedy raised worries of another blow to the nation’s vital tourism industry, decimated by two years of unrest since the 2011 revolution that toppled autocrat Hosni Mubarak. The southern city of Luxor has been hit hard, with vacant hotel rooms and empty cruise ships.

The accident also prompted accusations that authorities have let safety standards decline amid the political turmoil and infighting, although civil aviation officials said the balloon had been inspected recently and that the pilot may have been to blame, jumping out rather than stopping the fire.

The balloon was carrying 20 tourists— from France, Britain, Belgium, Japan and Hong Kong— and an Egyptian pilot on a flight over Luxor, 510 kilometers (320 miles) south of Cairo, officials said. The baloon flights provide spectacular views of the ancient Karnak and Luxor temples and the Valley of the Kings, the burial ground of Tutankhamun and other pharaohs.

According to initial indications, the balloon was in the process of landing after 7 a.m. when a cable got caught around a helium tube and a fire erupted, according to an investigator with the state prosecutor’s office.

The balloon then ascended rapidly, the investigator said. The fire detonated a gas canister and the balloon plunged about 1,000 feet to the ground, crashing in a sugar cane field outside al-Dhabaa village just west of Luxor, a security official said.

Both the investigator and the security official spoke on condition of anonymity because they were not authorized to talk to the media.

The toll surpasses what was believed by ballooning experts to be the deadliest accident in the sport’s 200-year history: In 1989, 13 people were killed when their hot air balloon collided with another over the Australian outback near the town of Alice Springs.

An aviation official, speaking on condition of anonymity because he wasn’t authorized to talk to reporters, blamed the pilot, saying initial results of the investigation showed he jumped out when the fire began, instead of shutting off valves that would have prevented the gas canister from exploding.

The crash added to the woes for residents of Luxor. Scared off by the turmoil and tenuous security following the uprising, the number of tourists coming to Egypt fell to 9.8 million in 2011 from 14.7 million the year before, and revenues plunged 30 percent to $8.8 billion. Last year saw a slight rise, but most tourists go to the beach resorts of the Red Sea, staying away from Nile Valley sites like Luxor.

That has been devastating for the local economy, with some government estimates saying that 75 percent of the labor force is connected to tourism. Luxor’s hotels are about 25 percent full in what is supposed to be the peak of the winter season.

Poverty swelled at the country’s fastest rate in Luxor. In 2011, 39 percent of its population lived on less than $1 a day, compared with 18 percent in 2009, according to government figures.