Stocks had their worst drop in more than three months as the prospect of political paralysis in Italy raised the specter of Europe’s debt crisis flaring up again.

Stocks had rallied in the early going as exit polls showed that a center-left coalition in Italy that favored economic reforms in the euro region’s third-largest economy was leading. That gain evaporated after a later poll predicted that the elections could result in a stalemate in the country’s legislature. The losses accelerate in the late afternoon as partial official results showed an upstart protest campaign led by a comedian making stunning inroads.

“There was confidence in this election and obviously confidence imploded,” said Ben Schwartz, a market strategist at Lightspeed Financial.

Investors dumped Italian government bonds, sending their yields higher, and erased most of an early rally in Italy’s stock market. The yield on Italy’s 10-year government bond shot up to 4.43 percent from 4.12 percent early in the day, a sign that investors’ confidence in Italy’s government was dimming quickly. The country’s benchmark stock index, the FSTE MIB, rose 0.7 percent, giving up an early gain of 4 percent. 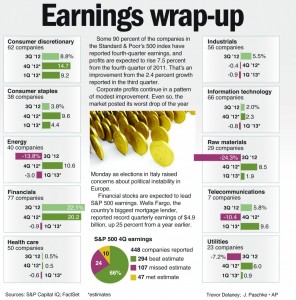 Investors worry about the outcome of Italy’s election because it could set off another crisis of confidence in the region’s shared currency, the euro. Financial markets in both Europe and the U.S. have swooned at the prospect of Italy or Spain being dragged into the region’s government debt troubles, which have led to bailouts of Greece, Ireland and Portugal and severe disruptions in financial markets.

As stocks plunged, gauges of market sentiment indicated that investors were becoming more risk-averse and parking their money in defensive assets. The yield on the 10-year Treasury note, which is widely considered an ultra-safe investment, fell sharply as investors plowed money into U.S. government bonds. The yield fell to 1.88 percent from 1.96 percent late Friday.

The VIX index, a measure of how volatile investors expect the stock market to be, surged 34 percent to 19, the biggest one-day move since August 2011.

On the New York Stock Exchange, Barnes & Noble rose $1.55, or 12 percent, to $15.06 after founder and chairman Leonard Riggio told the bookseller he is going to try to buy the company’s retail business. Hertz advanced 31 cents, or 1.7 percent, to $19.04, despite posting a fourth-quarter loss, after the rental car company said that pricing improved, volume rose and it cut costs.

The Standard & Poor’s 500 had its first weekly decline of the year last week. Investors sent stocks plunging after minutes from the Federal Reserve’s latest policy meeting revealed disagreement over how long to keep buying bonds in an effort to boost the economy.

Fed chairman Ben Bernanke will testify before the U.S. Senate’s banking committee Tuesday and again before Congress on Wednesday. Investors will watch to see if he gives any further indications about how long the central bank intends to keep providing stimulus to the economy.

Analysts say the Fed’s bond-buying program and resulting low interest rates were a big driver behind this year’s stock rally. The Dow gained 6.3 percent this year and the S&P 500 5.6 percent, pushing both near record levels. The Dow’s record close is 14,164, reaching in October 2007 and the S&P closed as high as 1,565 in the same month.

European stocks also advanced, but gave back much of their early gains. Benchmark indexes rose 0.4 percent in France, 1.5 percent in Germany and 0.8 percent in Spain. Britain’s index was up just 0.3 percent after Moody’s stripped the country late Friday of its triple-A credit rating.