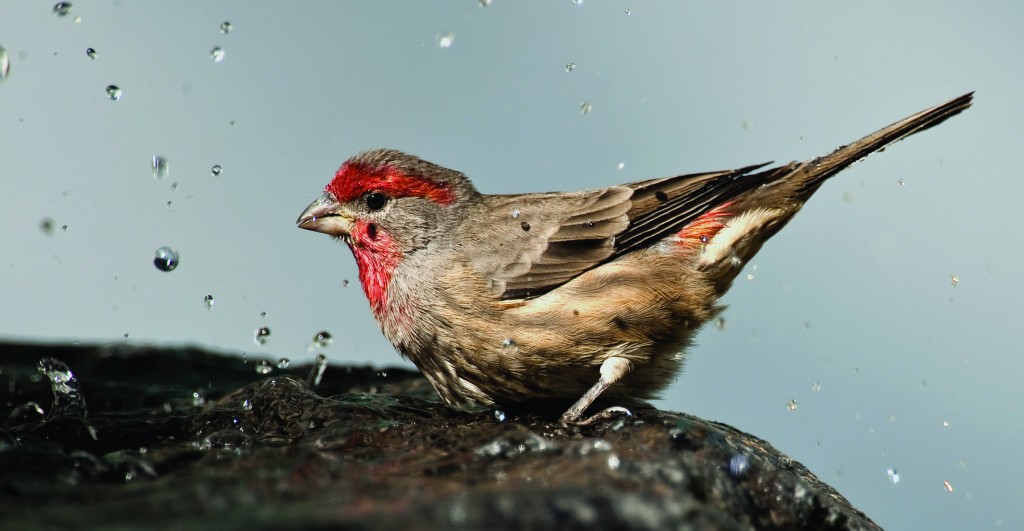 North Jersey is in the midst of an invasion from Canada.

The feathered intruders — finches, to be exact — normally spend winter far to the north but have been arriving here in waves over the past several months, giving birders a rare winter treat.

Clouds of redpolls, a species of finch, have taken over a large stand of birch trees in Losen Slote Creek Park in Little Ferry. “The trees were just loaded with them one morning,” Don Torino, president of the Bergen County Audubon Society, told The Record of Woodland Park.

That, in turn, has drawn flocks of bird-watchers to the park.

The redpolls make a distinctive buzzing sound. “You could hear them before you could even see them,” Torino said. “And then there were birders from all over the state wandering through the woods.”

While the redpolls have been landing en masse, other, more exotic birds have been discovered — including a lost American white pelican and a pink-footed goose.

The invasion  has been spurred by lack of food in the birds’ normal range. They feed on the seeds of conifer trees, and in seasons when pine cones are few they head south to scavenge for other food sources.

These birds normally remain in Canada. But the trees there go through boom and bust cycles, some years producing few cones and other years producing a wild abundance. It’s actually a survival strategy for the trees: produce so many seeds one year that it’s impossible for the birds to eat them all; produce so few other years that it keeps the bird population in check, said David Bonter, a bird migration expert at the Cornell Lab of Ornithology.

The redpolls showed up more than a month ago, and some have continued on as far as North Carolina. These birds have a reddish cap on their heads, a black beard around the beak and pinkish chest feathers.

Ringwood resident Susan Grimstead has had 50 or more redpolls at a time around her backyard feeders, mixed in with more typical winter residents. “Some days there are too many to count. It gets a little noisy, but it’s also exciting — you don’t expect to even see them in the first place,” she said.

“Birders love these reports,” said Pete Bacinski, who writes a blog called “All Things Birds” for the New Jersey Audubon Society. “These are the kinds of thing they crave.”

To track the irruption of finch species this winter, the Cornell Lab of Ornithology has issued a call for more volunteers to participate in its 26th annual Project FeederWatch, which lasts through April. Volunteers submit observations on the species that show up at their backyard bird feeders.

“This has been a dream winter for folks who put out backyard feeders,” Bonter said.