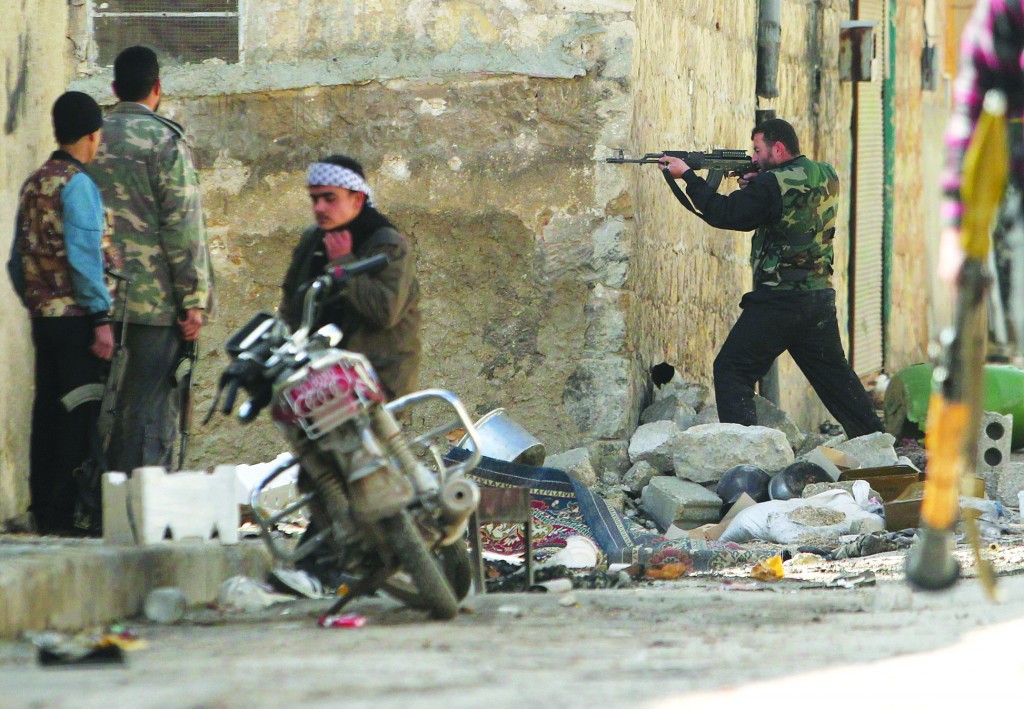 Rebels captured a small military base near Aleppo on Tuesday and stormed another in the same area that protects a major airport, a day after seizing Syria’s largest dam.

With the back-to-back blows to President Bashar Assad’s regime, opposition fighters appear to be regaining some momentum, expanding their northern zone of control while at the same time pushing deeper into the heart of the capital, Damascus.

Rebels have been attacking Aleppo’s civilian airport, which remains in regime hands, for weeks. They now appear to have removed the main defenses around the facility. Civilian flights stopped weeks ago because of the intensity of the fighting.

In New York, U.N. human rights chief Navi Pillay said the number of people killed in Syria is probably now approaching 70,000. Her comments came less than six weeks after she said the death tollh  ad exceeded 60,000, a figure that at the time she called “truly shocking.”

She told the U.N. Security Council that there have probably been almost 10,000 new deaths in recent weeks. Pillay said the council’s deep division and inaction over the nearly 2-year-old conflict had been “disastrous” and that civilians on all sides had paid the price.

As rebels made new conquests in the northern provinces of Aleppo and Raqqa, they also fought street by street in the eastern city of Deir el-Zour, near the border with Iraq. They were trying to capture the city, a provincial capital of an oil-rich region that carries the same name.

Rebels control wide areas in the three provinces. But if they can fully capture them, it would put them in control of the country’s water and oil resources as well as wheat fields.

“If they (three provinces) fall in the hands of the rebels, it will be a strategic strike against the regime,” said Rami Abdul-Rahman, who heads the Britain-based Syrian Observatory for Human Rights, an anti-regime activist group.

Abdul-Rahman said that after days of sporadic clashes around the Jarrah airfield, rebels launched a major assault on the base on Monday and had overrun the facility by Tuesday morning.

He said several regime troops in the area were killed or wounded in the fighting, while others fled as the rebels advanced. There was no word on opposition casualties.

The airfield, which is located near the Al-Furat dam captured on Monday, housed fighter jets used in airstrikes on rebel held-areas.

A video posted online by activists showed several military aircraft at Jarrah, some parked on the tarmac and another in a hanger with boxes of ammunition piled up against a wall nearby.

“These warplanes are now in the hands of Ahrar al-Sham Islamic movement,” one rebel says in the video, referring to a rebel unit.

The video appeared genuine and corresponded to other Associated Press reporting on the events depicted.

The air base is located near the northeastern town once known as Tabqa. The town’s name changed to Thawra, Arabic for revolution, after the Al-Furat dam was built there in the late 1960s.

Rebels also stormed a second base on Tuesday.

The Observatory and Aleppo Media Center said opposition fighters captured large parts of the “Brigade 80” base near the city’s main civilian airport.

The rebels were also attacking another major air base, Nairab, adjacent to the international airport and took control of al-Manara army checkpoint just outside it, the Observatory and AMC said. The Observatory said there were dozens of casualties.

Reporting from Aleppo, Syrian state media correspondent Shadi Halawi said the city’s international airport was “100 percent safe,” although he acknowledged that rebels were able to enter the “Brigade 80” base. Government troops were pushing them out, he said.

Rebels control many areas in the north and east of the country, and hold whole neighborhoods in Aleppo, Syria’s largest urban center and its main commercial hub. The government maintains a tight grip on Damascus, and central provinces, including Homs and Hama.