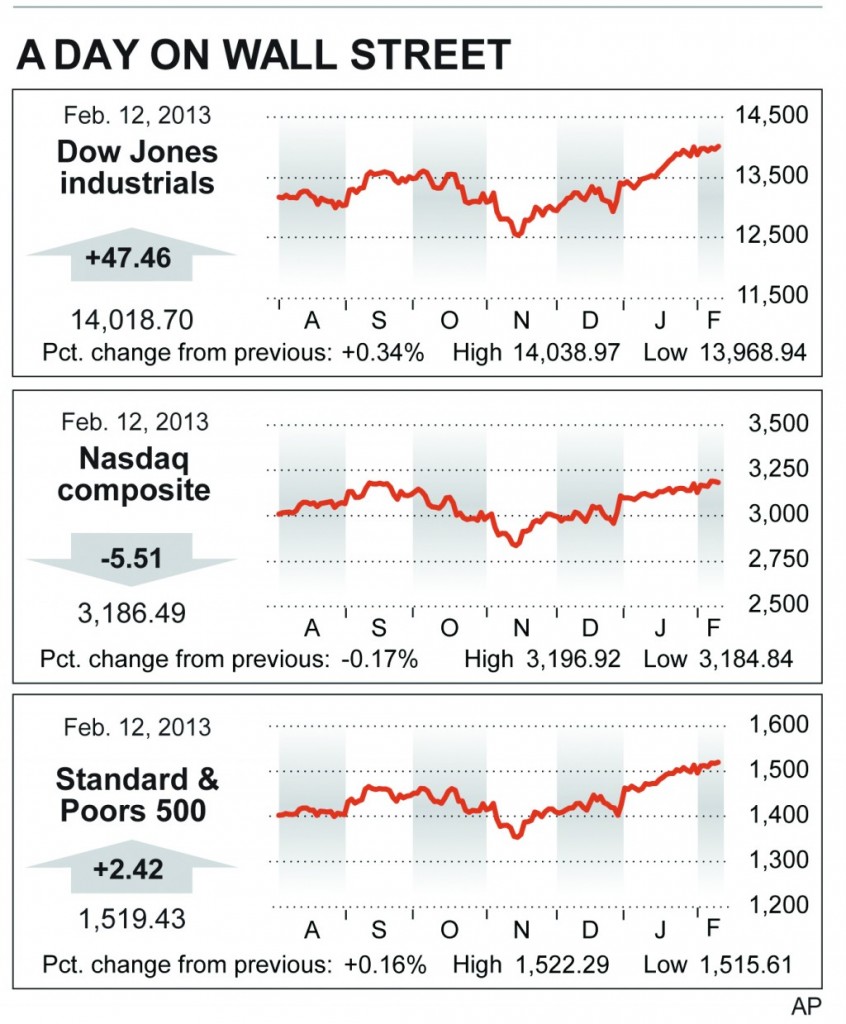 The Dow rose to its highest close of the year, putting it within 1 percent of its record. Stocks gained after impressive results from two big consumer brands.

In a quiet day of trade, stocks were driven higher by beauty products maker Avon and luxury clothing and accessories company Michael Kors, whose results impressed investors. Consumer spending accounts for 70 percent of economic activity in the U.S.

Financial and home building stocks also lifted stocks, led by Bank of America and Masco Corp, which notched some of the day’s biggest gains.

The Dow has surged at the start of the year, logging its best January in almost two decades, after lawmakers reached a last-minute deal to avoid the “fiscal cliff” of sweeping tax increases and spending cuts. Investors are also becoming more optimistic that the housing market is recovering and that hiring is picking up.

The 30-member Dow has now closed above 14,000 twice this month. Before February, the index had closed above that level just nine times in its history. The first time was in July 2007; the rest were in October of that year.

Avon’s stock price jumped $3.51, or 20 percent, to $20.79 after the company posted a fourth-quarter loss that wasn’t as bad as analysts expected. The company also hopes to save $400 million by slashing costs. Michael Kors rose $5, or 9 percent, to $62 after reporting earnings that beat analysts’ predictions.

Bank of America was the biggest gainer on the Dow, adding 38 cents, or 3.25 percent, to $12.24. Stocks gaining in the index outnumbered those falling by a ratio of more than four to one.

Two stocks rose for every one that fell on the New York Stock Exchange. Trading was lighter than the recent average at 3.3 billion shares.

About 70 percent of companies in the S&P 500 have reported earnings for the fourth quarter. Analysts are projecting that earnings will rise 6.4 percent for the period, an improvement from the 2.4 percent growth reported in the third quarter, according to S&P Capital IQ.

Investors may have become too optimistic about the outlook for stocks, said Uri Landesman, president of hedge fund Platinum Partners. “The market is priced for perfection,” said Landesman. “The odds of a disappointment are very, very high.”

Landesman predicts that the S&P 500 will climb past its record and rise as high as 1,600 by April before then slumping as low as 1,300 as company earnings start to disappoint investors. The record close for the S&P 500 is 1,565, reached in October 2007.

Investors appear to be supporting the market by stepping in to buy stocks when prices dip, said JJ Kinahan, chief derivatives strategist at TDAmeritrade. The S&P 500 has gained for six straight weeks since the start of the year.

Confidence in the outlook for global growth has strengthened among asset managers in recent months, according to a Bank of America Merrill Lynch survey. The poll found that 59 percent of investors believe the global economy will strengthen in the year ahead, in line with the reading in January. The outlook for growth had improved in the four previous months.

Investors will be watching closely Tuesday night when President Barack Obama delivers his annual State of the Union speech. Obama is expected to focus on the economy, including job creation.