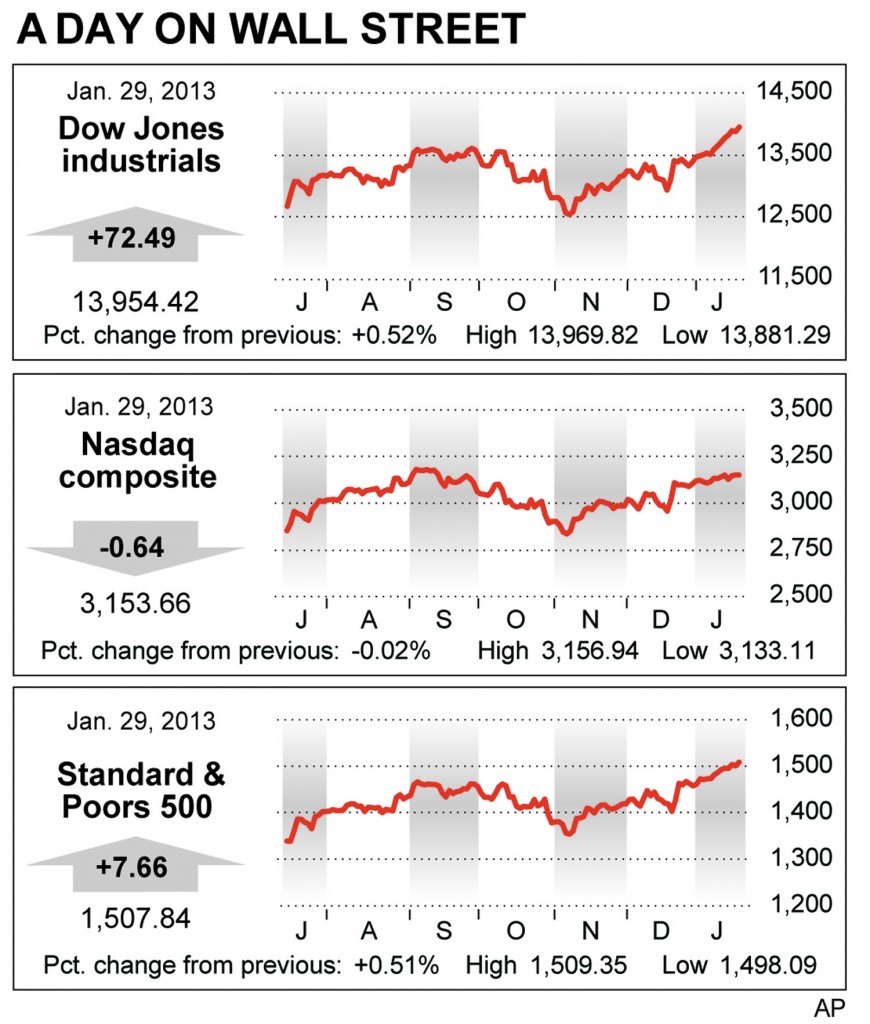 The January rally looked as if it was running out of steam yesterday as stocks pulled back from their highs, but Tuesday they resumed their ascent toward record levels. Demand was bolstered at the start of the year after lawmakers reached a deal to avoid the “fiscal cliff” and was sustained by reports that have added to evidence that the U.S. housing market is recovering and the jobs market is slowly healing.

The Dow is 6.5 percent higher this month and the S&P 500 is up 5.7 percent. Both indexes are at their highest levels in more than five years.

Pfizer was the biggest gainer in the Dow, advancing 86 cents, or 3.2 percent, to $27.70 after the company said its fourth-quarter profit more than quadrupled because of a $4.8 billion gain from selling its nutrition business and despite competition from generic drugs hurting sales. Homebuilder D.R. Horton gained $2.51, or 11.8 percent, to $23.82 after it said that net income more than doubled as the housing recovery took hold. Improving home prices and better sales bolstered profits.

“The earnings season is not stellar, but it’s better than last quarter,” said Quincy Krosby, a market strategist at Prudential.

Analysts expect fourth-quarter earnings for 2012 to increase by an average of 4.7 percent for S&P 500 companies, according to the latest data from S&P Capital IQ. That’s an improvement on the previous quarter when profit grew by 2.4 percent.

Valero Energy, a refinery operator, was the biggest gainer in the S&P 500. The company’s stock climbed $4.96, or 13 percent, to $43.77 after the company said that fourth-quarter profit soared on higher refining margins, as it swapped out foreign crude for cheaper domestic oil.

Investor optimism was checked by a report that showed U.S. consumer confidence sank in January to the lowest level in more than a year as Americans fretted about the economic outlook and higher Social Security taxes. The Conference Board said that its consumer confidence index dropped to 58.6 in January, down from a reading of 66.7 in December.

Stocks also failed to get much of a lift from a report published before the market opened that showed the U.S. housing market is sustaining its recovery.

The Standard & Poor’s/Case-Shiller 20-city home price index rose 5.5 percent in November compared with the same month a year ago, pushed higher by rising sales and a tighter supply of available homes.

“The turnaround in the housing market is for real,” said Peter Cardillo, chief market economist at Rockwell Global Capital, who says the decline in consumer confidence will likely prove to be temporary as home prices rise. He predicts the S&P 500 may climb as high as 1,575 this quarter as investor optimism about the economic recovery grows.

The Federal Reserve started a two-day meeting Tuesday. Investors will also be looking at the release of their statement Wednesday for clues about the outlook for the economy and interest rates. The yield on the 10-year Treasury note rose by four basis points to 2 percent. The yield, which moves inversely to its price, is at its highest level since April.

Other stocks in the news;

– Ford fell 64 cents, or 4.6 percent, to $13.14 despite reporting earnings that beat analysts’ estimates. Ford said that its losses in Europe would be bigger than it had previously forecast. The company’s stock has advanced 49 percent in the last six months.