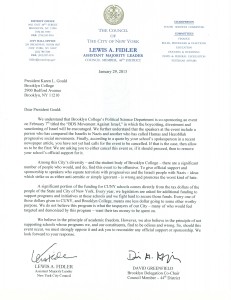 Members of the City Council mailed a letter Wednesday to the President of Brooklyn College, Karen Gould, objecting to the college hosting and “co-sponsoring” of a “BDS Movement Against Israel” event on February 7. The letter calls on her to either cancel the event or remove any official sponsorship or support. BDS, which stands for “boycott, divestment, sanctions” is an ongoing effort to delegitimize and isolate Israel.

Councilman Fidler said, “I understand the right of students to express their various viewpoints, no matter how much I may disagree with them. A line is crossed, however, when the school itself is painting a veneer of legitimacy over something that is so clearly offensive to me and to so many of the people in our community.”

Councilman David Greenfield said he was “especially disappointed in the lack of judgment from Brooklyn College’s administration,” pointing out that colleges which rely on public funding and support must ensure they do not serve as an outlet for groups spreading “divisive, odious anti-Israel messages.”

Assemblymen Steven Cymbrowitz and Dov Hikind announced Wednesday they will lead a rally protesting the event on Thursday, Jan. 31.

“No department or club in Brooklyn College, which boasts a richly diverse student body, has any business sponsoring events on the college campus that serve no useful purpose but to
promulgate anti-Semitism,” said Cymbrowitz.

Assemblyman Hikind said the forum “gives a platform to the BDS movement, whose goal is to de-legitimize Israel’s existence.”

This article appeared in print on page 4 of the January 31st, 2013 edition of Hamodia.