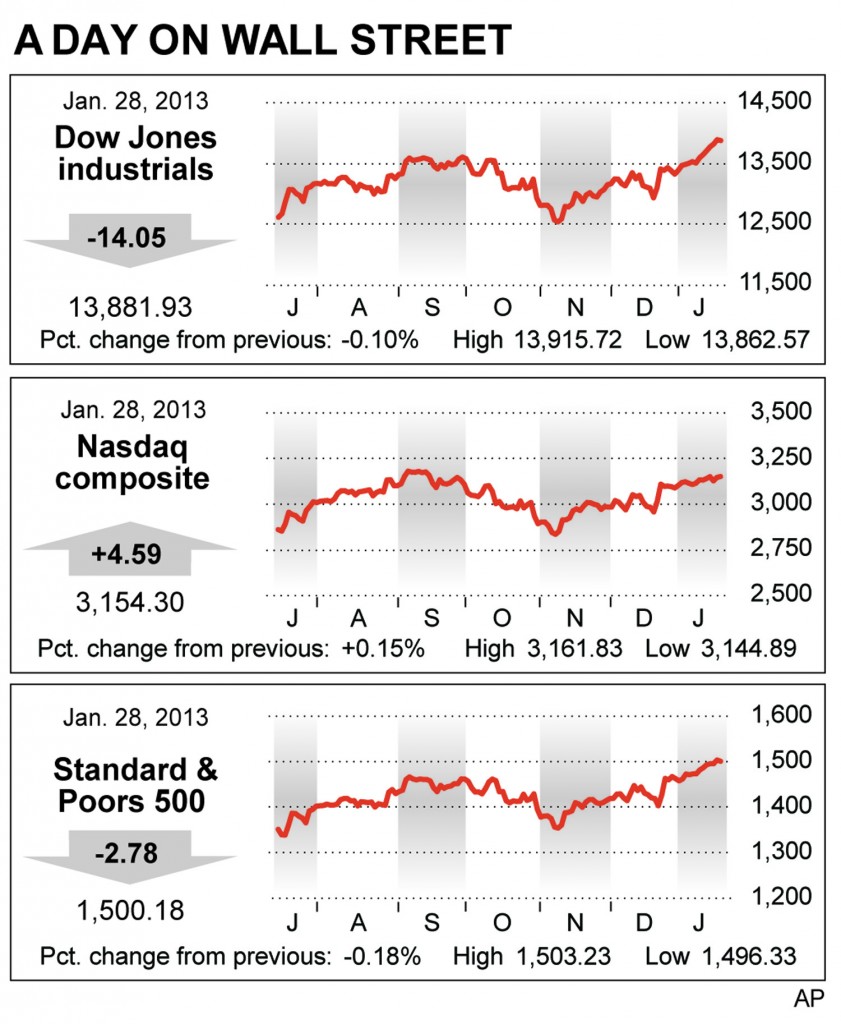 U.S. stocks meandered between small gains and losses Monday, cooling off after a rally that had pushed the Standard & Poor’s 500 index above 1,500 for the first time since December 2007. Encouraging news about manufacturing provided an early boost, but stocks fell later after a report on the pace of home sales fell short of expectations.

The government said before trading began that orders for long-lasting goods rose in December by 4.6 percent, helped by a 10 percent gain in orders for new aircraft. The report was a sign of strength for the manufacturing sector, a crucial driver of economic growth.

Heavy equipment maker Caterpillar said separately that its fourth-quarter net income exceeded analysts’ expectations, after adjusting for the cost of a soured deal to buy a Chinese maker of roofing supports for mines. Caterpillar said it took a big charge in the quarter because the Chinese company had misrepresented its finances.

The Dow Jones transportation index, a proxy for future economic activity, edged higher, notching its tenth straight increase and its twelfth gain in the past 13 trading days.

A half-hour after trading began, the National Association of Realtors said that its index of pending home sales fell in December, suggesting that sales of previously-occupied homes may slow in the coming months. The report, which was weaker than many economists had expected, helped push stocks lower for much of the morning. They were roughly flat by midday, and spent the afternoon swapping small bumps and dips.

Among companies in the S&P 500 that reported earnings Monday, Biogen Idec Inc. said its fourth-quarter net income slipped nearly 3 percent because of a tax charge and higher expenses. Still, the biotech drug maker rose $3.79, or 2.6 percent, to $149.99.

Roper Industries Inc., which makes medical and industrial equipment, said its fourth-quarter net income rose 18 percent. But the company issued mixed guidance for the current quarter and full year 2013. It fell 33 cents to $118.50.

Oil company Hess Inc. was the biggest gainer in the S&P 500, adding 6.1 percent after the company said it plans to sell its U.S. terminal network, shutter its New Jersey refinery and continue shifting its focus to exploration and production. Hess also said that the hedge fund Elliott Associates plans to seek regulatory approval to buy a major stake in the company. Hess rose $3.58 to $62.48.

There will plenty of fresh data to drive trading this week, including retail sales, economic growth and the government’s report on hiring and employment in January, which is due out Friday. More than one-fifth of the companies in the S&P 500 will report fourth-quarter earnings this week.

The yield in the benchmark 10-year Treasury note rose to 1.97 percent from 1.95 percent late Friday, reflecting lower demand for ultra-safe investments. After Monday’s factory orders report, the yield rose briefly above 2 percent for the first time since April. A bond’s yield rises as demand for it decreases.