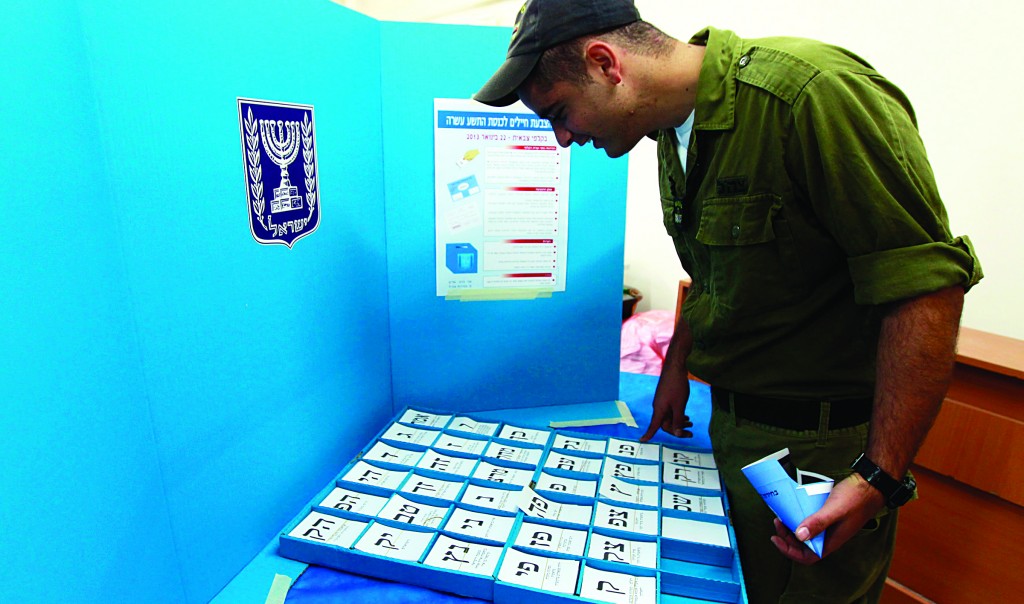 Two days before national elections, Israeli Prime Minister Binyamin Netanyahu on Sunday shrugged off international criticism of his policy of construction in Yehudah and Shomron, asserting instead that Iran’s nuclear program posed the real threat to regional security.

Speaking at the weekly Cabinet meeting, Netanyahu said he had told a group of visiting U.S. senators over the weekend that “the problem is not building… The problem in the Middle East is Iran’s attempt to build nuclear weapons… This was, and remains, the main mission facing not only myself and the state of Israel, but the U.S. as well.”

In his comments Sunday, Netanyahu signaled that construction will continue. He also praised the legacy of Ron Nachman, the longtime mayor of Ariel, who died on Friday. Ariel, with nearly 20,000 residents located in the middle of the Shomron, was one of the issues that Israeli and Palestinian negotiators failed to reach agreement on during the term of Prime Minister Ehud Olmert.

“Today we part from our dear friend who managed to build Ariel into a city of culture, with a university. I regret that he did not have additional years in which to enjoy the fruit of his labors,” Netanyahu said. The government recently approved upgrading a college in Ariel to university status despite opposition from Israel’s left-wing.

While polls have shown Likud-Beiteinu winning the election with varying numbers ranging from 32 to 38 Knesset seats, the makeup of the next coalition remained less clear.

Likud officials were circumspect about which parties they preferred as future partners. Netanyahu’s campaign chairman, Education Minister Gideon Saar, claimed Thursday that the party hasn’t even started thinking about building the coalition.

“This would send the wrong message that we’ve already won,” Saar told an interviewer, reflecting concerns that fewer Knesset seats will put the party in a weak position for coalition negotiations.

Saar’s comment was at odds with statements made by his colleagues recently indicating that they have indeed been making calculations for the day after elections, without chareidi parties. Avigdor Lieberman spoke about taking ministerial positions away from Shas. Netanyahu himself has said that he wants a “broader-based” coalition, which presumably means including Tzipi Livni’s new party The Movement and Yesh Atid, led by Yair Lapid.
Labor party leader Shelly Yacimovich has stated she will not join a Netanyahu government.

Both candidates have promised to drive a hard bargain. On Thursday night, Livni said she would join Netanyahu only if there are serious peace efforts and she is given a key role, a prospect Likud has already rejected.

“I will not sit in a government that will continue the stalemate,” the former foreign minister said.

Lapid has indicated more flexibility, focusing his campaign primarily on the plight of Israel’s struggling middle class. But he told The Associated Press this week that he would not be a “fig leaf” for what he called an extremist government.

Meanwhile, the campaign took an ugly turn, as incidents of vandalism were reported at both Tzipi Livni’s party and Shas headquarters.

At Shas offices in Or Yehuda on Motzoei Shabbos, unidentified vandals set fire to several sifrei kodesh, according to Israel Radio.

Shas MK Ariel Attias blamed the incident on months of incitement against Hagaon Harav Ovadia Yosef, shlita, and the Shas party, of which he is the spiritual leader.

“There are no words to express the horror of knowing that a Jew burnt a holy book. It just breaks your heart,” local Shas organizer Uzi Aharon told Ynet.

On Sunday morning, vandals sprayed graffiti on the walls of the Tzipi Livni Party headquarters in Tel Aviv, according to a party statement. The graffiti read: “Yigal Amir was right,” in a reference to former prime minister Yitzhak Rabin’s murderer.

In addition, a large poster of Jewish Home leader Naftali Bennett near a central Tel Aviv shopping mall was defaced.

In a stinging slapdown
of Netanyahu on Sunday, Central Elections Committee Chairman Elyakim Rubinstein ruled that the press conference announcing the appointment of popular Likud politician Moshe Kahlon to chairmanship of the Israel Land Administration could not be broadcast.

Rubinstein explained that an appointment of this kind two days before the election, was an unacceptable campaign gimmick, Ynet reported. The Labor party demanded that the appointment be cancelled, contending it was illegal during an election campaign.

He added that Netanyahu asked him to complete the reformation of the ILA in order to release more state land for housing projects to drive prices down.

In another instance of the overheated campaign atmosphere, Jewish Home candidate Jeremy Gimpel defended himself against accusations of extremism on Sunday, after a 2011 video clip in which he spoke about Har Habayis being “blown up” was released in the media over the weekend.

“Imagine today if the golden dome, I’m being recorded so I can’t say blown up, but let’s say it was blown up, right, and we laid the cornerstone of the Temple in Jerusalem. Can you imagine what would be? None of you would be here. You would be going to Israel. It would be incredible.”

The American-born 14th candidate on the Jewish Home list was addressing a group of Christian Zionists in Florida.

On Sunday, Gimpel maintained that the quote was a “parody of the fanatics that want to blow up the Temple Mount. Of course I am against this.” He dismissed Tzipi Livni’s Movement party’s call for him to be disqualified from the election for inciting racism as “media spin.”