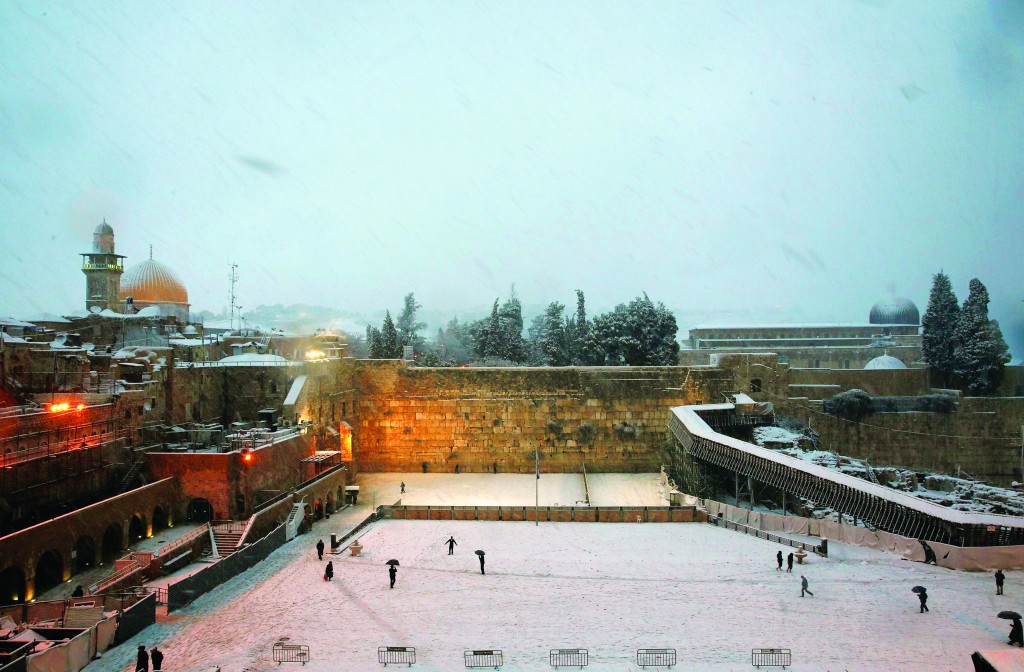 While snow had been predicted, it had not been predicted in such quantity. The 4 to 6 inches of snow accumulated in the city center and more in outlying areas was the most Yerushalayim has seen at one time since 1992.

The children of Yerushalayim woke up on Thursday to a miracle within a miracle: No school. And more snow than any of them had ever seen in person in their lives. Indeed, many had never before seen such strange white stuff coming down from out of the skies.

But despite their inexperience with this meterological phenomenon, no one seemed to have any difficulty in knowing what to do with it.

They quickly demonstrated that the art of making snowballs and snowmen and related activities are not limited to North America and Europe.

They trampled through the fresh powder, hurled snowballs at each other, their parents and everything in sight. Although sleds and toboggans are somewhat scarce in Israel, many kids improvised various kinds of plastic bags for use as sleds. One winter aficionado even cross-country skied through the fresh snow in Sacher Park, according to The Jerusalem Post.

For once, building in Yerushalayim, Yehudah and Shomron provoked no international condemnations. Even the European Union, it seems, can tolerate Israelis building snowmen.

President Shimon Peres was the highest-ranking snowman builder, with help from his bodyguards, outside his residence in the capital.

Israeli Prime Minister Binyamin Netanyahu was seen having a snowball fight with family and friends. Political analysts were mum on whether the storm would help or hurt his re-election prospects.

In public places, the day looked like one giant photo-op as Israelis from all over the country and tourists from abroad took pictures of each other against backgrounds of white.

Yerushalayim’s Sacher Park, a popular snow destination, was full of people from 7 a.m. until evening, despite freezing temperatures. People strolled through, played in, and in some cases just stood and beheld the amazing scene that had come to their city. Free of charge, free of politics.

Eventually, of course, the snow was trampled into slush and mud, and in that respect snow in Yerushalayim is no different from any other big city.

The Schwartz family from the northern coastal city of Pardes Hannah made their way into Yerushalayim on Highway 443, just moments before it was closed to traffic because of hazardous conditions. By 9 a.m., they had built a six-foot-tall snowman in Sacher Park.

“We’ve seen snow before, but we’ve never seen this much,” Michal Schwartz, 16, told The Jerusalem Post, as she tried to shoo away a dog from the base of their snowman.

In Independence Park, the Hajij family built an enormous igloo — sans roof — that accomodated their entire six-member family inside.

Despite much-publicized preparations, the municipality, which rarely has to cope with this kind of weather, had to acknowledge that the capital was pretty much closed down on Thursday morning. Motorists were asked to stay off the icy roads, at least until Thursday afternoon when milder weather was expected to ease driving conditions. Bus service partially resumed and was free of charge as an incentive to keep private vehicles off the roads.

Ahmad, a cab driver from eastern Yerushalayim, told the Post that business was not very good, as most people were heeding official pleas to avoid traveling, a sentiment he supported. “Anyone that is out on the roads is endangering his life and endangering everyone else’s life,” he said. “Today is not a day for work, today is a day for fun and being with your family.”

The city is still trying to recover. Work crews have been busy clearing more than 700 trees that were felled by the storm. That was in Yerushalayim alone; thousands more were brought down elsewhere in the country.

However, according to Elisha Peleg, the City Councilman in charge of emergency service, there were no serious injuries.

The snow and rain that falls on the Jews of Yerushalayim falls on the Arabs and Palestinians too. The Palestinian news agency Ma’an reported that many of the tunnels under Gaza’s border with Egypt were flooded or collapsed, according to an Egyptian security official.

The underground trade has halted during the stormy weather due to concern that many tunnels remain unstable, the official in Egyptian Rafah said.

Not all the snow-related activity was playful. IDF troops needed crowd-control measures to disperse Palestinians hurling rocks at Israeli cars stranded in the snow between Gush Etzion and Chevron. One man sustained light injuries, Ynet reported.

Also on Thursday, a giant orange sea turtle was swept by the Mediterranean’s turbulent waves into the Chadera Orot Rabin power station at about midday, the Israel Electric Company said.

The turtle, measuring 31 inches by 20 inches, did not survive the journey.

Due to the storm conditions, the IEC also said it had suspended coal-unloading operations from ships temporarily in the Chadera station, but that this had no impact on the supply of electricity. The Chadera power station is Israel’s largest.

In Ashdod, heavy seas caused a cargo ship’s mooring line to break, sending the ship adrift in the direction of another freighter anchored nearby. At the last minute, the ship’s pilot managed to steer the vessel out of the harbor.

Though an accident was averted, 26 containers, out of 4,000 the ship was carrying, dropped into the water, including containers of bullets and caps of various weapons. The ammunition poses no danger, and five of the 26 containers have already been washed ashore, Ynet reported.