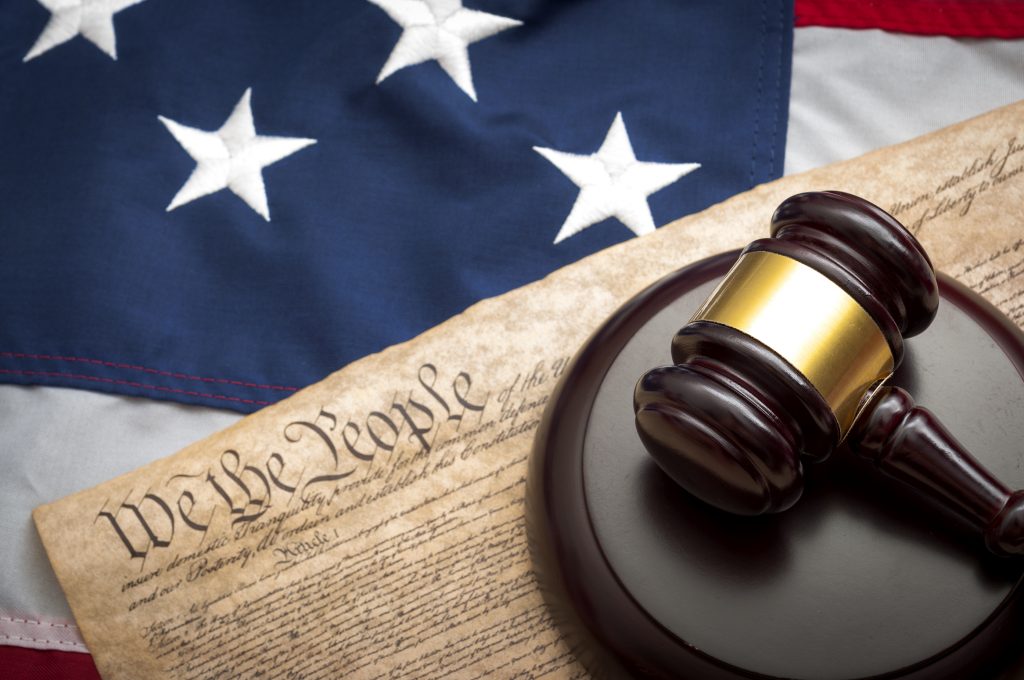 The universal nature of the coronavirus pandemic has left no sector unaffected by its tsunami-strength ripple effect. As nonessential businesses and gatherings were banned some two months ago, houses of worship of all faiths shuttered their doors as part of a national effort to blunt the virus’ spread.

True to the phrase that “necessity is the mother of invention,” groups sought a wide range of ways to continue communal religious life, even under a mandated regime of social distancing.

While those that met via remote options or in spread out, low-key locations attracted little attention, around the country, government crackdowns on churches running “drive-in” services or prayer groups of 10 parishioners or less have led to a growing number of lawsuits claiming that aspects of lockdown orders and their enforcement ran afoul of the Constitution’s First Amendment protections.

The phenomenon has gained some high-profile attention. After a church filed a lawsuit against the city of Greenville, Mississippi, for a ban against drive-in services, the case was supported by a statement of interest from the federal Department of Justice.

“Even in times of emergency, when reasonable and temporary restrictions are placed on rights, the First Amendment and federal statutory law prohibit discrimination against religious institutions and religious believers,” said Attorney General William Barr in a statement that accompanied the legal action.

Greenville’s ban has since been lifted, and drive-in worship is up and rolling. Yet many other cases remain in the courts, like that of a New Jersey priest who claims his attempts to conduct services for groups of 10 at a time were targeted by local police while other secular gatherings were ignored.

Michael McConnell, a professor of constitutional law at Stanford University, and former judge on the U.S. Court of Appeals for the Tenth Circuit, who has lectured and written extensively on matters of religious liberty, said that as the national quarantine continues, many such cases have merit.

“I’m glad that there were not many cases at the beginning of this epidemic, when authorities were justified in using a sledgehammer to shut the country down and leave the details to figure out later, but as it wears on and lockdowns persist, and government becomes more nuanced in its restrictions, I think it’s necessary that questions of where religious worship fits in should get some attention,” he said.

Professor McConnell said that while officials still have latitude in how to exercise their responsibility to protect public health, it was incumbent on them to ensure that religious practice was afforded no more restrictive treatment than secular counterparts.

“It’s not legitimate for mayors and governors to say that religious worship is not important and thereby not essential, to treat it like a hobby, something voluntary, while liquor stores and hardware stores, and government itself proceed to function… and at the same time demanding that houses of worship’s risk level has to be reduced to zero, because they’re not seen as having a social benefit,” he said. “Ultimately, the only legitimate analysis of whether this is being done fairly is to ask whether the religious activity in question is comparable in terms of the public health risk it presents. I’m not saying that if a hardware store can have three customers at a time, you have to allow religious worship of 1,000 people; my point is that if 50 people can be in a store with masks and social distancing, we would have to hear from medical experts as to whether letting people worship that way really presents more risk.”

Since laws like the Religious Freedom Restoration Act (RFRA), and a good deal of legal precedent in First Amendment cases, require government to take the “least restrictive means” when even neutral laws such as broad stay-at-home orders conflict with religious practice, Professor McConnell feels that the bar for closing down public worship should ideally be set even higher than that applied to secular activities.

Michael A. Helfand, a professor at Pepperdine University’s School of Law, with an expertise in religious liberty, said that cases where religious practitioners would be able to show that they were treated unfairly would be most likely to succeed in the courts.

“If there is targeted enforcement or a decision made that implies government makes exceptions for other things and not religious practice, that could show some level of bias,” he said.

The nature of the ongoing crisis has handed government the task of determining which businesses and institutions qualify as essential and which are non-essential. While grocery stores and pharmacies easily make the “essential” list, some choices, such as liquor stores, have led many to question why houses of worship or any of a host of other establishments which some might see as high-priority, have not made the cut.

“It’s not so clear what we are supposed to be comparing houses of worship to,” said Professor Helfand. “Is it like a liquor store and was just left out, or is it in a totally different category of things that government has not yet opened, in which case there is no real way to show discrimination. You would just say, the sporting arena is closed and so is the shul, but it’s not so obvious how to draw these lines, and does not lend itself to applying the types of judgments we are used to.”

While the past two months of the crisis have seen a very large swath of institutions closed and total bans on events of any size, states have begun to open up at varying speeds, following some form of a phased process, a move that could lead to even more such lawsuits from religious groups.

“The more opening up there is, the stronger an argument there will be for religious services to be permitted, and the stronger legal case they will have to make if they are getting left behind,” said Professor McConnell. “This might be especially important when it comes to minority faiths with practices that are unique and that officials might not have thorough knowledge or appreciation for, which I assume would be the case with aspects of Orthodox Judaism.”

While it is debatable whether the large funeral in Williamsburg that prompted New York City Mayor Bill de Blasio’s controversial warning to the “Jewish community” are comparable to the broader legal questions being discussed, they were treated as such by several national voices, among them Senator Ted Cruz, who warned the DOJ to look out for discrimination against Jewish practice in New York.

First Liberty, a religious liberty law firm, offered to represent on a pro bono basis any New York City police officer who was disciplined for following what it termed the Mayor’s “unlawful and immoral order,” a reference to threats of shutting down religious gatherings that did not conform to social distancing guidelines.

While he felt that several of the ongoing cases raised legitimate legal question, Professor Helfand was skeptical that many would win the sympathy of judges.

“There’s a sense that government is doing its best to exercise their best judgment in an emergency the likes of which we have not seen in a long time, and that their actions are motivated by a sincere desire to protect the public and save lives. Given that framework, it seems unlikely that they will be successful unless they can show that they were clearly targeted,” he said.

Moreover, despite his robust support for high standards of protection for religious exercise, Professor Helfand feared that faith organizations being too quick to run to court during the crisis could ultimately hurt the cause they are trying to strengthen.

“In the absence of clear discrimination, I do not think this is the time to be filing lawsuits,” he said. “This could make American society increasingly skeptical about religious liberty as a doctrine, that, without limits, begins to present real dangers, which is not helpful in the long run.”n