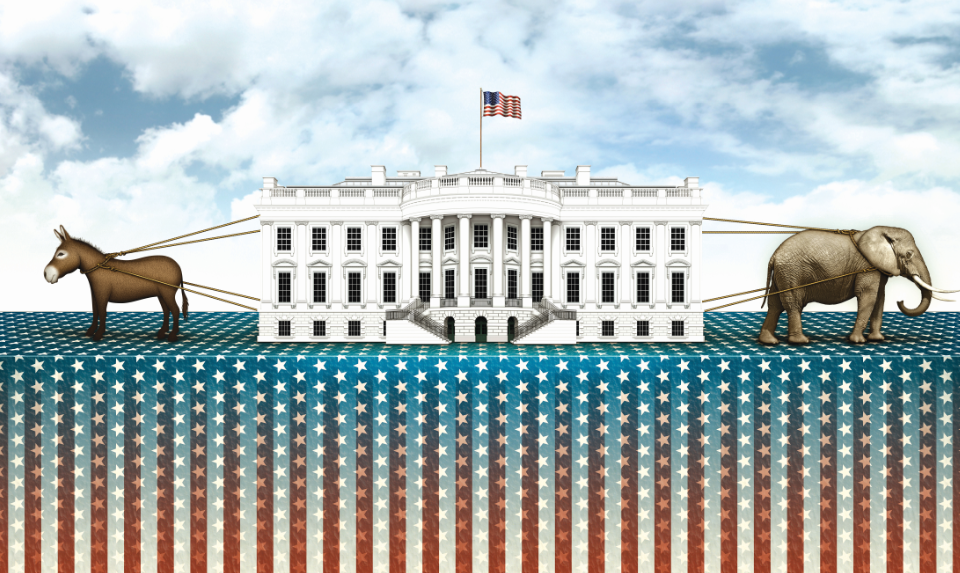 “However [parties] may now and then answer popular ends, they are likely in the course of time and things, to become potent engines, by which cunning, ambitious, and unprincipled men will be enabled to subvert the power of the people and to usurp for themselves the reins of government, destroying afterwards the very engines which have lifted them to unjust dominion.”

Is America’s two-party system the best solution? Or is it a nightmare come true?

In America, in a consistent cycle, two parties have been there, flourishing as engines of economic and social advancement, or fading away, unable to confront the issues of the day, while another party rose from its ashes.

Why a two-party system? Possibly because a two-party system is generally considered to be more stable and moderate, because politicians need to appeal to as many voters as possible. Also, because there are only two parties that need to agree and share power, there is less risk of any deals collapsing due to factionalism.

There are several theories directly related to America’s voting system. In America, the winner of the plurality of the votes wins all, while in other countries, the outcome is representational to the percentage of votes won. In the United States, the party with 55% of the votes wins 100% of the representation. If there’s less than a 50-50 chance of winning, it is unlikely any third party can make inroads, and therefore they are less likely to gain support from voters, who want their votes to count.

No third party has ever gained even 30% in a presidential election. The closest a third party came to the Oval Office was in 1912, when former President Theodore Roosevelt ran for a third term on the “Bull Moose Party” platform. Roosevelt received 27.4% of the vote.

In order to gain representation, often smaller parties will merge together in order to be large enough to challenge powerful parties, which is part of the reason why there are only two major parties, but within those parties there is a wide range of factions and political beliefs.

The second theory is similar to the winner-takes-all model, but hinges on America’s unique method for presidential elections: The Electoral College. In order to become President, a candidate has to win 270 votes, a majority of the College’s 538 votes. If there were more parties, the College would possibly be split and then no one would have enough votes to become President.

The American government is the oldest and most successful two-party system of democracy in the world, but it was not intended that way.

The Founding Fathers worried that competing political parties would undermine democracy; voters would vote for what was best for their party, not the country as a whole, and enable unscrupulous politicians to play on people’s fears in order to enrich themselves, rather than safeguard democracy. Washington had tried to discourage factionalism by having a variety of viewpoints in his Cabinet, but it was too late. By the time Washington left office, there were already two parties hurling insults at each other. In fact, part of the reason he stepped down was that he was exhausted by them.

Initially, there were the Federalists and the Democratic-Republicans. The Federalists were primarily from cities, the professional class of merchants and businessmen, and the North, and favored a strong central government and ambitious financial programs, such as those promoted by Alexander Hamilton, Washington’s Secretary of the Treasury. The Democratic-Republicans were mostly Southerners, farmers and plantation owners, who believed in localized state governments and were represented by James Madison and Thomas Jefferson, who was Washington’s Secretary of State.

When Jefferson won the presidency, he purged Federalists from the government and the party never regained power. By the War of 1812, the Federalists were no more.

But within a few decades, two parties were once again on the seesaw of political power — Andrew Jackson’s Democratic Party emerged from the collapse of the Democratic-Republicans in the 1830s, and the Whig Party came about in response to Jackson.

Jackson’s Democrats were in favor of expanding the country further west, reforming the banks, laissez-faire economics, and expanding voting so that all adult white men could vote, regardless if they owned property or not. The bolstering of the common folk over the political elite was popular, but the deliberate animosity toward long-serving federal officials ended up filling the government with party loyalists and encouraged a system of favors and corruption. Jacksonian Democrats’s base consisted of farmers and settlers, and people from all classes who mistrusted the perceived political elite.

The Whig Party advocated for strong federal policies to bolster economic progress, such as funding for infrastructure, protective tariffs, and a national bank. They advocated for a more stringent naturalization process, and opposed relentless western expansionism. They were in favor of public schools and colleges to encourage upward mobility, and the famous education reformer Horace Mann was a Whig member. The Whigs drew their support from the emerging middle class, professionals, and urban centers.

But soon enough both parties, unable to respond to the urgent political and moral issue of slavery, faded away in favor of parties who made the issue a central part of their platform. Jacksonian Democrats lost their place as the motivating ideology in the Democrat Party, while the Whigs collapsed and what remained united with several anti-slavery political movements to create the Republican party in 1854.

The two-party system we know today was firmly in place, but the party’s causes and base of supporters were dramatically different in the mid-19th century. Then, the Democrats were the party of the South, and were dragged down by their slave-supporting Southern supporters, while the Republicans were vociforously anti-slavery. With Abraham Lincoln, the first Republican President, guiding the nation during the Civil War, slavery was decisively abolished and the country was preserved. Both parties were similar economically, favoring business and entrepreneurship. They diverged in relatively minor ways; Democrats opposed high taxes and tariffs while passing legislation protecting workers rights, while the Republicans favored high tariffs and a gold standard, and became increasingly aligned with big business. Socially, Republicans fought for civil rights for African-Americans, while Democrat politicians often upheld racist laws. In the South, racist white Democrats dominated, while Republicans held power in the Northeast.

Dramatic shifts began in the 20th century, when Democrats grew increasingly liberal and Republicans shifted dramatically to the right.

The two parties have moved so far apart that it is unlikely they will see eye to eye again any time soon, to the dismay of the majority of Americans. As of 2020, amidst the fever pitch of partisanship, a Gallup poll revealed that roughly four in ten Americans identify as politically independent, and a year ago, a Wall Street Journal poll found nearly 40% of Americans, including 62% of independents, believe the country needs a new party, and roughly half of Americans think the current political system needs serious changes. Will Democrats and Republicans be so tied together in a spiral of animosity that another party emerges? Will frustrated Americans who do not see themselves being represented find another party to replace one or both parties currently on the national stage? Or will the parties themselves change in response to the times? If so, they should hurry. Americans are increasingly running out of patience for anything but a dramatic solution. Some are even turning to the model the United States had decisively rejected in the American revolution: England’s multi-party parliament.

England has a long tradition of legislative governing bodies, dating back hundreds of years to the nobles who gathered to advise the Saxon kings. By the time of William the Conqueror, royalty would have a council of respected nobles who would advise the monarch on the law. In 1215, his great-great-grandson King John was forced by his nobles to sign Magna Carta, which formalized the need for a royal council to permit the king to collect taxes. The powers of this so-called Great Council were further increased by Simon de Montfort in the time of Henry III. This is the origin of the House of Lords, Parliament’s upper chamber.

In parallel with this, the Anglo-Saxon county moots, which included representatives of each village, developed into another council, which by 1327 had become a permanent part of Parliament. From 1332, this gathering was known as the House of Commons, the lower house of parliament.

Because of its long history and the many former British colonies who have modeled their general assemblies after Britain’s, the British Parliament is known as the ‘‘Mother of Parliaments.” 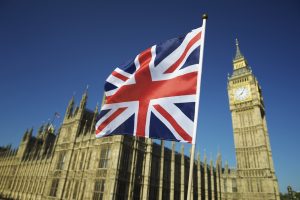 The U.K. Parliament has three parts:

The House of Commons – 650 elected Members of Parliament (MPs)) representing political parties or sitting as independents. Each MP represents a local constituency, which has roughly the same number of voters.

The House of Lords – 92 hereditary peers, 26 archbishops and bishops and the majority life peers – experts in a field who have contributed to public life and who bring their experience and knowledge to the Lords. There are a number of Jewish lords, including the former Chief Rabbi Lord Jonathan Sacks, who was enobled in 2009. His predecessor Chief Rabbi Jakobovits, zt”l, was also raised to the Lords.

The Queen. As head of state Queen Elizabeth II has a mostly ceremonial role – opening and dissolving Parliament, and also giving the Royal Assent, which puts the final seal on an Act of Parliament, enabling it to become law. This is a formality these days. The Queen remains neutral on politics, but maintains a keen interest and involvement, meeting every week with the Prime Minister, and offering advice. Since she has reigned for such a long time (since 1952) she has seen 14 Prime Ministers in office, and so her advice is taken very seriously.

Scotland, Wales, and Northern Island additionally have their own legislative bodies over matters of agriculture, education, housing, and transportation, but the House of Commons has control over financial and economic issues.

While this generally means that there is a stable Government with a quick change of administration, opponents say that some people are effectively disenfranchised both because it is difficult to dislodge an MP from a so-called safe seat, so their vote has little impact, and because the composition of the House of Commons does not reflect the proportion of votes cast for each party.

Though the American two-party system is embroiled in fierce political bickering, it was not always that way. For hundreds of years, this system has been successful, and allowed the United States to become one of the largest and most powerful nations in the world. Though a much more stable multiparty system such as the one in Britain may be appealing, Americans should not be so quick to discard the system that has served them well up until relatively recently.

However, there is another peculiarity of the British political system that may ease America’s political system. In order to ensure all citizens have equal representation in government, the United States should adopt Britain’s system of proportional representation, in which each constituency is required to be within 5% of a certain number of voting citizens.

Though that would likely require vastly expanding the House of Representatives, it would ensure that all politicians represent a roughly similar number of constituents. There would no longer be situations where a congressman from populous Texas is responsible for nearly 900,000 citizens while the congresswoman from Wyoming represents fewer than 600,000 — a difference of 300,000, and yet they both have equal sway in the House. If each representative was assigned an equal number of people, and districts were drawn to reflect that, we could be confident each person had, via their elected official, a proportional representational say in the halls of power.

If citizens are assured their vote is accurately reflected in Congress, and their representative is not more preoccupied with thousands of more constituents than the next representative, there could be less dissatisfaction toward the process of politics.