Prime If I Can Do it, They Can Do it 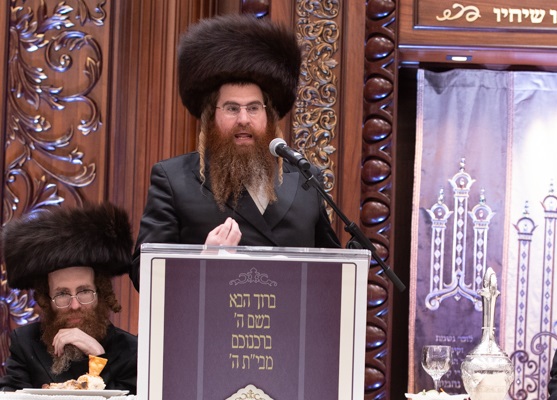 B’ram — Indeed, Yehoshua ben Gamla’s name should be honored, for were it not for him, Torah would have been forgotten from Klal Yisrael (Bava Basra, 21a).

The Gemara explains that Yehoshua ben Gamla established a system to educate each and every Jewish child and so, the light of Torah continued to burn for our nation.

In A Blaze in the Darkening Gloom: The Life of Harav Meir Shapiro, Harav Yehoshua Baumel, Hy”d, wrote that while collecting funds in America to establish Yeshiva Chachmei Lublin, Rav Shapiro delivered 242 drashos. He notes that the word b’ram has the numerical equivalence of 242, apropos of his founding Yeshiva Chachmei Lublin and Daf Yomi. One might justifiably say Rav Meir Shapiro, too, was responsible for the continuity of Torah in Klal Yisrael. How fitting is it then for tinokos shel beis rabban to increase their own learning in advance of the 13th conclusion of Rav Meir’s Daf Yomi.

Rabbi Leibish Lish brings a history, both familial and personal, to the upcoming Siyum HaShas. As he prepares for the Masmidei HaSiyum presentation at the 13th Siyum HaShas, he shared with Hamodia his life journey in which he overcame much adversity on his way to inspiring thousands of children worldwide to raise their own level of limud haTorah in preparation for this momentous occasion.

Rabbi Lish, indeed, considers himself a third generation Daf Yomi associate. His paternal grandfather and namesake, Reb Leibish Lisz, zt”l, known in Yeshiva Chachmei Lublin as Reb Leibish Tishovitzer, enjoyed a close relationship with Harav Meir Shapiro, zt”l. In time, he married the daughter of the Rav of Tzozmir (Sandomierz), Poland, where he was expected to eventually take over the rabbanus from his father-in-law.

Reb Leibish Lisz miraculously survived WWII and made his way to the United States. He was the first one to deliver a Daf Yomi shiur in Boro Park and, together with Harav Avrumche Shapiro, zt”l (brother of Rav Meir), they were very active in spreading the concept of Daf Yomi on these shores. They gathered survivors, especially from Yeshiva Chachmei Lublin, and established Vaad Ha’olami L’hafatzas Daf Yomi, which strove to broaden the appeal of lomdei haDaf throughout the country. Eventually he joined forces with Rabbi Chatzkel Besser, z”l, of Agudas Yisrael, and the Agudah absorbed the work of the Vaad, which successfully expanded the study of Daf Yomi exponentially.

Rav Lisz was a pioneer in recording Daf Yomi shiurim, using what was then considered the up-to-date wire reel technology to record shiurim. Eventually, when reel-to-reel equipment and cassettes were developed, the newer devices were used to record the shiurim. Hagaon Harav Moshe Feinstein, zt”l, lauded the project as “a righteous undertaking,” and other luminaries, including Harav Yaakov Kamenetsky, the Debriciner Rav and the Novominsker Rebbe, zecher tzaddikim livrachah, added their approbations.

After Rav Lisz’s passing on 17 Iyar 5739/May 14, 1979, his son Harav Yisrael Ber Lish, zt”l, continued his father’s work, recording the entire Shas both in English and in Yiddish. Rav Yisrael Ber’s young son, Leibish, remembers the aura in his home concerning Rav Meir Shapiro and Daf Yomi. “My father, zt”l, was Menahel of Skverer Mesivta, and he set up a quasi-recording studio in our basement. Some of my sweetest childhood memories are of my father recording his shiurim late at night or at 5:00 a.m., when it was quiet in the house. On occasion, he had to record during the time we were awake. We were well aware of the need for silence during his recording sessions, so we made sure to maintain silence whenever he needed to record while we were awake.”

Tragedy struck in Adar 5749/1989 when Rav Yisrael Ber was niftar suddenly at the age of 35. “I was only eight years old at the time,” says Rabbi Leibish Lish, “and I faced massive challenges during my subsequent formative years. Being a yasom cannot be easy, and with the limited resources available at the time, my behavior did not conform to the standard expectations of chadarim.

“Although there were people who tried to work with me and set me on a straight path, my response was not suitable. Unfortunately, many were meya’eish, they gave up hope of ever bringing me back to where I should be. I was uncontrollable and bounced from yeshivah to yeshivah, attending five different ones over the years. I was even sent to Eretz Yisrael with the hope that the change would be beneficial for me. It was a sad situation, but I was all alone.

“Eventually, I was able to turn things around. The watershed moment in my life was when I took the advice of Rabi Yehoshua ben Prachya, who says in Avos (1:6), ‘Asei lecha Rav — make a Rebbi for yourself.’ I became close with Harav Mottel Silber, shlita, of Toldos Yehudah-Stuchin, and from that point forward I [didn’t and still] don’t do anything without consulting with him.”

Today, Rabbi Lish, a fifth-grade Rebbi in Yeshiva Karlin-Stolin in Boro Park, is dedicated to helping guide children in their own daily challenges. He brings a message of hope and accomplishment to Yiddish-speaking children through the seven books he authored and the thousands of CDs he helped produce.

One of the projects closest to his heart is spending time and speaking with yesomim who need his encouragement and advice. “Often, I visit the homes of these families during the shivah, where I can empathize with the children and give them chizuk. I tell them the importance of asei lecha Rav, how they must create a bond with someone who will guide and inspire them going forward.”

Recently, Rabbi Lish joined a Shabbaton that was arranged for over 100 yesomim. “I told the children my life story, and how I faced insurmountable challenges along the way. For half an hour, they listened intently as I retold the ups and downs, or rather mainly the downs, of my journey. Yet despite all the tough times, I was able to persevere, and I was able to make a successful life for myself and to help others. The children were greatly encouraged and, at the end, they gave me a standing ovation.”

The accompanying document, written inn Iyar, 5733, describes how several talmidim of Rav Meir Shapiro at Yeshiva Chachmei Lublin met at a simchah of one of there colleagues. A discussion ensued concerning establishing a memorial for their Rebbi, who did not leave over any offspring. These talmidim included Rav Leibish Lish, Rav Dovid Mandelbaum and Reb Avraham Dovid Gelbfish, z”l.

Several initiatives were planned to venerate their Rosh Yeshiva. The suggestions included strengthening the learning of Daf Yomi established by Rav Meir Shapiro, included forming new Daf Yomi shiurim, supplying Magidei Shiurim for any group that requests one, producing and distributing taped recordings of the Daf Yomi, and celebrating the Siyum of the masechtos in a public manner which would encourage others to join.

.
Other projects, including establishing a yeshiva, Kollel and gemilas chessed fund were also suggested.