Prime Is America Sliding Toward Socialism? 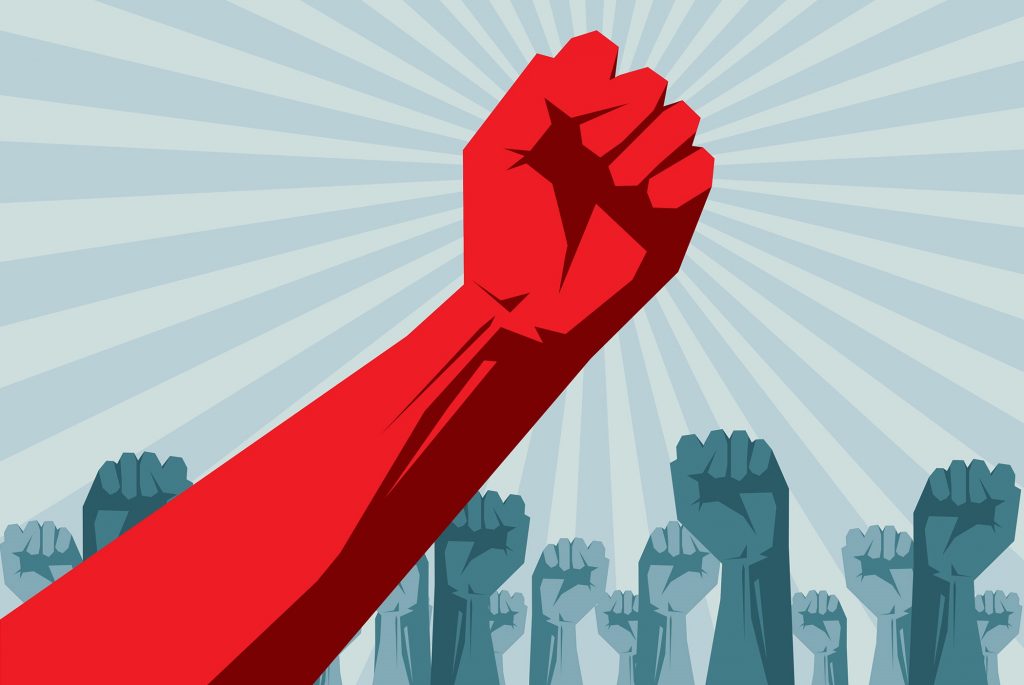 Not all that long ago, endorsing the policies of “democratic socialism” would have been political suicide. What happened?

The speaker returned to his home town to launch his first campaign rally in the 2020 race for the presidency, and wasted no time in reminding the audience of his roots.

“You deserve to know where I came from,” he told the diverse group at Brooklyn College. “I did not have a father who gave me millions of dollars to build luxury skyscrapers, casinos and country clubs,” he said. “Living in a family that struggled economically powerfully influenced my life and my values.”

So began the presidential campaign of Sen. Bernie Sanders, an Independent who is a member of the Democratic caucus. Sanders’ platform promotes “Medicare for all,” a system whereby every American receives free health care, paid for by the government. He also urges that there be no undergraduate tuition or fees at public colleges and universities. And he supports a version of a plan called “Green New Deal,” legislation proposed in February of this year by New York Rep. Alexandria Ocasio-Cortez and Massachusetts Sen. Edward Markey, that would result in a drastic overhaul of the U.S. economy, with the goal of eliminating greenhouse gas emissions, which some believe cause climate change.

The combined cost of these programs reaches well into the trillions of dollars. Where would all the money come from to fund them? Simple, explains Sanders, himself a millionaire. Free college tuition is possible by raising taxes on all stock and bond trades. As for the other expensive policies he supports, funding those, too, is simple in Sanders’ eyes. In a CNN town hall this past February he described income inequality in America and concluded by saying, “Am I going to demand that the wealthy and large corporations start paying their fair share of taxes? [Darned] right I will.”

Not all that long ago, endorsing the policies of “democratic socialism” that Sanders and others campaigning for the Democratic nomination in the 2020 campaign now proudly promote would have been political suicide. But is that still the case? Since the 2016 election, these policies have become more acceptable and in some circles even fashionable. In fact, these socialist ideas have become mainstream among many.

Sanders’ views in particular and socialism in general appear to be gaining traction among the general population. Consider the results of these recent polls:

This wide acceptance of “some form of socialism” is a new phenomenon. For decades in the United States, the term socialism carried a lot of negative baggage: It is associated with brutal and repressive regimes in socialist or communist countries, including the Soviet Union, Cuba, East Germany, North Korea, Vietnam, Venezuela and China. Spain and Greece have experimented with this ideology, and have experienced economic turmoil, such as Greece’s restructuring of its EU debt in 2010 and the resultant
belt-tightening.

President Trump made reference to socialism’s economic and political failures in his State of the Union address this year when he condemned the Maduro regime in Venezuela, saying its “socialist policies have turned that nation from being the wealthiest in South America into a state of abject poverty and despair.”

Many people share his opinion, but apparently not as many as in the past. A growing number of Americans, younger people in particular, view socialism not as a problem but as a solution.

The United States is one of the countries that has a capitalist system of government. What does that mean? It means that private individuals or businesses produce goods and services, and own the means to do so. What gets produced and how much items cost are affected by what people want to buy and how much there is of that good or service.

It’s not a perfect system; it can lead to an imbalance of wealth, and it can lead to mistreatment of laborers, not to mention the problem of monopolies edging out smaller competitors. Still, despite its imperfections, capitalism has raised the standard of living of billions of people around the world. It has financed the development and implementation of new technologies and has funded improved agricultural techniques now being used to help feed those billions, to name but a few examples.

How is it, then, that in America, still the center of capitalism, there is a shift toward an ideology that has repeatedly failed in the countries where it has been tried? Why are people from wealthy households supporting sharply higher taxes? Economics, privilege, and debt are all part of the answers to these questions.

“It’s the suburban privileged class that’s championing socialism, not people who were raised in the inner cities or immigrants,” explains Prof. Alan Mond, Deputy Chair of the Department of Political Science at Lander College of Arts & Sciences.

This generation prefers socialism not because they feel guilty about having a privileged background but because they are concerned about economic inequality — their own.

Unlike their predecessors, young people born in the late 20th century and early 21st centuries can’t look forward to getting better jobs than their parents had, buying better homes and being more prosperous than they are, explains Prof. Mond.

They consider not being able to buy items that others have to be fundamentally unfair, he continues. They ask of society, almost demanding, why can’t we have what our parents have? And when Sen. Sanders or other politicians call for policies such as debt forgiveness for student loans and tuition-free college, these strike a responsive chord with them

The socialism they support is not an idealistic view in line with prominent thinkers, but an opportunistic one. “I call it the socialism of free stuff,” Prof. Mond adds.

Whatever the label, increasing materialism, the “need” to purchase $1,000 smart phones, the latest laptops, and take expensive vacations are adding to the financial pressures that this group is experiencing. With limited income and a budget stretched to pay for rent, student loans and everyday expenses, they simply can’t afford these luxurious items and, as a result, some of them are calling for “socialism.”

For political purposes, he explains, liberals are being depicted as socialists, but the unfair labeling goes both ways, as Republicans and conservatives are being called fascists and racists; in the process the number of true-believer socialists is being exaggerated.

In the last election, 62 freshman Democrats were elected to Congress; 59 of them support giving aid to Israel and have not attacked AIPAC; the other three have taken the opposite path. However, the right is focusing a lot of attention on those three, and grouping all of these Democrats as anti-Israel.

According to Prof. Luchins, recent polls don’t gauge people’s true sentiments, so the apparent growing popularity of socialism is misleading. This helps explain why Sanders got millions of votes running on a platform of socialist ideas in 2015-2016, and why many of those voters subsequently supported Donald Trump in 2016. They weren’t really socialists but they felt alienated — betrayed by the elites — and Trump was able to tap into those feelings.

Recent polling data of people who strongly dislike or disapprove of President Trump said they are socialist; their support for Sen. Sanders put him well in front early in the running. However, the day after former Vice President Joe Biden announced his candidacy, support for Sanders dropped from 27% to 12 %. Many of those supporters weren’t really socialists, Prof. Luchins explains. “They just wanted a vehicle to defeat Trump.”

Socialism in the Fabric of American Life

Over the years, Americans from many walks of life and geographic locations have benefitted from ideas and policies that originated in socialism. Among the number of socialist supporters have been many, many Jews.

“Our country has embraced certain aspects of socialist philosophy,” says Prof. Luchins, “and Jews were the strongest supporters of socialism in this country. Those policies have always had a large proportion of Jewish supporters, and have always been popular among Jews.”

In the early 1900s, there was some interest in actual socialism in America. Political activist Eugene V. Debs ran as the socialist candidate for president five times. (However, he never received more than six percent of the vote, and even that only once. In the entire country there was only one district he carried — the Lower East Side, which at that time was nearly entirely Jewish. )

Consider the following: The labor movement itself was a form of socialism, and so were many of the ideas it supported, including some that we take for granted today like Social Security. Food stamps, Section 8 and school vouchers also align with socialist philosophy.

Another icon of American polititics, former New York Senator Pat Moynihan, used to say that the most socialist thing in America is public schools; he called them government schools. LBJ’s vice president Hubert Humphrey said about Socialist Party candidate Norman Thomas, who ran for president six times, that he died of a broken heart because both major parties stole his platform.

While Americans may want some socialist policies, they don’t want the extremes that are created in the name of socialism. Lee Edwards wrote for the Heritage Foundation in 2018, “Would seven percent of millennials declare their willingness to live under [socialism] if they knew the real costs … as practiced in some 40 nations over the past century — the denial of free speech, a free press, and free assembly, the imprisonment and execution of dissidents, no free and open elections, no independent judiciary or rule of law, … dictatorship, in all matters and on all occasions?”

Notes Prof. Mond, “Sen. Sanders talks about raising people’s economic standards — he’s become the champion of that. Traditionally, Americans have done that by creating good jobs, not by just raising the salaries for jobs that are marginal. The innovation that’s needed in our era does not come from a socialist society, because socialism as a value system reduces or minimizes competition.”

In that environment, there would be no incentive for a Michael Dell to sit in a garage and build a computer, or for Bill Gates to develop Windows, because they would not be rewarded for their efforts.

“The ultimate shortcoming of socialism and communism is that it doesn’t recognize the competitive spirit and the importance of competition as a motivator of human behavior,” Prof. Mond adds.

For whatever the reason, socialists seem to ignore the logic of this point.

Sen. Sanders promotes an “Economic Bill of Rights,” that it is a person’s fundamental right to have a job that pays a living wage, quality health care, a complete education, affordable housing, a clean environment and a secure retirement — everything — no matter how little one produces.

Curiously, these are the same promises Hugo Chavez made to Venezuelans. And those promises did not end well. Whether Sanders becomes the Democratic nominee or not, President Trump will very likely use these proposals and others like them to portray the Democrats as being too far to the left for mainstream Americans.

“We’re no closer to socialism today than we were at any point in the last half century,” says Prof. Luchins. For those who were feeling uneasy from recent poll results, those words are reassuring.