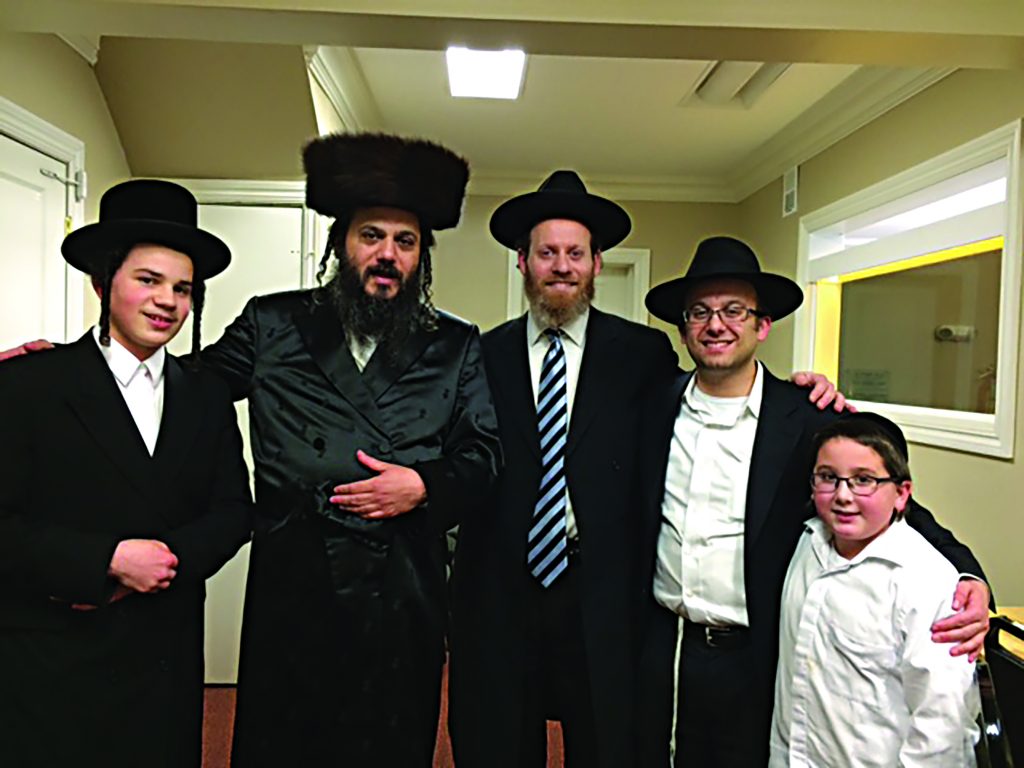 Jewish outreach is a noble pursuit one might think is exclusive to kiruv professionals. But according to Rabbi Aharon Pessin, we all ought to be involved with kiruv — and be mekarev ourselves first. Rabbi Pessin believes, “When you are mekarev yourself, hopefully you will be able to influence others — family members — and then it spreads… If you have a Shabbos table, you are a kiruv professional; inviting someone to your Shabbos table is all you need to do.”

While Rabbi Aharon Pessin was recently in the States, lecturing in venues as diverse as the Rabbinical Alliance of America (Igud HaRabbonim) and Manhattan’s Lenox Hill Hospital, I had the pleasure of interviewing him before his return to Ramat Beit Shemesh. The dynamic speaker, prolific author of 20 sefarim, and popular maggid shiur feels the biggest zechus he has is being connected to Gedolei Yisrael. He is a talmid of Hageonim, shlita, Maran Harav Chaim Kanievsky, Harav Asher Weiss, Harav Avigdor Nebenzahl, and, lbcl”c, Harav Ephraim Greenblatt, zt”l. Having worked in the Jewish outreach field for many years, Rabbi Pessin shares his insights with Inyan.

How are you involved in kiruv?

I had the zechus to be involved in Birthright; I gave some shiurim for Aish HaTorah in New York and Ner LeElef in Israel; and, baruch Hashem, for years, a lot of people have come to our house — some affiliated, some not.

I have a website that presently has 17,000 shiurim online in both Hebrew and English. It is unique in that 99 percent of these shiurim are one to two minutes long. Among those who receive a daily link to these shiurim are chashuve Rabbanim who use them in their drashos, many baalei teshuvah, and everybody in between. Within these 90 seconds, I have to say something to inspire — a thought of the day, something to share at the Shabbos table, a story from tzaddikim, a pilpul halachah, mussar or hashkafah — something to take with you. There are many ways today one can be affiliated with kiruv.

What do you advise those who want to participate in the kiruv effort but do not have the koach or skills to speak in public?

Supporting kiruv organizations and writing sefarim are ways one can be mekarev people. One who doesn’t do kiruv is, in essence, saying, “I really don’t care about my brother or sister.” We are all united. We love to put people in different categories: “He’s not Orthodox like me.” But he’s Jewish just like you, and that is what unites us and what we need to focus on.

Aish HaTorah’s Project Inspire is an effort to get laypeople involved in kiruv, and I think it is a great idea. If you have a Shabbos table, you are a kiruv professional; inviting someone to your Shabbos table is all you need to do. If they see how you conduct your Shabbos table, the weekly atmosphere around the table, the zemiros and one or two divrei Torah — which can even be very simple thoughts that you heard or read — the way you treat your wife, the way she treats you…

These are things most people do not have in our days. When they see that, they start to be envious and say, “They have something I don’t.” And they start to investigate — “Why is it that I don’t have that?”

What are common hesitations about inviting the unaffiliated to one’s Shabbos table?

They might think they don’t have all the answers to questions their guests may ask, but guess what? I have asked thousands of questions to my Rebbi, Maran Hagaon Harav Chaim Kanievsky, shlita, and I’ve put many of them in my sefarim. But a few times he wrote to me, “I don’t know,” so if you don’t know something, you are in good company. You don’t need to know everything. What you can do is say, “That’s a great question, and I am going to try to find out. When I do — hopefully, I will — I’ll give you a call.” That makes the person feel like a million dollars, and you have a reason why you need to call him on Sunday or Monday. When you do, you tell him, “I called my Rabbi. He said it was a great question; he was so impressed with it, and this is the answer.” Or, you can find the answer through research.

Should the way unaffiliated guests dress and act be a cause for concern, especially if your children are at the table?

That is a great concern and there is no real yes or no answer — it really depends. Consult your local Orthodox Rabbi for guidance regarding whether you should extend the invitation and if so, how. Not everyone should invite specific people to the house if it is going to endanger their families. Chazal say, “Your spiritual life comes first.” You might want to tell your guest in advance, “We have a certain dress code to honor the Shabbos — it’s like a queen; I put on my best attire and I look like I am ready to go to a wedding every single week!” This way, you are taking the focus off the person’s lack of tznius; instead, the focus is on the concept of doing something special in honor of Shabbos.

Can you invite a guest if you know that there is a chance he will drive to your house on Shabbos?

That is a great halachic question. According to most Poskim, if you give the guest the option to stay over and s/he decides not to, there is no problem. You tell the person ahead of time, “I would love for you to stay in my house tonight; you’ll have a great time!” You are not responsible for their driving, according to some opinions; others don’t allow that. However, you cannot invite a guest for lunch on Shabbos knowing s/he may drive, since you are causing the person to drive.

How can those who are observant be mekarev themselves to get more excited about Yiddishkeit?

It’s called shiurim, and we have so many on different subjects every single day all over the world. The purpose of shiurim is to enhance that which we learned years ago in yeshivah. When one sits and learns, that is kiruv — a way that one can be mekarev himself, and then the tzibbur. A person may say, “Kiruv is not for me; it’s just for non-frum people.” But kiruv just means “getting closer.” That is our number-one job — getting closer and clinging to Hakadosh Baruch Hu.

How can those who are not as intellectual grow closer to Hashem?

Attending different Torah events and saying Tehillim are two ways. By saying a passuk that Dovid Hamelech wrote with ruach hakodesh, you are connecting to Hakadosh Baruch Hu and becoming a little closer to Him. Any time that you are not engaged in something that is proactively bringing you closer to Hakadosh Baruch Hu, you are distancing yourself from Him. When you connect, you cling to the Source of eternal life, so who would want to miss the opportunity? Whenever you say a chapter of Tehillim or do a collective mitzvah with others, it is kiddush Hashem. You are connecting and, in essence, you are getting closer.

How can we be mekarev kids who today are referred to as “off the derech”?

If it’s excruciatingly painful to watch a child go off the derech, and thus you shut yourself off and can’t communicate with him, guess what? The kid is never going to come back; there’s no reason for him to come back. It seems these kids are looking for happiness, and there is also the yetzer hara that goes to work — and it does a great job.

If they will find happiness somewhere, they will go there. But if you provide happiness and show warmth and love, they will be able to beat the yetzer hara and come back.

Any other thoughts about kiruv?

In Maseches Yoma (86a), Chazal say that when a person conducts himself the way he is supposed to conduct himself, people look at him in amazement and say, “Praiseworthy are you and your father and your Rebbi who taught you Torah! That’s a beautiful Torah that you have there.” If, chalilah, that person doesn’t, the reverse will happen. They will say, “Stay away from them; stay away from Torah!”

When one greets people on the street and is the first to say hello, it is a way of being mekarev others. Those you greet will realize, “Wow, he’s special!”

We are supposed to be an am kadosh, a holy nation. What does that mean? Harav Samson Raphael Hirsch, zt”l, has a very simple, beautiful definition: separated and elevated. The non-Jew is supposed to view us as a special, elevated people, a light unto the nations, by how we carry ourselves. When you act that way, you are mekarev yourself and everybody else. If you behave like a mentch, you’ve just done kiruv.

Why do you feel it is so important to get close to Gedolei Yisrael?

In closing, can you please share an anecdote about one of your special visits to one of the Gedolei Yisrael?

A sweet baal teshuvah couple from Australia who had been married a few years without children came to Eretz Yisrael on a six-week vacation during which the husband sat and learned in Ohr Somayach. I brought him to Rav Chaim Kanievsky and explained the situation.

I asked Rav Chaim, “This Yid lives very far away, all the way in Australia. If he goes back home and finds out that they are kosher, what do you want him to do next?” Rav Chaim looked at me and said, “Tell him to check the mezuzos.”

We went outside, and I saw Rav Chaim’s Rebbetzin — it was just a few months before she passed away. I told her about the couple’s plight and asked her what they should do. She said, “Tell them to check the mezuzos.” She had no idea what Rav Chaim had told us upstairs.

After about five minutes, the husband told me, “I just realized something. I have four mezuzos but I have seven doors.” I told him that he’d better get three more mezuzos and check those that were already up as well.

He was going to wait until he returned to Australia, weeks later, to have them checked. I said, “What? You are going to wait six weeks when Rav Chaim told you to do something? Call your father and have him bring them to be checked.”

He called me a week later to say that the day after we met at Rav Chaim’s, his Rebbi at Ohr Somayach surprisingly announced that they were going to switch the subject they were learning to hilchos mezuzah for the next week and a half.

Subsequently, he called his father and asked him to get his mezuzos checked; he learnt that two of the four were passul. Three months later, this husband called to say his wife was expecting. A year to the day after we went to Rav Chaim, their baby boy was born.

Tzaddikim have the koach to give brachos that make such an impact in the Upper Worlds! <