Pathways Of The Heavens

Celestial Navigation on the High Seas from Polaris to GPS

Sailors are mostly G-d-fearing, say Chazal. The reason for this is, of course, the omnipresent perils of sea – famine, disease, piracy, and wreckage. But perhaps also because nautical navigators are always gazing upward, keenly attuned to the heavens, ever watching the sun, the stars for guidance. Seamen ride the seas but follow the pathways of the heavens.

To understand how an unfamiliar object in the sky could cause a ship to be lost, we must become a bit more familiar with the how ships used to find their way on the high seas.

Though we may not realize it, man’s entire concept of space and time is inseparably intertwined with celestial phenomena. The stated purpose of creating the Great Illuminators was to “be for signs, and for festivals and for days and years.” A year represents the annual solar cycle and a month represents a complete cycle of the moon’s phases. Hours and minutes are subdivisions of the day, the mean time of the sun’s daily routine.

“The pathways of the heavens are as clear to me as the pathways of Nehardea,” Shmuel, the great Amora, once said. In a way, geography and cartography are actually both astronomy. Remember, Earth is a sphere, there is no top or bottom; you can choose any place on it as your equator or meridian. We have charted out the globe based on astronomical phenomena: the equator is the mean path of the sun, and the poles are the farthest points north and south respectively. The tropics of Cancer and Capricorn are the lines across which these constellations arc in the night sky. 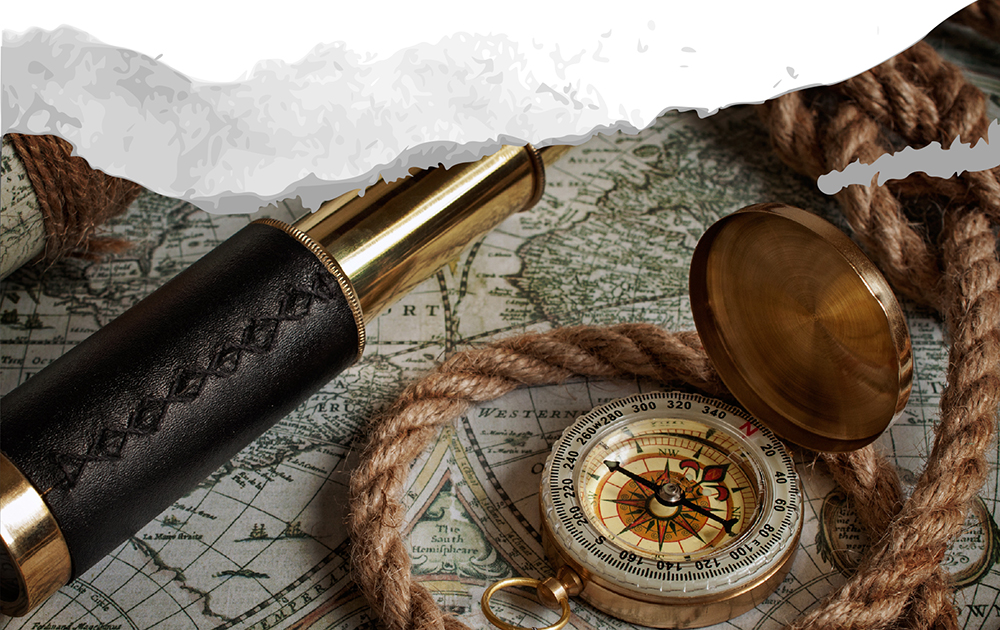 The earliest sailors who explored the civilized world and engaged in international trade always sailed while keeping the shorelines in sight. The seas have no mileposts or landmarks, and ships leave no tracks – getting lost on the high seas is perilously easy and easily perilous. This, obviously, greatly limited man’s range of travel.

The sun, however, is only there by day. During the night, the sun is useless as a navigational tool. But stars are present and can indicate direction in several ways.

However, these techniques only tell the direction you’re facing; you also need to know how far north or south you are.

The premise of celestial navigation is that for any celestial object visible in the sky, there is some place on earth where that object is directly overhead. That is its geographic position. It follows that if you see the sun 15 degrees removed from the zenith, your geographic position is 15 degrees from the sun’s position. By measuring the angular position of the sun, moon and other celestial bodies at the meridian, meaning when they are in the center of their arc in the sky, a navigator can measure his latitude. The angular difference between the celestial object and the zenith is how far the observer is from the sun’s geographic position. The easiest of all heavenly bodies to use for this is Polaris, which has no arc – it is always at its meridian.

This method works anywhere in the Northern Hemisphere (in antiquity, the Southern Hemisphere was not explored by the Eurasian peoples and was thought to be underwater by Ptolemaic geography). Besides the astronomically stationary North Star, there are 57 navigational stars that rise, arc across the night sky and set below horizon, but can be used when clouds obscure the north star.

Ships would sail to the latitude of their port of destination. Then, sailors would position the vessel facing the destination, directly east or west. By keeping Polaris exactly to the right or left they could maintain a straight line. When a comet unexpectedly appeared on the Southern Celestial Hemisphere, Rabban Gamliel’s navigator mistook it for Polaris. Thinking the ship has reversed itself, he turned it around to sail in the opposite direction. A setback like that could have meant starvation, had it not been for Rabi Yehoshua’s foresight.

The Astrolabe and the Sextant

Given the importance of astronomy in antiquity, the astrolabe — which is like a globe, but with planets and stars — was invented for such measurements. The astrolabe was first developed in Greece sometime in the last millennium B.C.E. and was perfected in the Islamic world. The instrument shows the position of the celestial bodies in relation to each other, based on the time of year and hour of day. It can also measure the height of a mountain or a tall structure. The astrolabe was a valuable tool for navigators, surveyors, as well as teachers and students of astronomy, astrologers, and even as a timepiece, as its ubiquity in the Middle Ages attests.

Astrolabes were the gold watches of the Islamic world; every self-respecting man carried one. As Muslims, they had five prayer times per day, including one in the evening and one before dawn, so the astrolabe was indispensable in daily life.

One of the difficulties involved in using the astrolabe was getting a precise angular measurement. Determining the sun’s altitude is difficult, as it involves looking directly at the sun. The most primitive way to measure this was by counting the finger breadths between the zenith and the celestial object. This method is imprecise and prone to error.

Ptolemy, who is considered the father of geography, suggested adding a tool to the astrolabe that measured the angle. A quadrant is an instrument of wood or brass shaped like a quarter circle. It had two sights to align the star with the side of the instrument. The round part of the quadrant is divided into 90 degrees to allow for precise measurements. A plumb bob hung down from the top indicating the distance in degrees the object was from the zenith.

But quadrants are large and unwieldy, and plumb bobs are unreliable at sea because of the rocking of vessels in water. Sextants and octants, as their names suggest, are sixth and eighths of a circle, respectively. Rather than measure from the zenith, sextants compare celestial objects with the horizon, a much better-defined point of measurement. Current sextants use adjustable mirrors to project reflections of the horizon and the stellar object onto an index that measures their angle. When hazy conditions block the horizon, a mercury level creates a horizontal line.

The methods we discussed until now, although quite effective in determining latitude, don’t, in themselves, calculate longitude. The sun circles the earth continuously and constantly from east to west, rising and setting all the time. The farther west we go, the later sunrise will be. Calendars can predict the moment of sunrise at a given place centuries in advance. And, theoretically, by observing sunrise, moonrise or the rise of any star at a certain time, we can infer the longitude of that place. However, to do so, we would need to have an exact time measurement.

With the communication media we have today, it is easy to measure the time difference between different places. We can find out when sunrise is happening in Thailand just by looking at a clock in New York. Once we know that sunrise occurs there exactly twelve hours after it does in New York, we can infer that Bangkok is 180° east (or west) of New York. But a nautical navigator in the past would need a way to accurately keep time to use this method.

Before John Harrison invented the spring-based chronometer, most clocks were not reliably accurate in rocking ships. Timepieces prior to Harrison’s chronometer used gravity, such as chained weights and sand or water falling through a narrow passage and pendulums to regulate the movement. Pendulums are affected by the pitch and roll of a ship at sea. This was a problem, as an error of several seconds in timekeeping could affect the outcome by miles. The chronometer changed all of that. By using metal springs and friction-reducing bearings for its regulators, the chronometer keeps time irrespective of gravity and unaffected by movement. (The chronometer employed the same mechanism used in contemporary high-end watch movements, such as Rolex or Patek Philippe.)

Nowadays, atomic clocks in Arizona measure time with great precision and send signals with the time to ships at sea. The marine chronometer is merely there as a backup tool, in case other systems fail.

Another method for celestial navigation involves the position of the moon in relation to the sun. Since the moon is so much closer to earth than the sun, its position can vary significantly within a relatively short distance. With accurate timekeeping, no other information is needed to use this simple navigational method.

In fact, the way ancient Greeks measured longitude millennia before the chronograph was based on the times solar eclipses occurred in various locations.

Even your GPS is somewhat based on celestial navigation. The GPS system is a network of 26 signal-emitting satellites scattered at known geographic positions in orbit. Your device analyzes the strength of each signal and calculates your geographic coordinates on that basis.

Although these are artificial celestial bodies, the very idea of geographic coordinates is based on the earth’s rotations. The significance of the latitude/longitude system for charting out the globe was helpful when most travel was by sea across the oceans. With international air travel, this system was no longer relevant.

But while technology continues to evolve, it seems celestial navigation is here to stay. In fact, a digital-age version of celestial navigation is currently being developed by NASA, called Neutron-star Interior Composition Explorer/Station Explorer for X-ray Timing and Navigation Technology (NICER/SEXTANT) and is expected to be put into use later this year. The system uses flashes of light emitted from pulsars—which are a kind of neutron star.

Furthermore, in 2006, the Naval Academy in Annapolis stopped teaching celestial navigation, as it was considered outdated and obsolete, with GPS and other systems available to the military. After a number of monumental technical failures and compromises, the military decided to reintroduce celestial navigation in 2014, out of concern that other systems could be hacked — but the stars are not susceptible to hacking.

Man’s best technology is unreliable because, like its volatile creator, it is vulnerable to other forces. The stars — those stalwart heavenly servants — are G-d’s soldiers. They are ever faithful in their service, one by one called by name to their respective posts at the very precise time, night after night, since the beginning of creation.

We can count on them to show us the way.