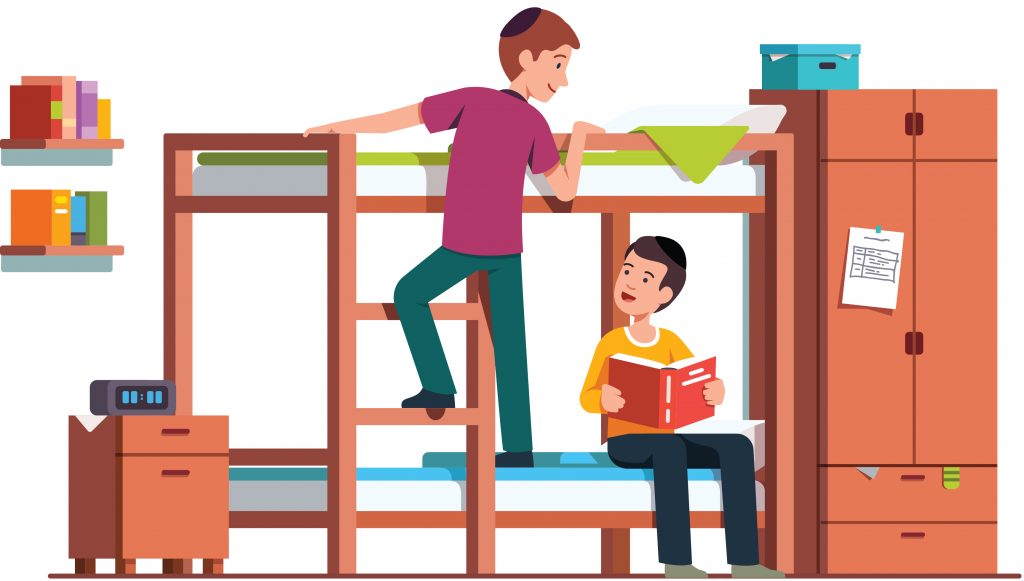 If you have an eighth-grader, then you’ve probably put some serious thought so far into where your son is going for high school, unless there’s one that you work in.

Of course, you want to send him to the school that’s right for him. But all things being equal, the big question is: Should he dorm? Is he ready? When will he ever be ready? Because 14 years at home didn’t do it. Should we try in another 14?

Sure, there are a lot of pros. One pro, for example, is that he’s a teenage boy. If he stays home, who knows what kind of trouble he’s going to get into in his spare time? Whereas if he dorms, he’s going to spend most of his spare time waiting for the shower.

But on the other hand, in your head, he’s just a little boy; you still see him as the kid who once ate an entire yogurt with his hands in the back seat of your car.

So all things being equal, there are the pros and cons:

CON: You don’t think he’s big enough. Chances are your son is still small, with pinchable cheeks and a hat brim that can protect him and one neighbor from the sun, and you think, “He’s too small to live on his own.”

On the other hand, he has to live on his own eventually, unless you’re just assuming that whoever he marries will be an adult. You might as well start him off in the safety of a dorm.

Plus, nothing ages kids faster than dorming anyway. Every time you see him, he’s going to be six inches taller, sound slightly different, and have facial hair in new places. And every off-Shabbos is going to be about buying pants. And that fact guarantees that, no matter the yeshivah, there will be at least some off-Shabbosos. They have to send the kids home at least every few weeks, or else when will they buy pants? Unless they start some kind of gemach.

PRO: He will learn how to fend for himself. He’s going to learn how to find something to eat when he doesn’t like supper, using money that you gave him. He’ll learn how to stretch his snacks and not eat all of the ones you gave him that very first morning, and how to make a week’s worth of laundry last several weeks.

He will learn how to fit all of his worldly belongings into half of a hanging closet, a shelf, a drawer, and the false bottom of a hat box. He’ll learn that if your clothing looks like everyone else’s, you should keep it at least on your corner of the floor.

He will learn how to share a room with three or four other people, which is a skill that he will need when he gets married and keeps finding kids in his bed. He’ll learn how to change his clothes in complete darkness in complete silence by the glow of an alarm clock. And more! (I should write brochures.)

CON: You’re not going to be able to keep on top of his studies. In your experience, your son has to be reminded several times per night that he has homework, plus he has to be reminded to pay attention in class the next day because he clearly didn’t listen today.

And you need to remind him every night. It’s not as if you can do it when he comes home every other week: “Remember to listen for the next two weeks.”

Are you going to call him every night? Leave a note in each pair of socks? That last one is actually a good idea, because you know he’ll get it at least every third day. Where do you leave the note to remind him to change his socks? In his snacks? Then he’ll change his socks 15 times that first day and be done.

PRO: If he dorms, he gets to wake up as late as is humanly possible. There’s a big difference between having to wake up in time for a ride that also has to pick up everyone else in the neighborhood or being able to just roll down the stairs to Shacharis. In a dorm, if your son is dedicated, he can wake up for a 7:40 Shacharis at 7:39 and still make it with time to spare, especially if he’s taken the opportunity of you not being in his business all the time to sometimes sleep in his clothes. (“I’m not sleeping long enough anyway; who cares? I’ve taken longer Shabbos naps.”)

Plus, it’s a little easier to get up in the morning when everyone in the room has to be up at the same time. It’s not like yeshivos have an early Shacharis and then a later Shacharis that takes place while everyone else is eating breakfast. Though they totally should. In your house, every boy has a slightly different schedule, because you had them at different ages (it seemed easier at the time), but the first one is never going to get up and get dressed in the dark while everyone else is still cozy in bed trying to ignore his alarm going off every seven minutes.

So if he’s at home, you have to make sure he’s awake. You have to get up before you actually have to be up, try to wake him without actually waking yourself up all the way, and then go back to bed and attempt to fall back asleep, all so you won’t have to wake up and drive him.

CON: He doesn’t have you telling him to go to bed. When he’s home, you have to remind him to go to bed every night, or else he’ll forget. Based on your experience, if he dorms, he’ll never go to sleep. Dorming is like a constant slumber party, if slumber parties went by whom you were assigned to sleep with. More kids pile into a room than the legal capacity of that room, there’s clothing everywhere, no one gets to sleep until the last guy is tired, and the only way to wake everyone the next day is with the convenient negel vasser that they leave near their beds. Sure, the dorm counselor reminds them to go to bed, but it’s the not-as-earnest reminder of an older bachur who’s not going to have to drive anyone anywhere if they wake up late.

PRO: You’re going to get more done at nights. I work in my house, and with every passing year, I find myself going to bed later and later. Basically, despite the fact that we send my son to bed, he has long ago decided that how late you go to bed should reflect your age. When he was 8, he wanted to go to sleep at 8; when he was 9, he wanted 9; and so on. He’s 13 now. When am I supposed to work? I should really teach him about army time.

My point is that I go to sleep later and later, and my wife does remind me to go to bed, but it’s the half-reminder of a person who knows that she won’t have to drive me anywhere the next morning, because I work in the house. Though I’m starting to understand why, at a certain point in my teenage years, my parents started going to bed at 9 and waking up crazy early.

CON: You’re going to have to buy a whole bunch of stuff for the dorm that he doesn’t have for the house, such as slippers to shower in that are waterproof but also don’t float away. And a bathrobe. And something to carry soap around in besides the pockets of his bathrobe. And also quality, non-embarrassing bedsheets that you’re willing to never see again. But you only have to buy all these things once, because he’s never going to notice when he needs new ones.

PRO: You won’t have to keep driving him back and forth. Even if he’s in a school that has busing, there’s no busing for night seder. And it would be nice to not have to drive him twice a night, because I, for example, am already spending my evenings driving people around — to bar mitzvahs and tutors and to buy pants, plus my high-school daughter has to go to Production, whatever that is. And girls don’t typically dorm, so if there’s something after school, you have to drive them.

Boys dorm, so if anyone should have Production, it should be them. Come to think of it, they should also have some other classes that the girls’ schools have, such as Culinary Arts, using materials they have around the dorm. Let them learn how to make a negel-vasser bowl full of noodles in the washing machine or something. Give the dorm counselor something to do besides take attendance. It’s not as though he’s playing baseball with them.

But my point is that with dorming, there’s no back and forth. You just drive him to school once, with all his worldly belongings in several suitcases, and once a month he comes home with all of it in one laundry bag because he spent all his laundry money on pizza from the pizza shop because he didn’t like the yeshivah’s pizza. n