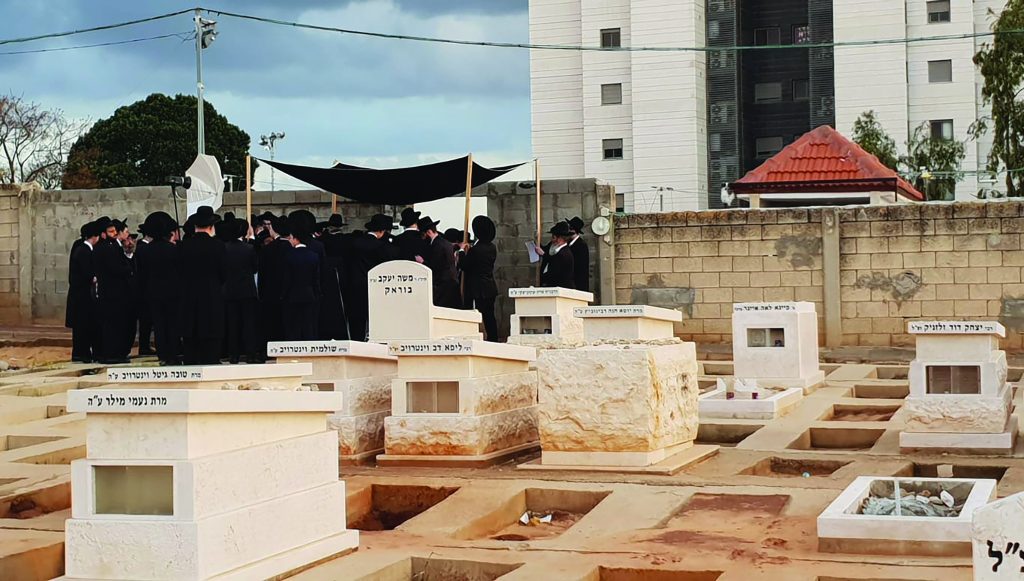 The wedding hall canceled due to the coronavirus shutdown — what now? While most young couples successfully relocated their chasunos to backyards, driveways and living rooms, on Wednesday, March 18, 2020, an orphaned chassan and his kallah held their chuppah in the beis hachaim of the Ponevez Yeshivah in Bnei Brak under the auspices of Harav Mordechai Gross, shlita, Ga’avad of Chanichei HaYeshivot. A similar chuppah was held in a cemetery in Netivot, and there were likely more.

This idea is not as novel as it sounds. These chuppos were modern-day counterparts of an old custom to hold communally-funded chuppos in cemeteries for poor orphans as a segulah to ward off plague.

Let’s take a closer look at this little-known practice.

As there is a lack of documentation on the origin of the cemetery chuppah (also called a “black wedding,” as a black chuppah is used), contemporary historians make the mistake of considering it to be a relatively recent innovation.

A more reliable (but in no way exact) pointer to the dating of conducting chuppos in cemeteries is found in Ohel Elimelech (1910). Its writer, Harav Avraham Chaim Michelson, relates that such an event, attended by the Noam Elimelech and his talmid, the Chozeh of Lublin, was held in 1785. The presence of these towering figures indicates that holding these chuppos was a respected practice at that time and could well have already existed for centuries.

Why, then, are they not on record? Rabbi Avraham Heschel, a chizuk speaker and columnist for Inyan magazine, has researched the topic of minhagim. He points out that the lack of a written reference for a minhag is not proof that it did not exist. If it was firmly entrenched in the fabric of Jewish life, there wasn’t always a reason to write about it. For example, when the minhag to bake schlissel challah received its first known mention in print in the sefer Oheiv Yisrael by the Apter Rav in 1863 (published 40 years after his petirah), it was described as a “very old custom,” indicating that its origins belonged to a much earlier time.

It is likely that cemetery chuppos also have a long history. While we do not have a source in Chazal for these weddings, they are very possibly based on the fundamental concept that Hashem is merciful to those who show mercy (Shabbos 151b). So, while the threat of a deadly epidemic would initially bring people to daven and fast, if the sickness still continued, they would opt to perform an additional measure to secure the favor of Hashem. Rabbi Heschel suggests that they would sponsor special weddings for orphans that encapsulated the unique merit of the mitzvah of coming to the aid of yesomim and the lofty mitzvah of hachnasas kallah in the hope of reversing the Divine decree: Tzedakah tatzil mimaves (Mishlei 10:2)!

For example, when Harav Chaim Kreisworth, zt”l, the Rav of Antwerp, was very sick, he sought the brachah of the Steipler Gaon, Harav Yaakov Yisrael Kanievsky, zt”l. The Steipler advised him to marry off needy brides. Rav Chaim began to do so and recovered, living for many more years.

A Chuppah at a Cemetery

But why were these chasunos held in cemeteries? Juxtaposing life and death would appear to be counterintuitive; in fact, the Vilna Gaon was opposed to visiting cemeteries at any time. Yet the Maharsham, Harav Shalom Mordechai Schwadron (1835-1911), allowed an orphaned chassan who was a Kohen to be married in a part of a cemetery where there were not yet any kevarim. As this chassan could clearly have held his chuppah elsewhere, we can deduce that there was a special advantage to be gained from a cemetery chuppah.

To gauge what this benefit is would demand a full discussion of centuries-long She’eilos U’teshuvos that deal with visiting a cemetery, which space constraints do not allow. We may nevertheless pinpoint that part of the dialogue contends that we visit the cemetery because we want to show Hashem that we recognize that we are (as) helpless (as the dead) and He should therefore help us (Taanis 9b). There is an alternative view that we go there to implore the niftarim to intercede on our behalf — an opinion some poskim strongly disagree with. The Maharil, among others, maintains that we must not ask the dead to intercede for us; instead, we should ask Hashem to have mercy on us in their merit.

Because in some communities it was acceptable to directly request that the niftarim daven on the people’s behalf and in others it was not, the precise rationale behind cemetery chuppos in different places may have differed. What matters is that the choice of the cemetery location was not random; the cemetery chuppah was a simchah, but it was also a very serious and somber affair. It was a plea for life!

Where better than the cemetery to make this plea? It was the optimum place to entreat Hashem to bring an end to an epidemic.

The Chasunah, Up Front

As the second half of the 19th century progressed, we have more records of these chuppos due to rampant epidemics of typhus, yellow fever and cholera that brought death and despair to the Pale (the part of the Russian Empire where most Jews were forced to live). Given the growth of literacy in this period, they are recorded in newspapers and a number of community memorial books (Yizkor bucher) that touch upon hitherto-undocumented parts of everyday life and, on occasion, give us a window to cemetery chuppos up front.

In the memorial book of Apt (Opatow), it is written that when cholera ruthlessly hit the town in 1892, killing many of its inhabitants, the Rav called upon the community to conduct a chuppah at a cemetery. A shidduch was duly arranged between two poverty-stricken orphans and the cemetery chuppah took place. The entire town celebrated this auspicious occasion, and many also came from neighboring villages to attend. The happy couple was privy to a joyful wedding and received sufficient monetary gifts to allow them to set up a home.

It turns out, they were not the only happy ones. Within a few days, the epidemic subsided!

The cemetery chuppos are almost exclusively identified with Eastern Europe, but as Jewish migration began, the practice was exported beyond the Pale. Chuppos conducted in cemeteries were held in both Tzfas and Yerushalayim in 1865 following a massive plague of locusts that destroyed the crops and resulted in many deaths.

Similar chuppos were also held in the United States during the Spanish Flu pandemic of 1918-1919, but by this time they were often ridiculed even by many in the greener — immigrant — population. In the New World, and in the new circumstances of the 20th century, they felt that there was no place for what they now viewed as superstitions and ignorance left over from the “Old Country.”

Canada’s first (and possibly only) cemetery wedding was held in Winnipeg on November 10, 1918, during the flu pandemic. We are told that Harry Fleckman and Dora Wiseman were united at one end of the Shaarei Tzedek cemetery in the city’s North End, a ceremony that drew more than a thousand, including gentiles. At the same time, a minyan conducted a levayah for an influenza victim at the other end of the cemetery. The chuppah had its critics; the city’s Yiddish newspapers excoriated the Rabbanim for allowing such a ceremony to go on. No doubt the newspapers were anxious to refute the impression that Jews were old-fashioned and unsophisticated.

As the 20th century progressed and epidemics were prevented or controlled, cemetery chuppos were no longer practiced (with the poignant exception of a small smattering held in European ghettos during the Holocaust, such as a cemetery chuppah in the typhus-ridden ghetto of Zelechow in 1942).

Who could have imagined that we would ever see the cemetery chuppah again? To the modern mind, science has all the answers, and pandemics had been relegated to the annals of history.

The current coronavirus outbreak has dispelled this myth and brought us back to the realization that our every breath is entirely dependent on Hashem. The recent cemetery chuppos in Eretz Yisrael are a reflection of this realization, and though many may see them as strange, no one denies their pure intent. Nor can we deny the significance of helping others to marry and build a family.

While we all look forward to a time when cemetery chuppos will once again become historical accounts, we should not forget the valuable messages they send.

This writer would like to thank Rabbi Heschel for his contribution to this article.