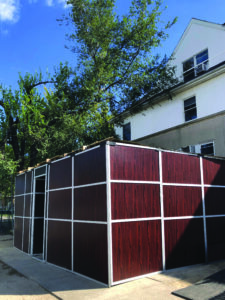 When I was approached to write about the theme of building relationships, I was stumped. In Milwaukee at the time, I ran the assignment by my mother, Rebbetzin Feigy Twerski. She thought for a moment and said, “Why don’t you write about my boys?” I looked at her and queried, “Which boys?” She replied, “My SEED boys. They were like my adopted children and made a difference in our formative years in Milwaukee. When I meet them today, it still tugs at my heartstrings. We built a deep and lasting relationship on challah, blonde brownies, and hot pickles.”

I contacted four of the SEED boys who came to Milwaukee more than 40 years ago inquiring about the bond between them and my parents.

“Greetings from London,” Rabbi Rashi Simon writes. “One of the reasons I was drawn to the Chofetz Chaim yeshivah branch in Milwaukee was because of the Twerskis. I had become acquainted with the late Itchie and Miriam Lowenbraun of Baltimore and through them with the great Rav Shloime Twerski of Denver, zt”l. The possibility of getting to know, ybl”c, [Rav Shloime’s brother] the Milwaukee Rebbe was an attraction for me.

“I was certainly not disappointed.

“I quickly discovered that Rav Michel and Reb. Feige Twerski possessed manifold exalted, inspiring, and captivating qualities, which accounted for their legendary success with kiruv over the course of (by now) 60 years. Ahavas Yisrael is a paramount characteristic of theirs. In the kiruv field there is a saying: They won’t care what you know, unless they know that you care.

“Although I come from a home of hachnasas orchim, the open house of the Twerskis was on an entirely different level. We would say that everything at the Twerskis’ Shabbos table was homemade, including the challos (all yud-beis), the pickles, and the niggunim. We even included the Kedem wine as heimish, as Rebbetzin Twerski’s brother-in-law, the Tzelemer Rav, gives hashgachah.

“Coming as I do from Lafayette, Indiana, non-religious Jews were no novelty to me. If anything, it was a fellow frum Jew who was novel. On the other hand, years of yeshivah in Baltimore and Yerushalayim had accustomed me, perhaps inevitably, to an ‘us and them’ mentality. So the unpretentious non-judgmentalism of the Twerski family was hugely impressive — accepting and welcoming to all out of sheer ahavas Yisrael.

“I recall one Shabbos when there were Orthodox guests from out of town at the Twerski table. Among the other guests was a young man with a long, bushy ponytail, feeling very much at home. The visitors were clearly amazed when the Rebbe invited Mr. Ponytail to lead the bentching.

“The songs from the Twerski Shabbos table have become staples at ours and the Rebbe’s words of wisdom resound in my ears even after 40-some years. ”

Rabbi Moishe Bane shares, “The summers of the late 1970s were magical for a chevra of Ner Yisroel talmidim who were privileged to spend weeks in the Milwaukee community of, and in the actual home of, Harav Michel and Rebbetzin Feige Twerski. We had already experienced love and care within our respective families and from our Rebbeim in yeshivah, but never before had we been embraced with warmth and joy by individuals with whom we had no familial or organizational connection.

“For many of us, those summers remain pivotal to our ongoing relationship with Torah and Yiddishkeit and continue to inspire a deep sense of care for Klal Yisrael. Such lifelong influence is rather predictably felt by anyone spending significant time with Gedolim. Less predictable is that those summers, at least for me, also framed a perception of what marriage is supposed to be.

“One example happened several times during my learning sessions with the Rebbe. We were repeatedly interrupted by phone calls from around the world seeking the Rebbe’s guidance. A couple of years later, I knew that I had met my bashert when I could finally imagine mimicking the Rebbe’s occasional words to a caller that he was including the Rebbetzin in the conversation because ‘she is far more insightful than me in regard to the issue that you are confronting.’

“It is lessons by example that can sustain relationships over 40 years.”

“Lifelong relationships,” says Rabbi Shaya Milikowsky, “that span thousands of miles and include thousands of people are unique. It is a strong relationship that endures even though we may have not seen them personally in many years. That is a rare accomplishment.

“When we went as bachurim for the SEED program, we saw people who opened themselves, their families, their total lives in order to have us come in and help be marbitz Torah in their community. The Twerskis gave their time, their home, their delicious food and their care. We had kumzitzes where we sang for hours and the Shabbos meals included 40 or 50 guests besides us bachurim who joined them week after week.

“We felt that we were cared for and respected for who we were. Each individual felt that the Twerskis went the extra mile to make him feel welcome and loved. Even though they had, kein ayin hara, a large family, the Twerskis made us feel as though we were the focus and center of their attention.

“If someone is willing to openly embrace others the way the Twerskis did during our years in Milwaukee, it creates a relationship that lasts forever.”

“I come from a Litvishe family,” comments Rabbi Elazar Prell, “so this was my first exposure to Chassidus, especially Twerski Chassidus. It was an open house and we had tisch on Shabbos where we sat and sang zemiros and heard amazing divrei Torah. I still recall the vort the Rebbe said the first week we were there. It made an awesome impression on me.

“Officially we were there to support and aid the Rebbe in the work he did all year long in his community. We were an infusion of yeshivah guys who helped in running the day camp and interacting with the community as a whole. The Twerskis appreciated what we brought to Milwaukee. They enjoyed having bnei Torah there. I was there twice, the first time before I started teaching and the second after I had taught for a year. Each time I was enveloped by their warmth and their open house.

“The zemiros were memorable and the song ‘V’yesharim K’cholelim’ was the Rebbe’s composition the year I was there. Their Shabbos table was a unique experience.

“I kept in touch over the years by phone and then got lucky when a cousin of mine married a Milwaukee boy. The Rebbe came along with his son, Rabbi Benzion, and I was zocheh to see them in person. Rabbi Benzion made sure that I received the shul bulletin and I was informed about the Rebbe’s first concert in honor of his mother’s first yahrtzeit. I traveled with my wife and four children for Shabbos and to attend the concert. It was a truly special event. It was at the second concert that I had another opportunity to connect in person and also fit in a quiet Shabbos in between. It is a relationship built on warmth and the open, loving embrace of the Twerskis.”

In truth, a meaningful relationship works both ways. Harav Twerski shares his thoughts about the SEED boys:

“The summers of the late 70s, when for several years Milwaukee was blessed with an inspired and spirited group of SEED volunteers, stand as a special chapter in the maturation of our Torah community. During this period, a dozen remarkable young men, Yeshivah students from Ner Yeshivah of Baltimore, came to share their wisdom and enthusiasm with our, then, young and struggling kehillah, and thereby etched their names in our hearts forever. They came, their eyes shining with eagerness to teach, their hearts full of hope to inspire, their minds thirsty to learn, their neshamos yearning to sing…

They could not have known, nor could we have predicted, the impact that they would have on the Rebbetzin, myself and our children. I daresay their presence expanded our family. Until this very day, when we hear their names and their singular contributions to Klal Yisroel, we kvell with nachas. They have made us so proud that we played a role, however modest, in their very remarkable lives and careers. In essence, they remain “SEED volunteers,” generously of their splendid talents and Torah scholarship, to move Jews closer to the Ribb’ono Shel Olam. They came to visit, and never left our hearts. We are grateful to all of them forever.

Rebbetzin Twerski points out that the relationships developed and deepened over the years: “When they were with us we could see and appreciate the uniqueness, promise, and potential [of each bachur]. We watched as the years went by, the fruition and actualization of this promise. They made a contribution to our community in their youth and now they have made their mark in the world at large. Over the years when they went through normal struggles in life, just like our own children, we were there for them as a resource. Now, like with our own children, we counsel with and run things by them. It is a very gratifying and fulfilling relationship.