FromINYAN Article The Art of Appreciation: An Interview With Harav Yitzchok Dwek 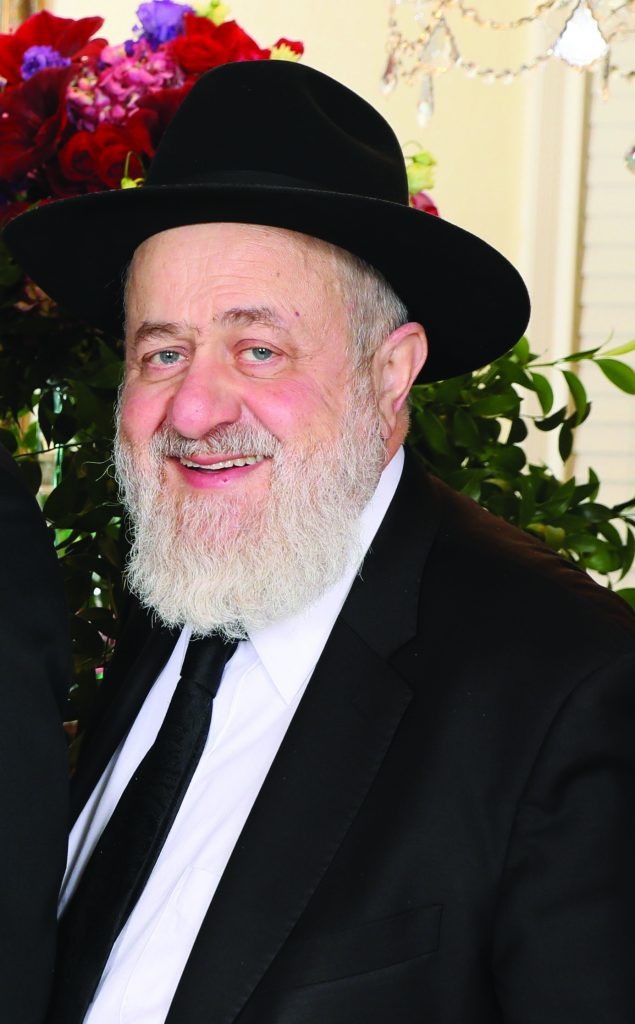 Our Sunday night shiur had its humble beginnings in the small living/dining room of my basement apartment. At 7:45 p.m. prompt, rain or shine, we would squeeze a hodgepodge of folding chairs around the couch and eagerly gather to hear words of chizuk from Harav Yitzchok Dwek, shlita. The years passed and the shiur grew — almost as if with a mind of its own. We moved, acquired a set of matching folding chairs, set up a robocall system, and before we knew it, over one hundred women were receiving the calls. Phone numbers were exchanged, friendships blossomed, shidduchim were made, but the greatest benefit we all received was the dose of heartfelt dvrei Torah that recharged our spiritual batteries for the week ahead. In his inimitable style, Rabbi Dwek inspired us and touched our hearts on a variety of topics. But really, there was only one topic: bitachon — and specifically, how appreciation leads to bitachon.

Here I am, at the Rav’s home. It has been a long eight months. Ever since we received the phone call that our beloved Rabbi Dwek had contracted COVID-19 and was in critical condition, we have been finishing Tehillim daily as a zechus for his recovery.

Back in April, when the Rav’s condition was still dire and the doctors’ hopes for his survival were slim, Chaiky Spira, a devoted attendee of the Sunday night shiur, called me.

“I just wanted to let you know that I baked cookies for Rabbi Dwek’s seudas hodaah.”

When those cookies graced the festive table at his seudas hodaah a few months later, we were overwhelmed with gratitude, yet not surprised. Rabbi Dwek had taught us well. Nothing stands in the way of a Yid’s bitachon.

I ascend the steps eagerly, excited to hear pearls of wisdom from Rabbi Dwek once again. Yet this time, it is in the comfort of the Rav’s home as he undergoes dialysis for his damaged kidneys.

I enter the room. The Rav is lying on the bed, attached to numerous tubes. Travis, the nurse, is punching numbers into a monitor. I notice the big, Thank You, Hashem sign on the opposite wall.

When I tell the Rav I want to discuss Hallel V’hodaah, his eyes light up.

“On Sukkos I took my wife and daughter on a Chol Hamoed trip to the cemetery on East Seventh Street,” he begins. “Ah, life is limited! We have to appreciate every moment that we have…”

“There is so much to be grateful for. I can walk, I can talk, I can give a shiur, I can go up the stairs — do you know that I had a trainer for months to teach me how to climb the stairs?”

He pauses once more as Travis takes his blood pressure, then turns to me.

“In Shemoneh Esrei we say Refaeinu … ki sehilaseinu — heal us because we are going to say thank you! That is enough of a reason for Him to heal us.”

The dialysis machine beeps in the background.

“I can complain that I have to be tied to this machine for four hours a day, or I can see all the good in this situation… I have the dialysis in my room, I don’t have to go to the hospital, I have a great guy like Travis keeping me company…”

“We say each day before Az Yashir — ‘va’yaar Yisrael es hayad hagedolah …’ The Ben Ish Chai says this refers to the hand of Basya that extended to retrieve Moshe Rabbeinu from the river. But why are they mentioning that now, at the time of Krias Yam Suf?

Because that is the essence of gratitude. Thank Him not just for what He has done now — go back. Thank Him for everything that preceded that.” Rabbi Dwek closes his eyes. “He didn’t just take me out of Kimball. He took me out of Syria in 1960!”

Being released from Kimball Hospital was no minor miracle, to say the least. Rabbi Dwek was the only one in his unit who survived.

“Can you tell me more about your experience with COVID?” I ask.

Rabbi Dwek nods and takes me back to March 2020.

“My wife and I went to the hospital for a lung X-ray. The results showed that we needed to be hospitalized. She was put in a room across the hall from me, but we weren’t allowed to see each other. Then my wallet was stolen…”

Enough to make anyone feel despair, but not Rabbi Dwek — nor his Rebbetzin.

She was discharged on Erev Shabbos Hagadol, extremely weak — yet the hospital needed the space. On her way out, the doctor turned to her and informed her gently that they did not expect her husband to make it. She dismissed his words entirely, knowing full well Who is in charge. The Rav’s heart stopped beating the next day and the doctors worked furiously to save his life. Meanwhile, Rebbetzin Dwek was setting a place at the seder table for her husband and preparing his matzos …

“The whole time, despite being in a coma, my brain was whirring with countless thoughts,” the Rav continues. “I thought I was dying. I wondered what death would feel like, what the malach hamaves would look like, what chibut hakever would be like…”

But he was relaxed, simply letting himself be taken wherever Hashem wanted him to go.

“I thanked Him for the wonderful life He gave me. I recall saying ‘Hashem nassan v’Hashem lakach.’ I was really at peace.”

Then He saw his neshamah leave his body.

“It was a painless experience. My body was white and part of it separated itself from the rest and rose up to shamayim. It seemed as if I was in Eretz Yisrael.” There are tears in the corner of the Rav’s eyes. “I saw a pile of dirt ready to bury me.”

But Heaven decreed otherwise. After two weeks of being unconscious, the Rav awoke, yet the recovery was far from over.

Rabbi Dwek smiles. “I will tell you a mashal. There is a family sitting together eating a Shabbos seudah. A gangster breaks in, ties up the whole family, and robs the house. In the middle of all the commotion, a neighbor comes in, beats up the gangster and saves the family. They are so grateful to this neighbor — they want to make a dinner in his honor. And then they find out that he hired the gangster.

We thank Hashem for saving us from the Yevanim. But He is the One who sent them in the first place. Why are we thanking Him?”

After six plus years of Rabbi Dwek’s shiurim, I think I know the answer.

“Remember, when we are in pain, He is in even more pain. It must be that if He is giving us problems then it is for our good! The biggest favor for us is the pain. Hashem is communicating with you, He wants a relationship, He wants you to cry out to Him, He is helping you become better.” The Rav repeats a phrase that we have heard often. “Not having a problem is the worst problem someone can have.”

I smile as he adds another favorite phrase, a Chinese saying.

“A head without a headache is already dead and found in the grave.”

I am reminded of an incident the Rav shared with us at a shiur right after Chanukah of 5780. Two childless couples sought counsel with Rabbi Dwek and he encouraged them to increase their bitachon by thanking Hashem for their childlessness. With his guidance and encouragement, both couples learned sefarim on emunah and bitachon and came to a level where they could genuinely thank Hashem for their problem. They truly felt His love and embrace and deeply felt that all He was doing was for their good. He also encouraged them to daven for each other. Within months, both couples had due dates on — Zos Chanukah.

The Rav sits up straighter. It is obvious that this is his favorite topic.

“Ma ashiv l’Hashem, kol tagmulohi alai. Imagine a gvir picks a yasom off the street. He adopts him, outfits him, educates him, marries him off, buys him a house … The boy wants to know, how can I repay you? The answer is kos yeshuos esa — I did all this to make you happy, I want to see you happy! Continue being thankful and I will give you even more!

“That is Chanukah. Lehodos u’lehallel. Stand in front of the neiros for a half hour and count your blessings. We have eight days of full Hallel.” The Rav pauses. “The Shechinah is in your home; it is an opportunity for closeness. And the key to a close relationship with Hashem is appreciating all that He has done for you.”

It is time for me to leave, though I could stay here all day. I slowly get up and thank the Rav for his time.

“Remember,” he calls after me as I step through the doorway. “It is not the happy who are thankful. It is the thankful who are happy.”

I smile and jot that down.

How true. And I think I have just seen the greatest proof of that.

Rabbi Dwek would like to thank the hundreds of people who came out in the past few weeks to be swabbed as possible kidney donors. Please continue to daven for Yitzchak Mordechai ben Rose Nizha.