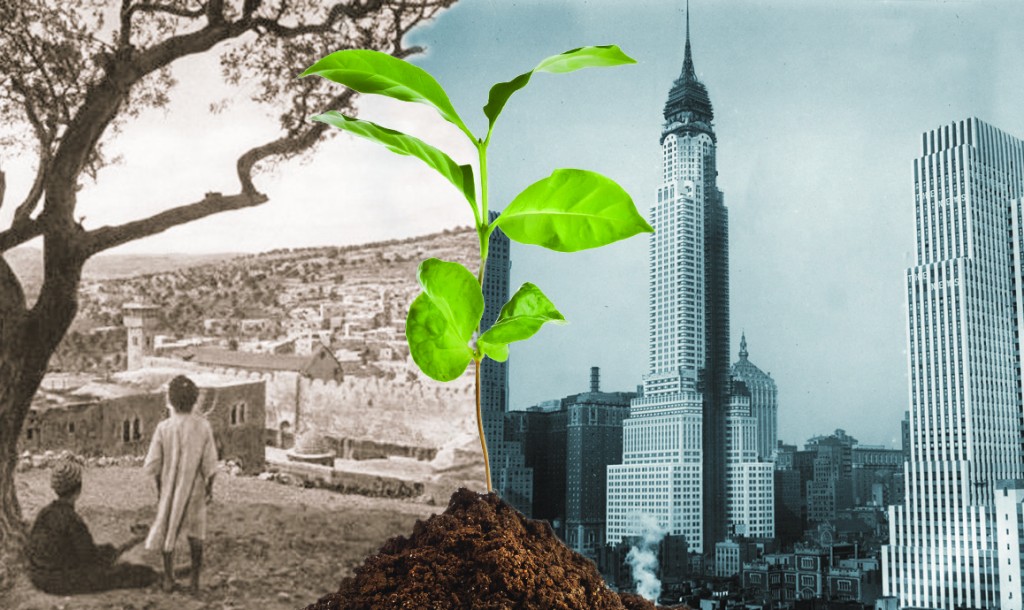 The excitement was palpable as the various branches of the Rothstein family stood around the Seder table, waiting for Papa to begin. There were Papa and Mama, Manny, Esther and their three children, Zayit and Orna (by now honorary Rothsteins), with their Mani, and Mutty and Breindel, days away from their happy occasion. By hook and by crook, they had all made their way to Yerushalayim for the Yom Tov, and it was a grand reunion.

There was so much to bless Hashem for. Emanuel had made a bundle with the sale of the printing press, which was one of the few businesses that had remained solvent despite the Crash. With money from the sale, he was able to buy a large home in Yerushalayim, and make investments that provided a comfortable monthly income.

There had been some moments when it seemed there would be no blessing.

The Zayits’ baby, Mani, had brought a tremendous amount of light into their lives. They knew they could always calm their little Mani, named in the Sephardic tradition after their benefactor, Emanuel, by placing him next to his Uncle Beni. The two of them would smile on the world and cause everyone to smile as well.

There had been the painful separation, when Mima Faiga had taken the young ones to Colorado to be with her husband, Zalman. Breindel had stayed behind with her husband, Mutty. They had a room in Mama and Papa Rothstein’s spacious apartment. She and Mama already knew each other, of course, but still, Mama and she had to adjust to their new roles and relationship.

Everyone had their own story to tell of how they had ended up in Yerushalayim. Each one had arrived on a ship of tales. Manny and Esther had remained in the holy city. After Manny sold the press, he had brought Mama and Papa over. Mutty and Breindel had escorted them, not planning to remain. Once they arrived, however, and with nothing holding them to the United States, they could not bring themselves to return. The Zayits had planned to remain in America until Mani’s birth, but as he had required further treatment, they stayed for more than a year, until Mima Faiga’s departure. Only then did they use the return tickets Manny had so thoughtfully provided them nearly two years before.

The sea journey had been quite arduous. Papa, Mama, and Breindel had spent a large portion of the journey in their staterooms, unable to move. It had been Mutty who had cared for them all. Of all the family, Mutty was perhaps the least recognizable. He had grown from a young boy into a serious and responsible young man upon whose shoulders was great responsibility, and upon whom others had learned to rely. Living through the riots in Chevron, followed by the great mitzvah he had performed in caring for his father, had changed him profoundly.

Their blessings were endless. Hashem had provided them with all they needed.

Their adjustments hadn’t all been easy. There was some affliction, but each one had the support of the others. Papa’s health problems came and went. Esther had had to rest each time another child was expected.

There had been Mani. And before Mutty’s wedding, Mutty had asked Manny and Esther to go the mass grave of the kedoshim to invite them to the chasunah. They would never be forgotten.

Building a home in Eretz Yisrael, while the most satisfying of endeavors, has its difficulties as well. With the help of Manny and Zayit, the new families finally settled in. Papa and Mama lived with Manny and Esther. Mutty and Breindel had settled in on a small farm near the Zayits. Manny had also helped Mima Faiga travel and settle in Colorado. They had all moved and changed  locations, but they kept the apartment in New York, “in case of emergency.”

Through his good works and careful planning, with the help of Hashem, Manny made sure there was food on every table. The Zayits returned to their farm and enjoyed its fruits. Mutty enjoyed working his olive orchard. The small knotty trees gave him a tremendous amount of satisfaction, as did the making of the olive oil.

Once the olive oil was prepared, they sold it and also enjoyed its fruits. The fact that by now Manny and Esther had merited the care and raising of three little neshamelach was more joy than they could have ever imagined.

Each one had their blessings to thank Hashem for. But the one who bentched with the deepest concentration was Mama.

Out of everyone, her joy was the most profound. It had been so hard for her to let the boys go to Eretz Yisrael, and she feared never seeing them again. Now, to live in Eretz Yisrael, with both her fine sons married and building their families had never entered her imagination before it came to pass.

Mama found many ways to express her hakaras hatov to Hashem. She would visit the Kosel and Kever Rochel whenever she could; her siddur and sefer Tehillim never left her hands. Under the guidance of Schwester Selma, she began to volunteer at Shaare Zedek. She became the Schwester’s indispensable right hand, helping her in her good works.

Papa spent his days in peace and prosperity, reading, learning, and having nachas. Esther continued her gardening and dollmaking along with raising her growing family. Emanuel continued his learning, and grew over time to become a serious talmid chacham. It was what he’d always wanted, and after considerable effort, Hashem had fulfilled his wishes.