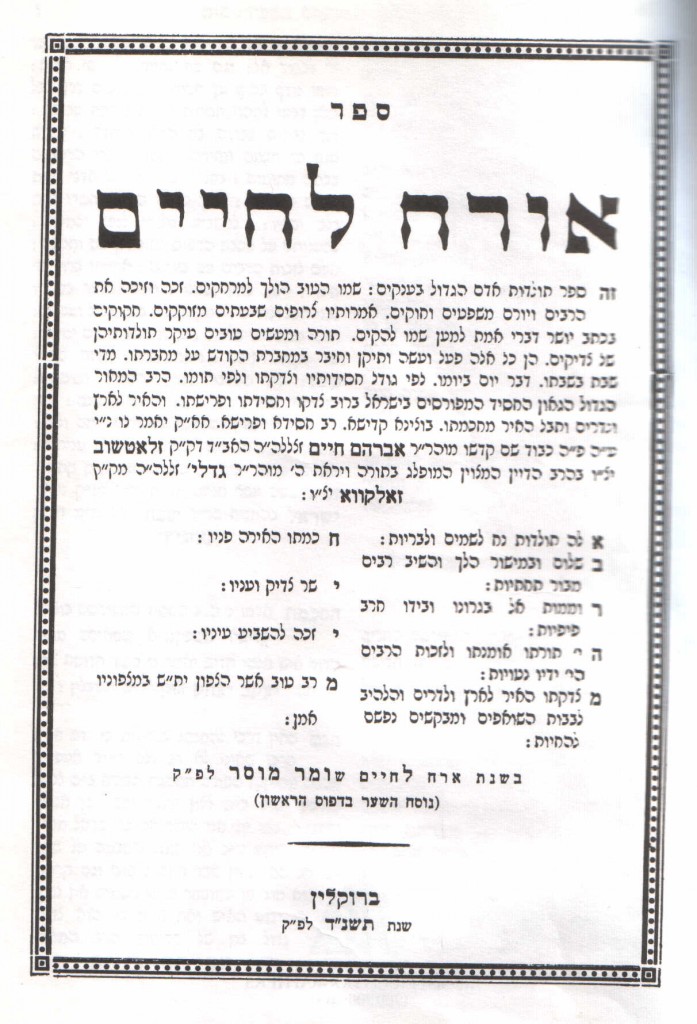 In 5129/1369, Jews of Sicily were required to wear a special badge signifying that they were Jewish.

Harav Avraham Chaim was born c. 5510/1750. His father was Harav Gedalyah, who served as Rav of the town of Zolkova and was the son of Harav Binyamin Zev, a descendant of the Maharsha.

Reb Avraham Chaim was a devout talmid of the Rebbe Reb Dov Ber, the Maggid of Mezritch, and after his petirah he learned from Harav Shmuel Shmelke Horowitz of Nikolsburg (an uncle of his first wife) and Harav Yechiel Mechel of Zlotchov.

He served as Rav in Zbarov until the year 5553/1793 when his father-in-law, Harav Yissachar Dov, ascended to Eretz Yisrael. Reb Avraham Chaim, replaced him as Rav in Zlotchov.

Harav Efraim Zalman Margulies writes about Reb Avraham Chaim in the introduction to the sefer, Orach L’Chaim: “He was a great man in Torah and in Chassidus … and was fluent in the secrets of the Torah.” He would spend most of the day davening and learning with extraordinary devotion and holiness. He also dedicated a lot of time to tzedakah and chessed.

His sefer, Orach L’chaim, bears haskamos of great Torah luminaries such as Harav Levi Yitzchak of Berditchev, the Maggid of Koshnitz, the Chozeh of Lublin and the Apter Rav, among others. This sefer, one
of the distinguished sifrei Chassidus, was printed by his stepson after his petirah. He also was mechaber of Pri Chaim on Avos and Haggadah shel Pesach, and a number of his chiddushim are printed in the sefer Hafla’ah.

In 1790, President George Washington delivered his first State of the Union address to Congress in New York.

In 1815, U.S. forces led by Gen. Andrew Jackson defeated the British in the Battle of New Orleans — the closing engagement of the War of 1812.

In 1863, America’s First Transcontinental Railroad had its beginnings as California Gov. Leland Stanford broke ground for the Central Pacific Railroad in Sacramento. The transcontinental railroad was completed in Promontory, Utah, in May 1869.

In 1912, the African National Congress was founded in Bloemfontein, South Africa.

In 1918, President Woodrow Wilson outlined his 14 Points for lasting peace after World War I.

Mississippi became the first state to ratify the 18th Amendment to the Constitution, which established Prohibition.

In 1959, Charles de Gaulle was inaugurated as president of France’s Fifth Republic.

In 1964, President Lyndon B. Johnson declared a “War on Poverty” in his State of the Union address.

In 1973, the Paris peace talks between the United States and North Vietnam resumed.

In 1982, American Telephone and Telegraph settled the Justice Department’s antitrust lawsuit against it by agreeing to divest itself of the 22 Bell System companies.

In 2005, the nuclear sub USS San Francisco collided at full speed with an undersea mountain south of Guam. One man was killed, but the sub surfaced and was repaired.

In 2011, U.S. Rep. Gabrielle Giffords (D-Ariz.) was shot and critically wounded when a gunman opened fire as the congresswoman met with constituents in Tucson. Six other people were killed, 12 others were injured.