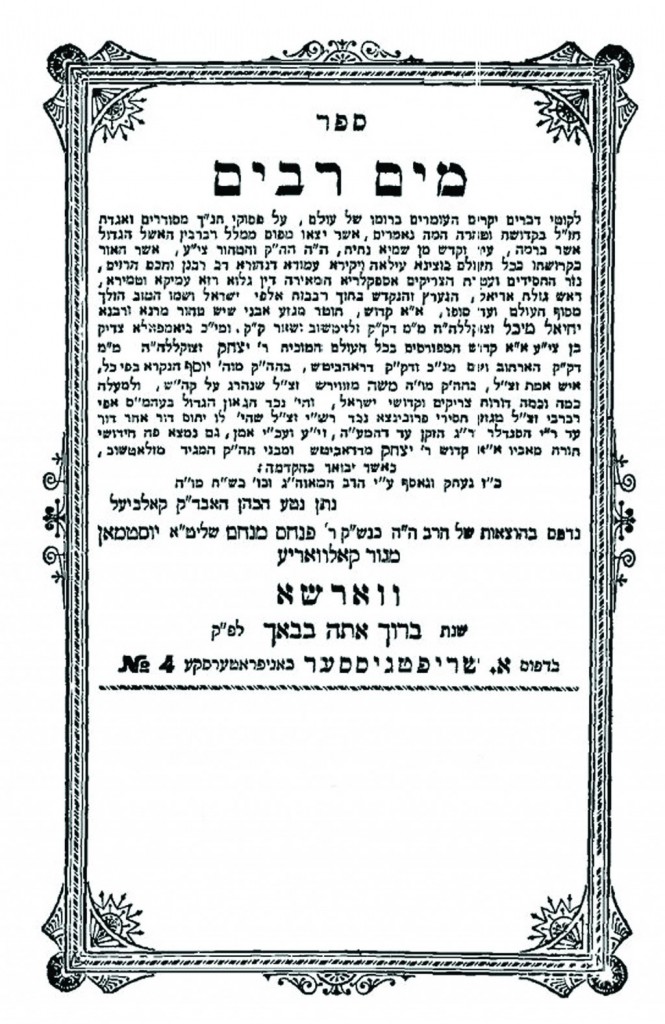 In 2490/1271 B.C.E, the 30-day period of mourning for Moshe Rabbeinu had concluded. After Hashem told Yehoshua to cross the Jordan River, Yehoshua commanded the officers to prepare the nation for the journey.

In 3339/422 B.C.E., Yechezkel Hanavi received Hashem’s nevuah about the pending demise of the nation of Mitzrayim.

Harav Yitzchak was the son of Harav Yosef Sprabidlider. The family descended from Harav Yitzchak Chayus, Rav of Prague and mechaber of Apei Ravrevai.

Reb Yitzchak resided in Ostroha, and was in the group of 10 choice avreichim who were supported by the naggid Reb Yozpe and were known as the top lamdanim in the city.

Later, Reb Yitzchak served as Rav in a number of communities. He was Rav of Brod and also served as the Maggid Meisharim in the city. He also served as Dayan on the beis din of Harav Yitzchak of Hamburg.

Reb Yitzchak was known for his many mofsim.

Many of Reb Yitzchak’s divrei Torah were later published in the sefer Mayim Rabbim, which was a compilation of the divrei Torah of his son, Harav Yechiel Michel, the Maggid of Zlotchov.

Reb Yitzchak was survived by his son Harav Yechiel Michel, the Zlotchover Maggid.

In 1913, King George I of Greece was assassinated in Thessaloniki.

In 1942, President Franklin D. Roosevelt signed an executive order authorizing the War Relocation Authority, which was put in charge of interning Japanese-Americans, with Milton S. Eisenhower (the younger brother of Dwight D. Eisenhower) as its director.

In 1962, France and Algerian rebels signed the Evian Accords, a ceasefire agreement which took effect the next day, ending the Algerian War.

In 1963, the U.S. Supreme Court, in Gideon v. Wainwright, ruled unanimously that state courts were required to provide legal counsel to criminal defendants who could not afford to hire an attorney on their own.

In 1965, the first spacewalk took place as Soviet cosmonaut Alexei Leonov went outside his Voskhod 2 capsule, secured by a tether.

In 1974, most of the Arab oil-producing nations ended their embargo against the United States.

In 1990, thieves made off with 13 works of art from the Isabella Stewart Gardner Museum in Boston. (The crime remains unsolved.)