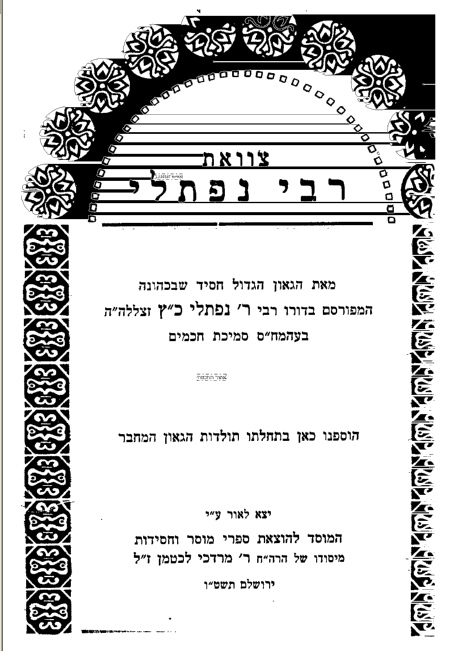 In 3884/123 C.E., the Tanna Rabi Akiva was arrested by the Romans. He was subsequently tortured and killed al kiddush Hashem on Yom Kippur. The story of his killing, along with the other nine Harugei Malchus, is related in the stirring piyut, Eleh Ezkerah, recited during the Yom Kippur davening.

A taanis tzaddikim was established to commemorate this event as well as the killing of 20 Jews during that time. (Shulchan Aruch 180:2)

Harav Naftali Hakohen Katz was born in Prague, the son of Harav Yitzchak Hakohen, son-in-law of the Maharal of Prague, zt”l, and descendant of Maharam Padwa.

His grandson and namesake, the Semichas Chachamim, records that Reb Naftali was one of the most respected Rabbanim of his time, who exchanged halachic correspondence with the Taz and other Gedolim.

Reb Naftali was a maggid in Prague, and then a Dayan in Prostitz, Nicholsburg, and Pinsk. His final position was in Lublin, where he was Dayan and Rav.

At the same time, the famous Rav Heschel of Cracow headed the yeshivah in Lublin.

His sons were Harav Yitzchak, maggid in Prague and Lublin, and Harav Chaim, who succeeded to his position.

In 1513, English forces defeated Scottish invaders in the Battle of Flodden Field; more than 15,000 men were believed killed, including the King of Scots, James IV.

In 1543, Mary Stuart was crowned Queen of Scots at Stirling Castle, nine months after she was born.

In 1919, some 1,100 members of Boston’s 1,500-man police force went on strike. (The strike was broken by Massachusetts Gov. Calvin Coolidge with replacement officers.)

In 1943, Allied forces landed at Salerno and Taranto during World War II.

In 1971, prisoners seized control of the maximum-security Attica Correctional Facility near Buffalo, N.Y., beginning a siege that ended up claiming 43 lives.

In 1986, Frank Reed, director of a private school in Lebanon, was taken hostage; he was released 44 months later.

In 1997, Sinn Fein, the IRA’s political ally, formally renounced violence as it took its place in talks on Northern Ireland’s future.