In 5698/1938, an embargo went into effect on the properties of Austrian Jews. 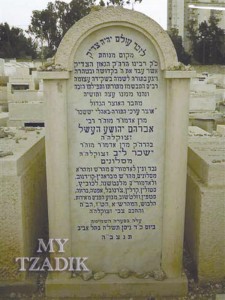 Harav Avraham Yehoshua Heschel Weinberg was born in 5658/1898. His father was Harav Yissachar Leib of Slonim, son of the Divrei Shmuel and grandson of the Yesod HaAvodah.

He was raised in the court of his grandfather, the Divrei Shmuel, in Slonim.

He married the daughter of Harav Dovid Weidenfeld of Warsaw, a talmid chacham who was also the father-in-law of the Beis Yisrael of Ger in his zivug sheini (after the War). After his marriage, Reb Avraham Yehoshua Heschel settled in Warsaw, near his father-in-law.

Following the petirah of his father on 28 Nisan 5688/1928, Reb Avraham Yehoshua Heschel was asked to lead the Slonimer Chassidus, but he was reluctant to become Rebbe; he only agreed to go from Warsaw to Slonim at certain set times.

However, after the petirah of his father’s brother Harav Avraham (Rebbe in Bialystok and later in Baranovich) on Rosh Chodesh Iyar 5693/1933, Reb Avraham Yehoshua Heschel agreed to go to Slonim as Rebbe.

In 5695/1935 he moved to Eretz Yisrael and, settling in Tel Aviv, opened a beis medrash for the Slonimer Chassidim there.

He wrote an encyclopedic work on all topics mentioned in Tanach, based on Chazal in the Gemara and Midrashim. Seven volumes of this monumental work have been published to date as Otzar Arachei HaTorah — B’Ohalei Yissachar, named for his father.

Reb Avraham Yehoshua Heschel was niftar on 25 Nisan 5738/1978 at the age of 80. He was buried in Bnei Brak, near the kever of the Ozherover Rebbe.

He had two sons: Harav Shmuel, who was deputy mayor of Bnei Brak, and Harav Aryeh, Rosh Yeshivah of Yeshivas Shuvu Banim.

In 1775, the first American society for the abolition of slavery was formed in Philadelphia.

In 1828, the first edition of Noah Webster’s American Dictionary of the English Language was published.

In 1865, President Abraham Lincoln was shot and mortally wounded by John Wilkes Booth during a performance at Ford’s Theater in Washington.

In 1912, the British liner RMS Titanic collided with an iceberg in the North Atlantic at 11:40 p.m. ship’s time and began sinking. The ship went under two hours and 40 minutes later with the loss of 1,514 lives.

In 1935, the “Black Sunday” dust storm descended upon the central Plains, turning a sunny afternoon into total darkness.

In 1949, the Wilhelmstrasse Trial in Nuremberg ended with 19 former Nazi Foreign Office officials sentenced by an American tribunal to prison terms ranging from four to 25 years.

In 1981, the first test flight of America’s first operational space shuttle, the Columbia, ended successfully with a landing at Edwards Air Force Base in California.